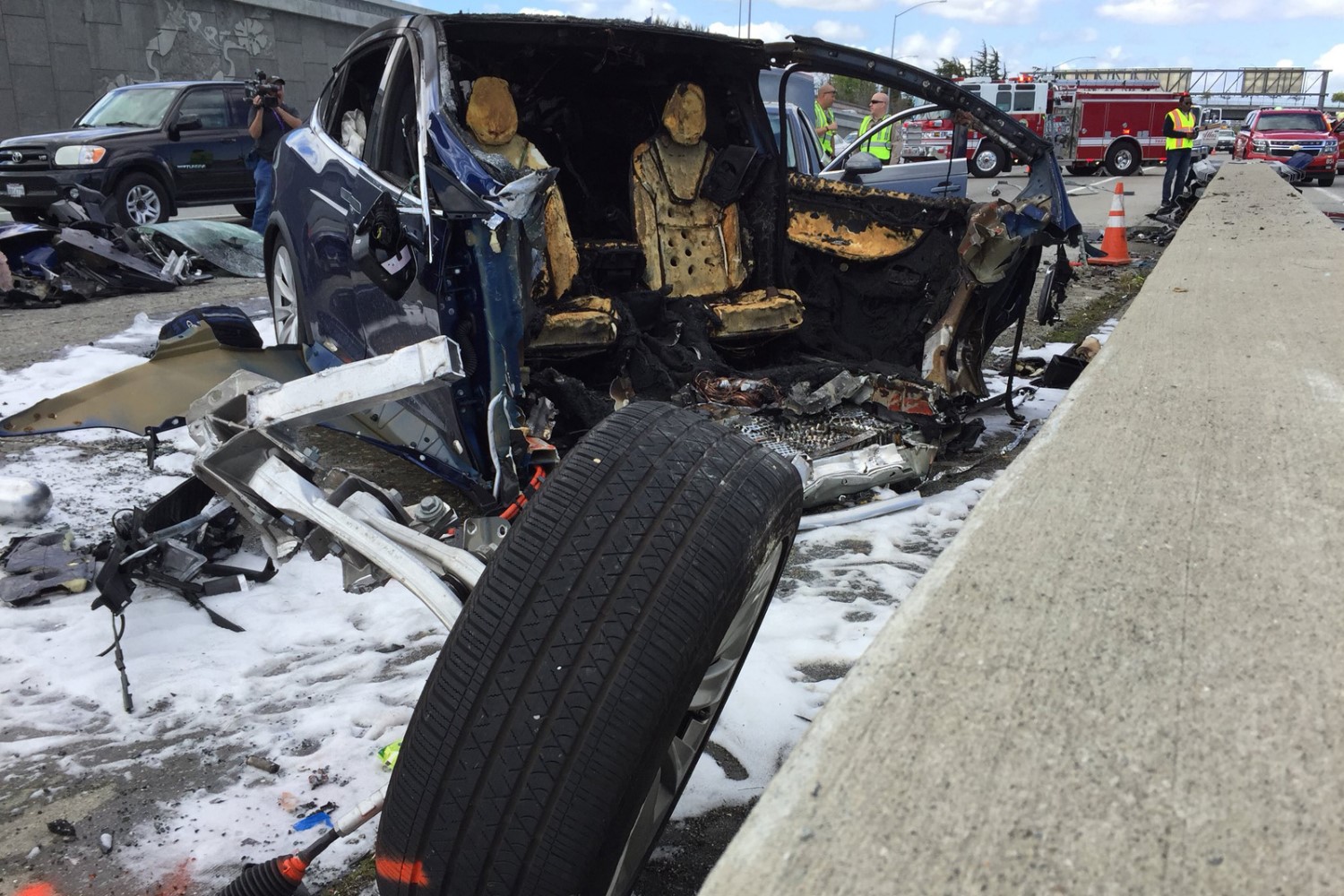 KTVU investigation has uncovered new information about the deadly Tesla crash in Mountain View earlier this year along with a serious warning for all firefighters responding to electric vehicle crashes.

KTVU has obtained a 13-page safety alert written by Mountain View Fire Chief Juan Diaz, in which he highlights the dangers firefighters faced while responding to that wreck, including a high-voltage battery they had no way to stop.

On March 23, a Tesla Model X slammed into a safety barrier on Highway 101 and erupted in flames. The 38-year-old driver died.

Firefighters say they put the fire out in two minutes but soon discovered the battery fire in the electric vehicle would smolder for hours and reignite multiple times, even days later.

"The battery began to overheat even though we had already cooled the battery and it continued to reignite," said Diaz. "We don't have the tools to deal with a battery that is completely, basically destroyed."

The problem, he says, was a lithium-ion battery that continued to flow with electricity after it was damaged in the high-speed crash, which the NTSB is still investigating.

The other concern firefighters say they have when dealing with electric vehicles is possible electrification of the vehicle.

Most manufacturers have taken action to help first responders by installing a kill switch called a "cut loop" but in the Mountain View incident that device was destroyed in the crash and firefighters had no way to safely cut off the electricity.

"If it's a rescue, that's where the real risk comes in cause I'm going to be cutting that vehicle, I want to make sure I'm not cutting through an electric cable," said San Jose Fire Dept. Captain Mitch Matlow.

For departments like San Jose Fire, that's not the only danger with electrical vehicles.

If a battery is severely damaged and catches fire, that fire can burn hot and long at more than 900 degrees until the battery is exhausted, according to the memo penned by Diaz.

In the Tesla crash, firefighters called Tesla engineers who had the tools and training to partially dismantle the battery. But even then, the threat wasn't over.

"In this particular case, six days later, the temperature inside those cells increased to the point of ignition. That's why the car reignited," said Diaz. "You have stored energy that is frankly unstable."

Diaz says it was only after the NTSB and Tesla de-energized the battery two weeks later that it was finally safe.

In the memo, shared with every fire department in the Bay Area, the fire chief also warns of another dangerous scenario firefighters could face: if a house catches fire with an electric vehicle parked at home, the damaged car battery could reignite later.

"If the battery is damaged, then we're going to have to basically monitor that vehicle for a prolonged (time) — could be days — to make sure it doesn't reignite," said Diaz.

With tens of thousands of new electric cars hitting the market, the threat is greater than ever, according to auto experts.

"Every auto manufacture out there plus new manufactures have got vehicles either just coming on the market or soon to be on the market," said Michael Coates, who is editor of the online auto publication "Clean Fleet Report."

"It's a challenge," said Matlow. "Because every time they come out with a new model car, whether it's electric, gas or diesel or hydrogen or alcohol-powered, it's got something new with it and we have to modify our techniques to deal with that individual hazard."

Most manufacturers including Tesla offer online training and tools for first responders, but that’s not always the case.

The Chinese company BYD that makes electric buses in Lancaster, California, doesn't have that emergency kill switch, the "cut loop", installed at all, according to the memo obtained by KTVU.

"We have a ways to go in educating firefighters. Especially in areas of the country that they really haven't seen that many electric vehicles yet," said Andrew Klock with the National Fire Protection Association.

San Jose Fire says just like the hands-on live fire training it requires, every recruit is also taught about the hazards of electric vehicles.

"As they become more prevalent, they are getting in more crashes and we have to be aware of that," said Matlow.

In the meantime, Mountain View’s fire chief has banned crews from touching any damaged batteries "until it is verified that it is 100 percent de-energized." He’s also shared his memo with fire agencies across the region.

"We wanted to share that with the rest of the fire service. Not only with our firefighters in our department but to the rest of the Bay Area fire departments to know what the challenges that we faced and could potentially face if they encounter a similar situation," said Diaz.

The Mountain View Fire department is considering several changes including creating a specialized team to handle electric vehicle incidents. They also hope get a new device called a DC hot stick, currently in the testing phase, that would allow them to quickly and safely check if an electrical vehicle still has electricity flowing.

KTVU investigation contacted Tesla, who stressed the same statistics firefighters also include in their memo: electric vehicle fires are less likely to occur than fires in internal combustion vehicles. And that fires usually occur after a high-speed impact. According to the NFPA, “about 90 cars catch fire for every 1 billion miles driven in the United States."

Tesla also issued the following statement about the deadly Mountain View crash on its blog:

Tesla battery packs are designed so that in the rare circumstance a fire occurs, it spreads slowly so that occupants have plenty of time to get out of the car. According to witnesses, that appears to be what happened here as we understand there were no occupants still in the Model X by the time the fire could have presented a risk. Serious crashes like this can result in fire regardless of the type of car, and Tesla’s billions of miles of actual driving data shows that a gas car in the United States is five times more likely to experience a fire than a Tesla vehicle. KTVU, Montainside, CA