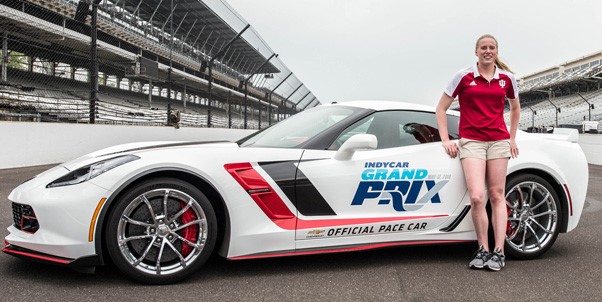 Olympic gold medal-winning swimmer Lilly King, who competes collegiately for Indiana University, will drive the Chevrolet Corvette Grand Sport Pace Car to lead the starting field to the green flag for the fifth annual INDYCAR Grand Prix on Saturday, May 12 at the Indianapolis Motor Speedway.

"I'm super-excited to be able to drive the Pace Car for the INDYCAR Grand Prix," King said. "As a homegrown Hoosier, there is nothing cooler than being able to drive at the Indianapolis Motor Speedway!"

King, a junior at IU, has enjoyed a dominant collegiate swimming career. She is a three-time reigning NCAA champion in the 100-meter and 200-meter breaststroke, has earned four All-America honors in each of her three years swimming for the powerful Hoosiers' program and is a three-time Big Ten Swimmer of the Year. She also earned Academic All-Big Ten honors in her sophomore and junior years.

"We are proud that Olympic gold medalist Lilly King will be pacing the INDYCAR Grand Prix in the Chevrolet Corvette Grand Sport," said Jim Campbell, vice president of Performance Vehicles and Motorsports. "As a world-class athlete with a passion for competition, it will be great to have Lilly experience what it's like to lead the field of the best IndyCar drivers from around the world across the famed Yard of Bricks."

King will lead the starting field of the Verizon IndyCar Series race on the 14-turn, 2.439-mile road course at IMS in a Corvette Grand Sport that features:

With the power of the legendary LT1 V8 engine and many of the aerodynamic components found on Z06, Grand Sport provides the perfect combination of power and handling to help make you feel closer to the road than you ever have before. The Corvette Grand Sport Pace Car can accelerate from 0-60 mph in 3.6 seconds, cover the quarter mile in 11.8 seconds and achieve 1.2 g cornering capability.

"Lilly King is one of the greatest athletes ever from the state of Indiana, and we're honored to welcome her to drive the Corvette Grand Sport Pace Car in the INDYCAR Grand Prix," said J. Douglas Boles, Indianapolis Motor Speedway president. "She knows all about speed in the pool, and we think she'll enjoy the incredible performance of the Corvette on track at the Racing Capital of the World."

Chevrolet has a storied history with the Indianapolis Motor Speedway. Chevrolet was founded in 1911, the year of the inaugural 500-Mile Race, and company cofounder Louis Chevrolet, along with brothers Arthur and Gaston, competed in early Indy 500 races. Arthur Chevrolet competed in the 1911 race, and Gaston Chevrolet won it in 1920.

The 2019 Corvette ZR1 is the official Pace Car for the 2018 Indianapolis 500 presented by PennGrade Motor Oil and will lead drivers to the green flag Sunday, May 27 for the 102nd Running of the legendary race.

Chevrolet is pursuing its seventh consecutive IndyCar manufacturer championship this year, building on a successful 2017 season that saw 10 wins out of 17 races.

Visit IMS.com to purchase tickets for the fifth annual INDYCAR Grand Prix on Saturday, May 12 and for more information on the complete Month or May schedule at IMS.