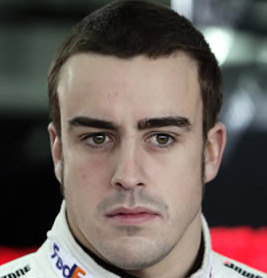 UPDATE #5 This rumor is upgraded to 'fact' with today's announcement.

Not sure which report to believe here. According to the British newspaper The Times, Fernando Alonso will become the highest-paid driver in the history of F1 if he moves back to Renault. The newspaper reports that Alonso will earn â‚¬100 million ($146M) over three years.

In a deal that is set to be signed by the Spaniard and announced by Renault imminently, Alonso, 26, will earn even more than Ferrari's reigning world champion Kimi Raikkonen in 2008, the newspaper said.

Brazilian rookie Nelson Piquet Jr will be his teammate, while Alonso's initially two-year contract – estimated at $50m per season – will assign him minimal sponsor commitments, contain an 'exit' clause, as well as clear number one status.

"Alonso will return to the team where he amassed his glory."

Alonso is expected to make his Renault test debut in late January at Valencia, in the new car.

12/07/07 (GMM) With Renault spared sanctions for possessing McLaren secrets, the path is now clear for Fernando Alonso to sign with the French team in 2008.

The Spaniard had delayed his final decision about next year until it was clear that he would not bear the burden of any penalties; or whether in fact Renault CEO Carlos Ghosn would pull the plug on the F1 program altogether in the face of a hefty fine.

But Spanish media, including the newspaper Diario AS, report that 26-year-old will certainly now sign a two-year contract to drive for Renault in 2008, after racing to back to back titles with the team in 2005 and 2006 before the ill-fated switch to McLaren.

Alonso's contract will include an exit clause in the event that the new collaboration "does not work" for unspecified reasons, AS added.

"The announcement is imminent," the newspaper predicted, speculating that next Monday could be the day.

12/06/07 As the door to the FIA court in Monaco closed last night, another opened to usher Fernando Alonso in from the cold and back into Formula One.

The two-times Formula One world champion was on the verge of being left out of the sport if Renault had been handed a tough punishment by the court investigating allegations of spying against the team.

Alonso had refused to commit his future to the team while the court judgment was pending, even though it is thought that Flavio Briatore, the Renault team principal, was prepared to offer as much as Â£20 million a year to secure the services of the driver dumped by McLaren after a fractious season.

With Renault in the legal clear, though, Alonso is thought to be ready to accept a three-year deal with a get-out clause if they are underperforming at the end of next season.

They may not be able to give him a car to chase the championship contenders, but at least he will be saved from the ignominy of taking a year’s sabbatical simply because he was unable to find an employer. TimesOnline

12/03/07 (GMM) The plans for 2008 of both Renault and Fernando Alonso are expected to be clear by no later than next Monday.

Although Red Bull, Honda and Toyota are understood to still be in the running to secure the services of the double world champion, the Spanish newspaper Diario AS mentioned December 10 as a day of clarity for Alonso, who is 26, and the French team led by his former boss and mentor Flavio Briatore.

This Thursday, December 6, Renault will appear before the World Motor Sport Council in Monaco facing serious charges of spying on McLaren.

It is believed that Alonso, who left Ron Dennis' Woking based team after a tumultuous 2007 season, delayed his decision about returning to Renault pending the outcome of the new FIA probe.

The sports daily Marca claims that while the Spaniard and his wife Raquel Rosario stayed with his family in Asturias last week, his advisors – supported by the law firm Garrigues-Walker, who are pushing for a one-year contract for their client – travelled to Austria for talks with Red Bull baron Dietrich Mateschitz.

The story follows speculation, denied by the Japanese team, that Alonso visited the Honda factory in Brackley (UK).