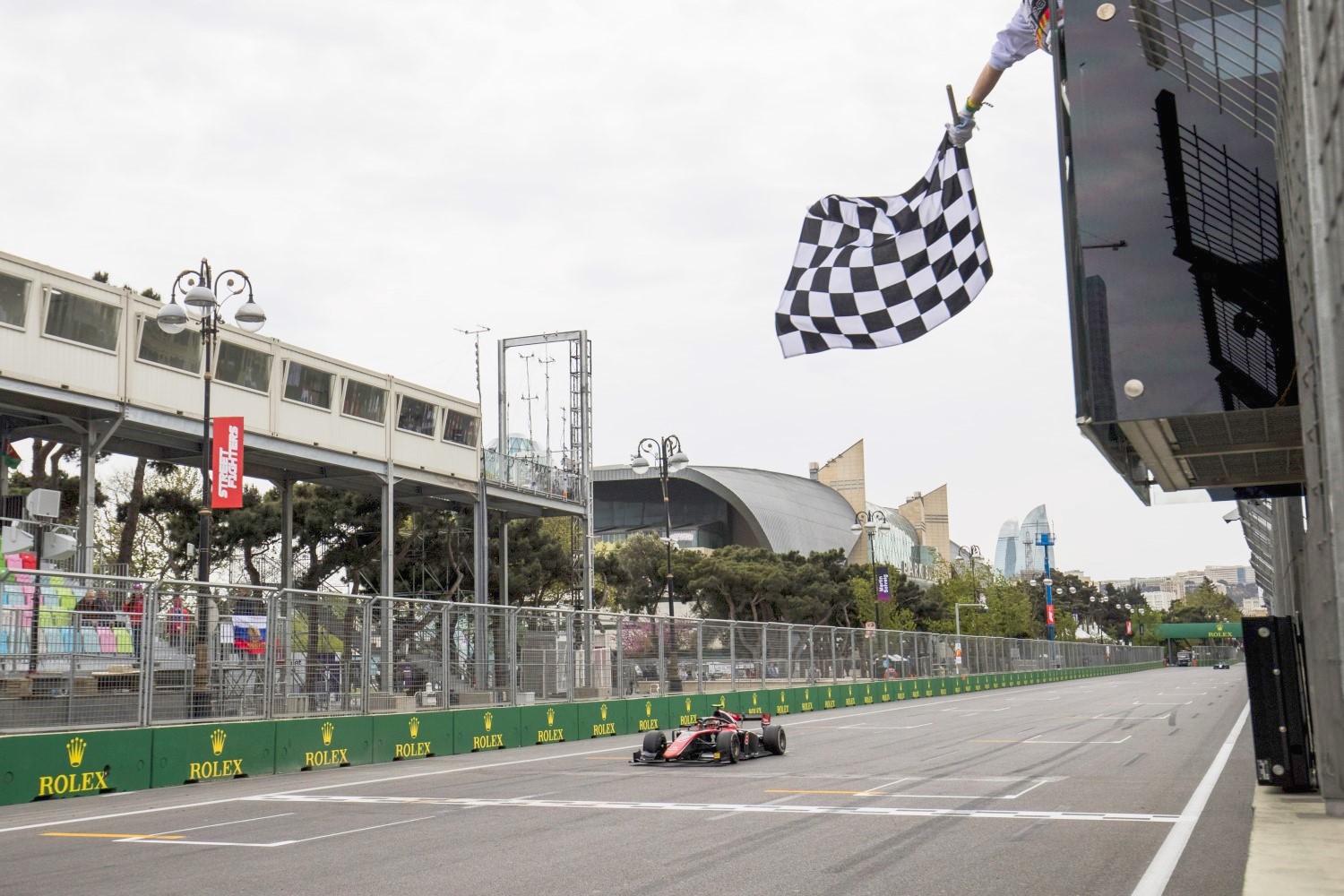 Strong winds tore around the Baku City Circuit as polesitter Roberto Merhi was slow off the line at the start of the race. Nicholas Latifi took advantage, taking the early lead of the race while Ralph Boschung retained second after a similarly tricky start to his MP Motorsport teammate. Sette Camara quickly surged ahead of the Swiss driver, and then subsequently passed Latifi on the second lap for first position.

Boschung dropped back behind the front pair and immediately found himself under heavy fire from British pair Lando Norris and a charging Russell. Norris forced his way through, blasting past at turn 3 on the fourth lap, but the trio’s battle continued as de Vries joined the back of the chasing pack. Boschung fell away, and Norris and Russell were able to chase after Latifi.

The DAMS driver provided a stern defense in his pursuit of retaining second, seeing off a challenge from Norris in the first corner on lap 8, and was engaged in a three-way battle with the Carlin driver and Russell on the main straight on the following tour of the circuit. Norris attempted to pass the Canadian driver on the outside of turn 1, but braked too late and had to take to the run-off, with Latifi and Russell making it through.

Russell cleared Latifi with DRS on the next lap, and immediately set about chasing down Sette Camara who held a four second lead. A lock-up from the Brazilian helped Russell close the gap, and a string of quick laps brought him even closer to his tail over the second half of the race.

With five laps remaining, Russell briefly wrestled the lead from Sette Camara’s grasp, but immediately had to relinquish it as the Carlin driver barreled back past on the following corner. Russell hit back, and wisely stayed close to the rear of his rival for a run with DRS. Although the Brazilian attempted to switch back into the first corner and reassume a tow, Russell had too much of an advantage to let the position go, building a gap which proved unassailable.

Battling in the final stages with Latifi for the last available podium placing, de Vries attempted a pass in the penultimate lap, but Latifi assumed the inside line for the opening two corners to block the Dutchman. De Vries kept going, and blasted past to clinch third ahead of turn 3, and resisting the subsequent advances of his DRS-assisted rivals to claim his first podium finish of the season.

Latifi remained ahead of Norris, as the Trident pair of Arjun Maini and Santino Ferrucci scored their first points of 2018 with sixth and seventh. Merhi claimed the final point, having been embroiled in a scrap with Boschung in the final laps of the race to finish eighth in both Baku races.

After the dust settled, Norris continues to lead the Drivers’ Championship with 53 points, just one point ahead of teammate Sette Camara while Baku Feature Race winner Alexander Albon (who stalled at the start of today’s race) occupies third in the championship with 41 points. Carlin hold a significant advantage in the Teams’ Championship, standing with 105 points to second-placed DAMS’ 59, while ART Grand Prix are in third thanks to Russell’s victory.

The next round will take place in Spain in two weeks’ time, where the battle for supremacy will continue at the Circuit de Barcelona-Catalunya from the 11-13 May.