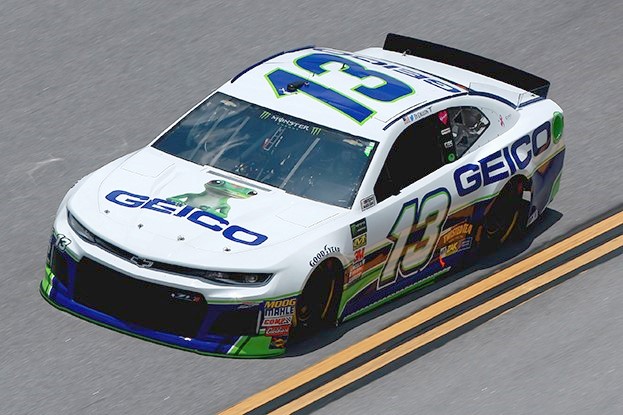 Dillon led the first session in the No. 13 GEICO Chevrolet with a fast lap of 202.959 mph on the 2.66-mile tri-oval. McMurray, driving the No. 1 DC Solar Chevrolet, led the second session, at 203.975; Dillon was second-fastest in the second session.

McMurray’s fast lap was followed a lap later by a dramatic backstretch incident in which he spun, was hit by Ryan Newman’s Chevrolet, and rolled several times before coming to a stop. Cars driven by Dillon and Daniel Suarez also were involved. No drivers were injured, but all four will have to use back-up cars and as a result will start the GEICO 500 at the rear of the field.

On Sunday, Stenhouse will try to become the fifth.

Stenhouse’s victory last year was his first in the Monster Energy NASCAR Cup Series. That is his Talladega highlight thus far and the biggest indication – but not the only one – of a consistent comfort level. In nine Talladega starts, Stenhouse had three top-five finishes and five top 10s while having completed 99 percent of the race laps run. It’s also worth noting that his only other Monster Energy Series victory came at the other massive tri-oval on the series schedule, Daytona International Speedway. (July 2017, Coke Zero Sugar 400.)

His GEICO 500 victory in 2017 is part of an overall recent Ford dominance at Talladega; Fords have won six of the last seven races here.

“I’d like to continue that streak of Ford being in Victory Lane and I’d really like to back up what we did here last year with qualifying on the pole and winning the race," Stenhouse said.

“We always feel very confident in our race cars when we come here. … I do think coming into Talladega with a thought process of ‘I really enjoy this place and I feel like I can win’ … it definitely helps the race go a little better."

On Friday, there were two practice sessions for the Sparks Energy 300. Cole Custer (No. 00 Haas Automation Ford) led the first session with a fast lap of 194.125 mph; the second session was led by Shane Lee (No. 3 Childress Vineyards Chevrolet), at 187.938.

Also Friday, it was announced that the ARCA Racing Series presented by Menards has been acquired by NASCAR. The series held its fourth race of the season on Friday afternoon at Talladega, the General Tire 200.

“It's fantastic that we're going to be working together going off into the future," said NASCAR Vice Chairman/Executive Vice President Jim France. “Both organizations have a great history, with great championships. We’ve shared a lot of teams and drivers over the years. That will continue in a major way."

The ARCA Racing Series will continue to operate under its current structure through the 2019 season.