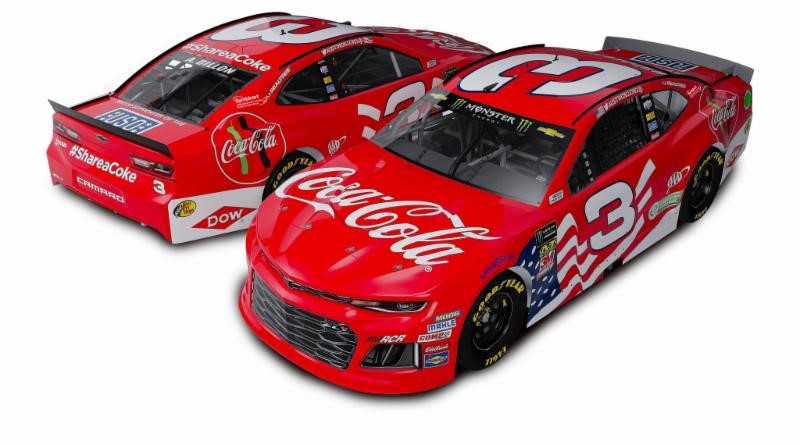 Coca-Cola, one of the world's iconic brands, will be featured as primary sponsor on the No. 3 Chevrolet Camaro ZL1 at Charlotte Motor Speedway during the 2018 Coca-Cola 600. Coca-Cola's longtime partnership with Richard Childress Racing (RCR) will continue its deep-rooted history over Memorial Day Weekend with defending race winner Austin Dillon carrying the Coca-Cola colors. Dillon recorded his first-career Cup Series victory last May at Charlotte Motor Speedway in the Coca-Cola 600, one of NASCAR's crown jewel races.

The red and white patriotic paint scheme was unveiled today at Fort Bragg military installation in front of U.S. servicemen and women prior to a lunch with several gold-star families.

"Coca-Cola has made NASCAR's Memorial Day Weekend a bucket-list experience for race fans," said Dillon, a member of the Coca-Cola Racing Family. "I'm thrilled to have Coca-Cola as our primary sponsor for the Coca-Cola 600 – one of NASCAR's flagship racing events. Coca-Cola has played a critical part in my NASCAR career and I look forward to continue representing the brand and defending my title as Coca-Cola 600 champion."

Coca-Cola's involvement with NASCAR dates back 50 years and its partnership with RCR began in 1998. Its comprehensive marketing approach has engaged millions of fans, customers and employees and has earned Coca-Cola recognition as being one of the most recognized brands in the sport. Dillon was introduced into the Coca-Cola Racing Family in 2014 when he became a full-time Cup Series driver. Coca-Cola last appeared as a full primary sponsor with RCR 20 years ago in the 1998 NASCAR Thunder Special Motegi in Motegi City, Japan. Dale Earnhardt Sr. drove the No. 3 Coca-Cola Chevrolet to an eighth-place finish in the 300-mile exhibition race.

Coca-Cola's continued loyal support of the U.S. Armed Forces was on display Thursday at Fort Bragg when several service members helped unveil the No. 3 Chevy. Coca-Cola recognizes service members at the race track through its successful six-week platform, "NASCAR Salutes Refreshed by Coca-Cola," which runs from May to June and aims to recognize uniformed men and women.

"As a founding partner of the USO, The Coca-Cola Company has a longstanding history of supporting the U.S. military, veterans and their families," said Ben Reiling, Director, Motorsports, Coca-Cola North America. "We are thrilled to continue to support U.S. service members with the NASCAR Salutes program and to continue our partnership with defending Coca-Cola 600 champion Austin Dillon."

Last May, Dillon raced his way to victory during the Coca-Cola 600, recording his first-career Cup Series victory and putting the legendary No. 3 car in Victory Lane for the first time in 17 years. Dillon is a two-time NASCAR champion and won the 2018 Daytona 500 earlier this season.