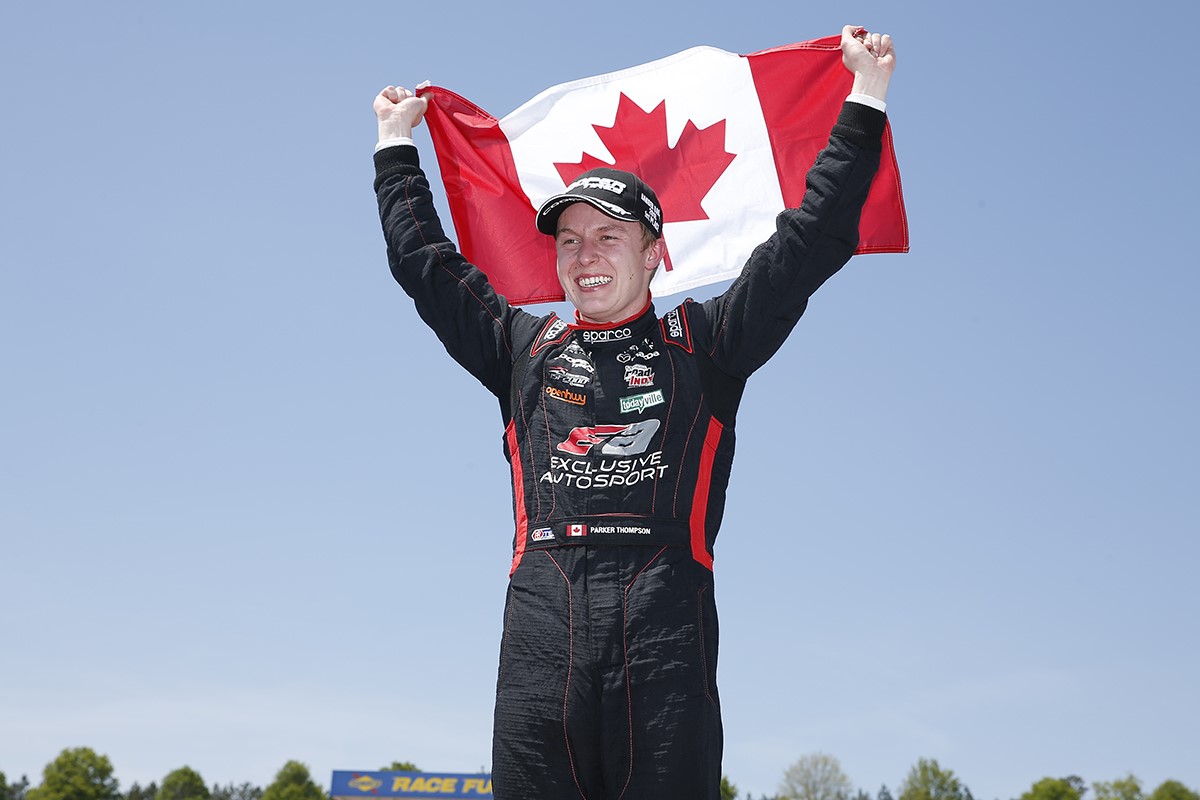 BIRMINGHAM, Ala. – Parker Thompson displayed peerless form this afternoon in the first of two races that will comprise this weekend’s Pro Mazda Grand Prix of Alabama Presented by Cooper Tires at Barber Motorsports Park. After annihilating the old Pro Mazda Championship Presented by Cooper Tires track record during qualifying yesterday afternoon, the 20-year-old from Red Deer, Alb., Canada, continued that form into the race as he led from start to finish for the Exclusive Autosport team. The victory was Thompson’s first since stepping up one rung on the Mazda Road to Indy from the Cooper Tires USF2000 Championship Powered by Mazda.

Thompson utilized the extra power and grip of his new Tatuus-Mazda PM-18 to take pole position with a lap of 1:16.8946, an average speed of 107.680 mph. The new benchmark time slashed almost 3.5 seconds from the old track record of 1:20.249 set in 2014 by current Verizon IndyCar Series driver Spencer Pigot.

Under a cloudless blue sky in rural Alabama, Thompson took off immediately into the lead from Scott, who had qualified alongside on the front row of the grid. Malukas tucked into third, although fellow second row starter Carlos Cunha (Juncos Racing), from Brazil, wasn’t quite so fortunate as he lost several positions on the opening lap.

There was a brief yellow flag interruption to remove some debris from the front straightaway, after which Thompson once again took off at the front of the field. Scott remained in his wheel tracks for a short while before Thompson began to assert his superiority and edge clear. He eventually took the checkered flag a comfortable 5.2269 seconds clear of Scott.

Malukas couldn’t quite match the leaders’ pace and instead came under increasing pressure from both Andres Gutierrez (Team Pelfrey), from Monterrey, Mexico, and championship leader Rinus VeeKay (Juncos Racing).

The teenager from Hoofddorp in the Netherlands had to be content with fifth place after a somewhat processional race, although he maintained a three-point edge, 76-73, over Thompson heading into tomorrow’s fourth round of the championship.

Thompson’s joy was compounded after earlier in the day claiming pole position for tomorrow’s race during a separate qualifying session. The green flag for Round Four of the Pro Mazda Championship Presented by Cooper Tires is slated for 9:50 a.m. tomorrow.

Coverage can be found on a series of platforms including Road to Indy TV, the Road to Indy TV App and dedicated broadcast channels on demand via Apple TV, Amazon Fire and Roku and, most recently, the Xbox One Official App as well as live streaming and live timing on promazda.com and racecontrol.indycar.com.

Parker Thompson (#90 Exclusive Autosport Tatuus-Mazda PM-18): “This is huge for us, being Canadian and from Saskatchewan. With the tragedy that happened in Humboldt [involving a Canadian ice hockey team], in our home province, to come here and dedicate this win to them is so special, especially when I look at the emotions from my team owner. Trust me when I say that I felt as though I had 16 angels riding on board with me. There’s something on this team today that wasn’t there in St. Pete. But starting on the pole is key here, but even more so when you have the kind of car I had today. It was on rails. The team told me to slow down, but I was going as slow as I could. It was a really good drive for me today and my hat is off to the entire team."

Harrison Scott (#10 epicura/Masterpack Innovative Printing-RP Motorsport Racing Tatuus-Mazda PM-18): “Being on pole is the best place to be for many reasons – you have the inside, but you also decide when to go and you have that initial jump. I was pretty happy to slot into second at the start and put a bit of pressure on him over the first few corners. For myself and the team, to get our first podium here in America, and on the Mazda Road to Indy, in only our third race is a great achievement. We just need to carry on that momentum and keep getting better and better."

David Malukas (#79 HMD Trucking-BN Racing Tatuus-Mazda PM-18): “This is my first time racing here, and we didn’t do long stints in testing, so it was a long race. We set up the car so that we would not have a lot of understeer so we could stay with Parker and Harrison, but it ended up that we didn’t have the pace. Once I was on my own, I had lots of oversteer so it was a race spent looking in my mirrors. But because it’s so difficult to pass here, I was able to keep Andres behind me, even though he put a lot of pressure on me."