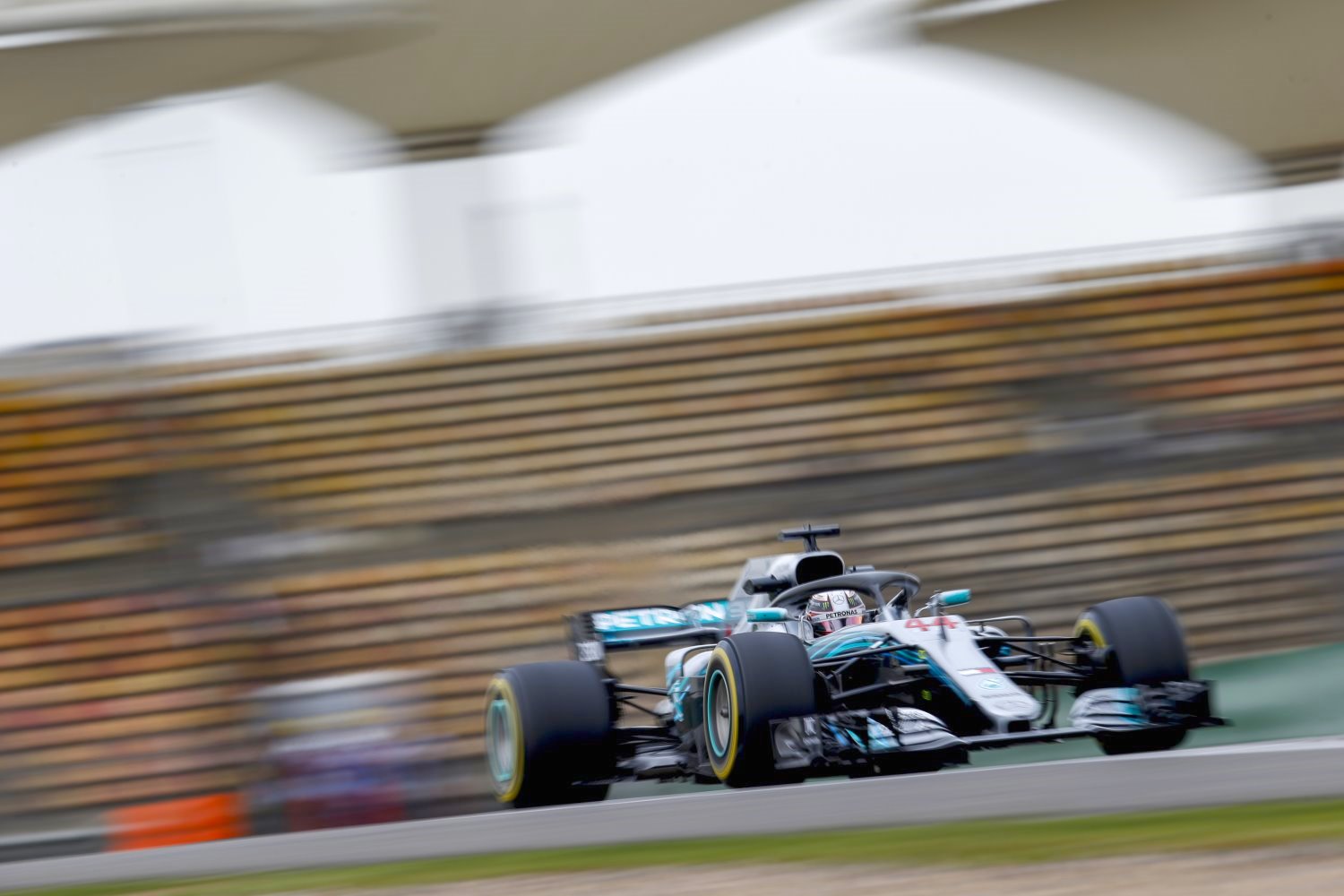 There is not much separating Mercedes and Ferrari after two practice session in Shanghai for the Chinese GP. Lewis Hamilton (1m33.48s) barely outpaced Kimi Raikkonen to lead the 2nd practice session by just 0.007s.

I other words it's too hard to predict who will be on pole in Saturday's qualifying.

Max Verstappen rounded out the top-5 for Red Bull some 3/10ths behind Hamilton.

Light rain fell on the track during the final 15 minutes slowing the times.

As in FP1, grip was at a premium and Hamilton and Raikkonen were among those to run off track as they explored the limits. And there were full-on spins for Williams’ Lance Stroll and Haas’s Romain Grosjean.

The heavens opened in the final ten minutes, effectively ending the session, though several drivers – Force India’s Sergio Perez and Esteban Ocon, Toro Rosso’s Pierre Gasly and Brendon Hartley, Sauber’s Marcus Ericsson and Alonso – did head back out on intermediate tires to get a taste of the damp conditions.

The only man to see his session end early was Stoffel Vandoorne, who had to pull his McLaren over with a suspected loose right-rear wheel after a pit stop. Stewards are looking at whether his car was released in an unsafe state.

So after fears following FP1 that Mercedes might have a clear edge here, FP2 proved quite the opposite, with the world champions and Ferrari all but inseparable, both in terms of long-run pace and single-lap speed.

In the latest in a number of botched tire changes in recent race weekends, McLaren has been fined â‚¬5,000 for releasing Stoffel Vandoorne's car in an unsafe condition following a practice pit stop in China.

During Friday's second practice session at the Chinese Grand Prix, Vandoorne's car was released without all four wheels securely attached, and after a stewards' investigation the team was hit with a financial penalty.

"The stewards reviewed the video and audio of the pit stop of Car 2 at 15:14 and heard from the team representative," a statement said. "The stewards determined that the car was released in an unsafe condition in breach of Art. 28.13(b) as the wheel was not properly attached to the car when released.

"The driver stopped the car in a safe manner as soon as the above became apparent to him. Consistent with previous decisions of a similar nature, the stewards decided that the grid place penalty mentioned in the above Article would not be applied as the driver took all appropriate actions at the first available opportunity. Accordingly, the stewards fined the team â‚¬5,000."

Lewis Hamilton
When I got to Shanghai the weather was really good, but it's gone downhill – now we got the rain and it's cold. But it has been a good day, we got through all the laps that we needed and got some good feedback about the car. All the tyros here are quite similar in pace, so there's not a big difference between them even though we have the double step between the Soft and the UltraSoft. The balance of the car is good but we have some fine-tuning to do on it tonight. Ferrari were quick and Red Bull looked really fast on the long run. It's good to see all the times so close, but it means that we really need to bring our A game. We need everyone in the team to be on it throughout the weekend because it is a joint effort.

Valtteri Bottas
It's good that the rain didn't come until the end of the session because the race is expected to be dry. The track improved a lot over the course of the day, even during the sessions. Lap after lap you could just feel more and more grip but that's quite usual for this track. We're expecting tomorrow morning to be a little bit trickier after the rain, and hopefully the conditions will improve for qualifying. We had some issues with the balance in the morning; the car was quick, but it wasn't easy to drive. We changed the set-up for FP2 and saw the lap times improve; hopefully we can make another step forward for tomorrow.. Overall, we got some good running and plenty of information, so I'm feeling all set for tomorrow. It looks like it will be extremely close again with Ferrari, both in qualifying tomorrow and the race on Sunday.

Andrew Shovlin
We've had a fairly normal Friday programme here, a few test items on the cars for the early running but mainly we have been focussed on understanding the car balance and the tire behaviour for qualifying and the race. We only tried the Soft tire during FP1 but the initial feedback from the drivers was quite encouraging and the car seemed to be working well. Shanghai is never an easy track to balance because there are so many different types . All the tires here are quite similar in pace, so there's not a. Free practice two saw us running all three tyros, both using UltraSoft but splitting the harder tyros so that Valtteri could focus on the Medium and Lewis on the Soft. We had concerns over the UltraSoft coming into this event but it was surprisingly consistent over the long runs and still going strong when we boxed both cars having seen the rain approaching on the radar. The Soft and Medium runs were cut short by the rain when it finally arrived although we managed to get a feel for the grip and balance and it seems that most of the other teams were also unable to complete their plans. The conditions are very cool today, similar to winter testing, and that does change the way the tyros behave. We are expecting more mixed weather tomorrow and our normal qualifying preparation could be affected by a bit of rain in free practice three. However, for Sunday the current forecasts show the sun coming out and we should get a much hotter track. Some of the work tonight needs to focus on that change of temperature for the race, but even for the cool conditions we anticipate tomorrow, we have work to do on the balance to fine tune a few corners. It's clear that ourselves, Red Bull and Ferrari are closely matched on pace and, as always, they will be improving their cars overnight so we will be working with our usual diligence to try and find every last bit of performance.

MAX VERSTAPPEN
“We spent a bit of time during the first session today working on the setup of the car in order to understand it better. By the end of the day the pace was looking good and I think we can be happy with the car’s performance, it’s always good to finish a day’s running with no major problems and we don’t look too far off. We just managed to fit in a longer stint before the rain came towards the end of the second session so we didn’t feel the need to stay out. The long runs were once again very positive and I felt pretty comfortable. A little bit of fine tuning on the short runs to get the balance better and we should be alright. This track is good for overtaking anyway so I think we can have a good race judging by our pace."

DANIEL RICCIARDO
“Half of the morning and half of the afternoon were good. Generally with the harder compounds I was more comfortable, but once we put the ultrasoft on we didn’t have as much speed so we need to find a bit of time there and understand where we are losing. I obviously know what doesn’t feel right in the car, but now we need to find the answers and change that for tomorrow. The long runs were much better and I’m confident we can find the speed. Overall, we aren’t looking too bad and I hope we can be in the fight with Ferrari and Mercedes."