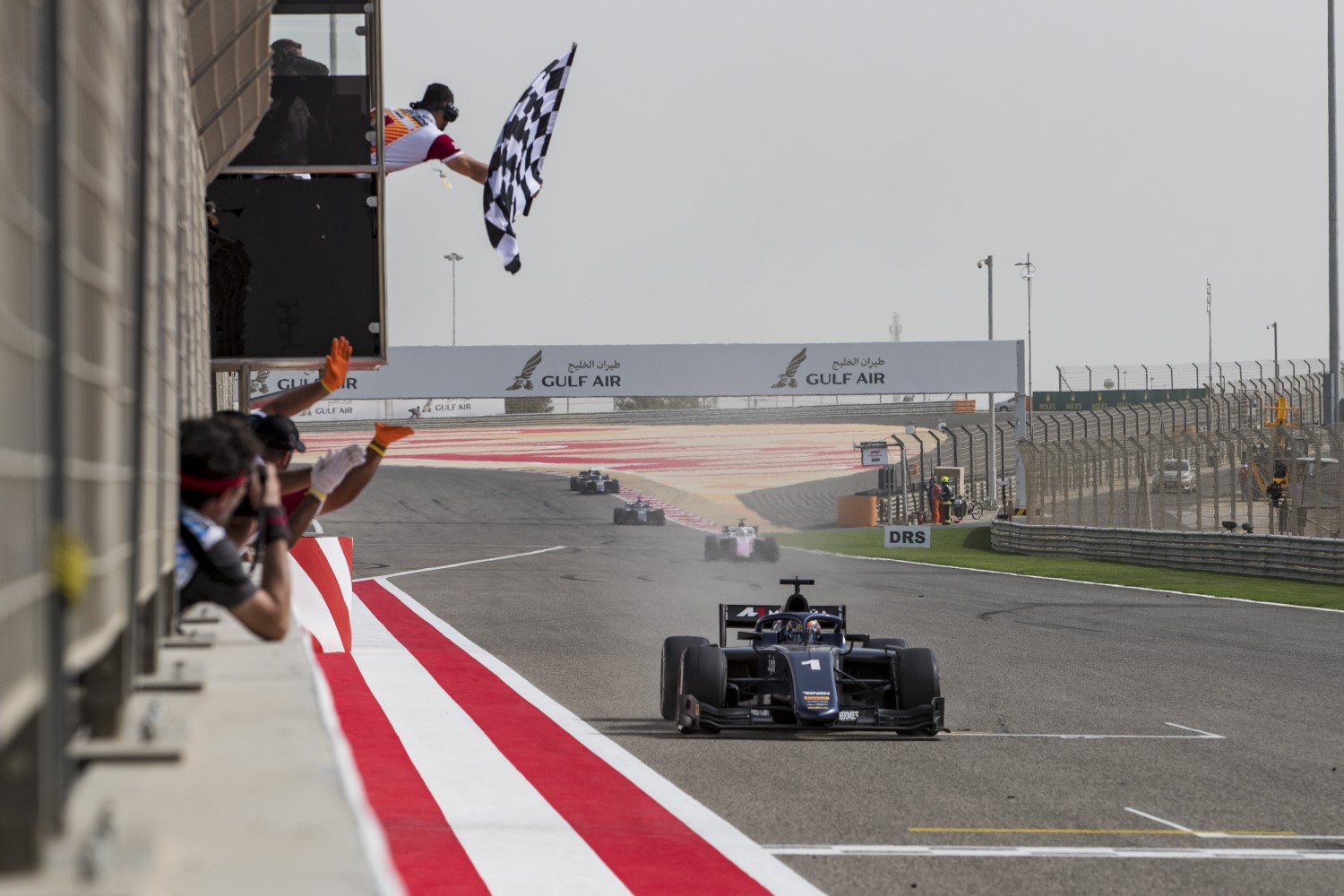 Artem Markelov produced a measured drive to grab victory in the 2018 FIA Formula 2 Championship Sprint Race at Sakhir, Bahrain, the RUSSIAN TIME driver managing his tires effectively to stand aloft on the winner’s step of the podium ahead of BWT Arden’s Maximilian Gunther and Sergio Sette Camara of Carlin.

In sweltering conditions, the majority of the teams gravitated towards once again opening with the medium compound tires – Roberto Merhi bucking the trend with a set of softs. Starting alongside Gunther on the front row, Sean Gelael stalled on the formation lap, leaving an open portion of track for the cars behind to take advantage of. Once the race got underway, Santino Ferrucci and both ART Grand Prix drivers Jack Aitken and George Russell also stalled, giving Nyck de Vries the opportunity to jump Gunther into the first corner and into the lead.

Markelov also made a good start to avoid the stationary car of Russell, leaping up into third from sixth on the grid, opening the race ahead as the Carlin pair of Sergio Sette Camara and Lando Norris completed the early top five. De Vries set the early pace, building a break over Gunther and looking to atone for a difficult feature race. Markelov then cleared the German rookie, eclipsing him at Turn 4 on the fourth lap to attempt a charge on De Vries.

The PREMA driver seemed to have the advantage, opening the gap over Markelov to almost four seconds, but by lap 10 De Vries was struggling on his tires and was called in to pit for a set of soft tires. This thrust Markelov into the lead, as De Vries rejoined the pack in 13th place with plenty of ground to make up.

Managing his tires, Markelov held Gunther at arm’s length, leaving the latter driver to voice his concerns about his own rubber. His subsequent series of lock-ups let both Carlins into the hunt for second, Norris having recovered from a brief mechanical hiccup to slot back in behind Sette Camara, allowing Markelov to extend his advantage as the trio behind battled it out. Sette Camara was seeking to take advantage, especially as De Vries’ recovery through the field had brought him into fifth place – just down the road from the leading pack.

Markelov was continuing to manage the pace, losing a bit of time to the triumvirate of chasing cars in the closing stages of the race. Gunther, having come under fire from the advances of Sette Camara, had dropped the Carlin pair, but was running out of time to catch the leader. Having produced an immaculate recovery drive in the first race, Markelov took the checkered flag to secure his first victory of the year and ignite his championship aspirations.

Gunther was a further 2.1s behind to claim his first podium position of the year, while Sette Camara stood his ground to absorb a late challenge from Norris for third, holding station as the British driver attempted to round his teammate around the outside of Turn 4. De Vries was unable to get any closer, his pace stagnating on reaching fifth place, as Luca Ghiotto claimed sixth following an excellent start from 12th on the grid, grabbing his first points of the year. Ralph Boschung and Nirei Fukuzumi completed the top eight.

Norris leads the standings after the first round, taking 39 points over the weekend to head Markelov on 30. Sette Camara is third, a further two points behind, as Gunther’s podium put him into the top four. The field will regroup for the second round at Baku, Azerbaijan, which takes place on the 27-29 April.