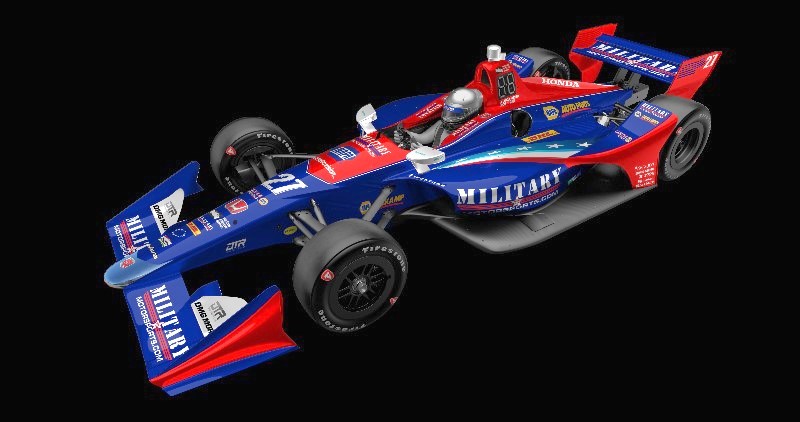 Red, white and blue will paint patriotism on the No. 27 car of Alexander Rossi for the upcoming Phoenix Grand Prix at ISM Raceway as MilitaryToMotorsports.com returns as primary sponsor for the 250-lap race. Military to Motorsports will use the first oval race of the Verizon IndyCar Series season to showcase the program, seeking to attract military Veterans toward joining the fast-paced world of motorsports.

“This is such an exciting announcement and something that I am so proud to be a part of," said Rossi. “I bleed red, white and blue and it honors me to be a spokesperson for an organization that is determined to help those who have fought for our freedom. This is wonderful timing with the rebirth of the Verizon IndyCar series – I look forward to trying to get the Military to Motorsports car to victory lane."

MilitaryToMotorsports.com launched in August 2017 to place military Veterans into open positions within the motorsport industry through careers with Andretti Autosport and the team’s extended network of partners. The unique initiative first appeared on Rossi’s racing machine at Pocono last year where the American driver scored a podium finish while bringing awareness to the program and kick-starting the brand.

"I am very excited about the Phoenix Grand Prix – not only for the team, but also for our Veterans," said retired U.S. Navy Veteran and co-founder of the Military to Motorsports program, David Tilton.

“The race weekend will be a chance for Military to Motorsports to showcase our effort in helping these true heroes who have put their lives on the line for us, so that we can enjoy the sport of racing.

Tilton continued, “This year, we have expanded our Military to Motorsports initiative to Andretti Autosport’s partners, allowing more opportunities for our military Veterans in various locations nationwide. The Phoenix race is a great opportunity to create more awareness of our program; generating a positive impact on our heroes and their families, as we support them with their transition from their military lives to the private sector."

Rossi will join all-American teammates Zach Veach (No. 26 Group One Thousand One Honda), Ryan Hunter-Reay (No. 28 DHL Honda) and Marco Andretti (No. 98 Oberto Circle K / Curb Honda) as they battle for the win at the first oval race of the season. The Phoenix Grand Prix will go green under the lights of ISM Raceway on April 7 at 9:40 p.m. ET.