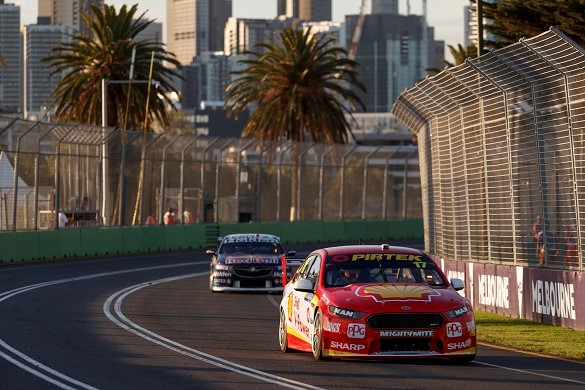 Scott McLaughlin found his mojo in Melbourne with an historic win the first Championship points race at the Coates Hire Melbourne 400 over arch rival Jamie Whincup.

The pair had their own battle in an intriguing first-up race of four at Albert Park this weekend to claim bragging rights as the first points winner at the event.

The four that started on the front row finished in the same pack with Fabian Coulthard and Shane van Gisbergen swapping positions from the start.

Whincup got McLaughlin in the pits initially before the young Kiwi repaid him on lap 17 of 25.

Then, as they did throughout most of last year until the last lap of the last race, Whincup and McLaughlin went head to head out in front for the last 10 laps, clearing out from the rest of the field.

Gaining speed McLaughlin made a move on lap 17 with a three-corner sequence where they went door to door, seemingly without rubbing any paint. McLaughlin prevailed. Coulthard, in third, was also closing the gap at rapid pace but ran out of laps in the end.

“I’m stoked, it was an awesome battle," said McLaughlin.

“Me and Jamie, we always battle hard and fair, it was so much fun. The guys did an awesome job, gave me a great car. I’m pumped.

“It was a lot of fun to get after it, I’m stoked for the team, one-three, we’ll hopefully go for a couple of one-twos over the weekend."

Whincup flew off the start line from the second row of the grid but was immediately shut out by the twin Shell V-Power Falcons. He went the wide line and got past Coulthard at turn one and almost got Whincup at the next.

The mid-pack battle was ferocious in the first race for Championship points at Albert Park between David Reynolds, Nick Percat, Scott Pye and Garth Tander. The same was happening at the back with Simona de Silvestro and rookies Jack le Broq and Richie Stanaway trading blows.

Autobarn Racing’s Craig Lowndes was the first to stop after starting in 17th on the grid to break up him away from the skirmishes and into some clear air. De Silvestro followed.

The leaders stayed out with Whincup the first for fuel and tires. McLaughlin went in a lap later and came out behind Whincup, with a one second difference in stop times between the two.

The second and third races of the Coates Hire Melbourne 400 will be run tomorrow, the first sprint race at 12.40pm and another pit stop longer race at 6.30pm.

MCLAUGHLIN QUOTE: “It’s a monkey off the back to get the first win of the year under the belt. That podium after the race was so cool, I’ve never had the national anthem played on the podium before so that was a great feeling. Looking forward to doing it again tomorrow."