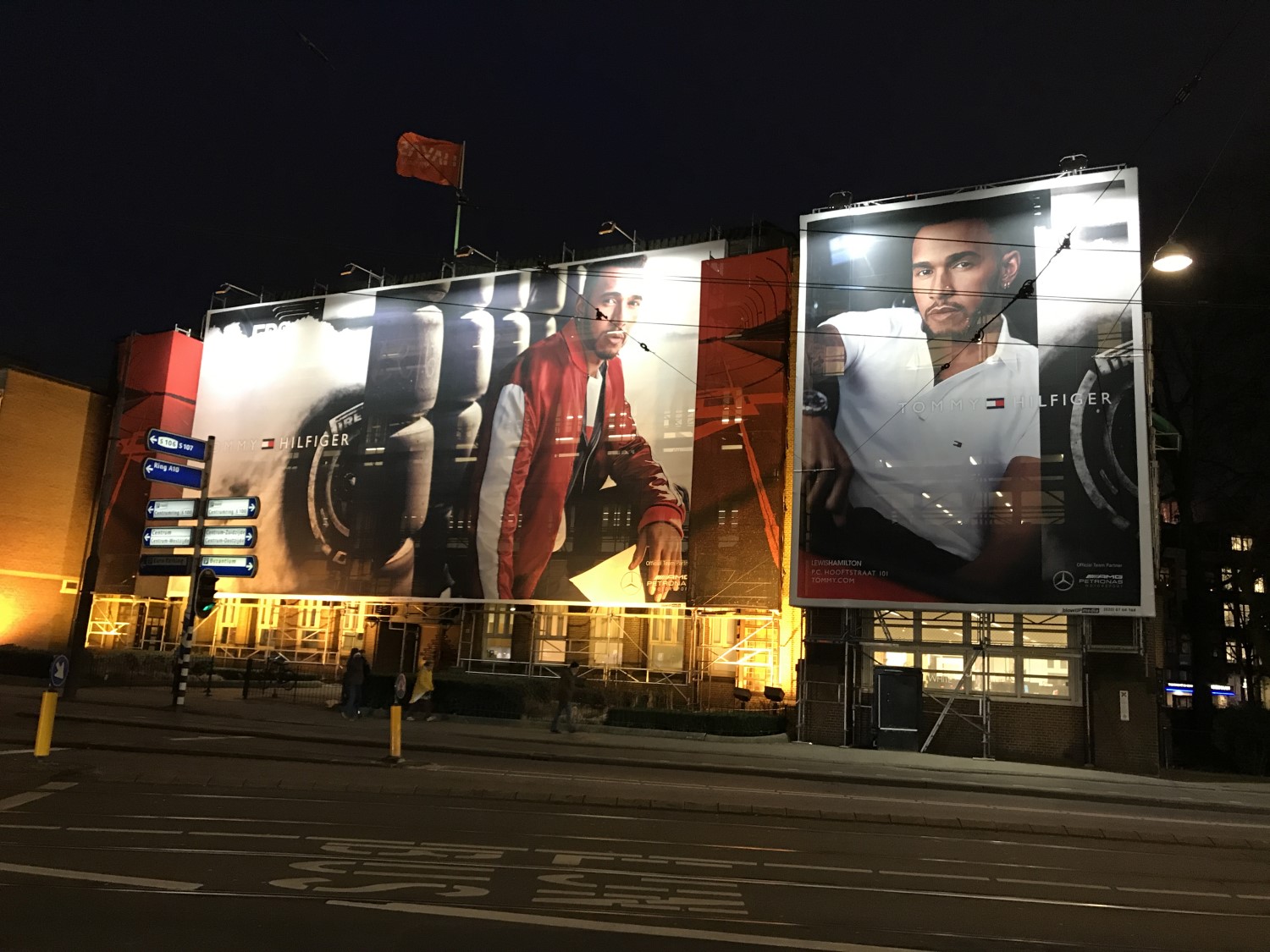 UPDATE Some Hilfiger posters of Hamilton in Amsterdam.

03/15/18 Tommy Hilfiger, which is owned by PVH Corp, announces that British Formula One racing driver and four-time Formula One World Champion Lewis Hamilton will appear as the new global brand ambassador for TOMMY HILFIGER men’s, including HILFIGER COLLECTION, TOMMY HILFIGER TAILORED and TOMMY HILFIGER Menswear, Underwear and Swimwear, starting Spring 2018. The partnership reflects Tommy Hilfiger’s strategic commitment to build on its strong menswear heritage and further drive the global growth of its men’s business, bringing the next generation of fans to the brand.

“I have always admired Lewis’ incredible endurance during the race, as well as his unique style off the track, which speak to the new generation of Tommy Guys," said Tommy Hilfiger. “He has built his incredible career as a racing driver with passion, dedication and extremely hard work – values that I embraced when founding my brand. We have a history with Formula One, and this partnership builds on our heritage of collaborations within the world of motor sport."

Lewis Hamilton’s career achievements have put him in an elite group of global athletes, and he is regarded as one of the greatest Formula One drivers in history. He holds the record for all-time most pole positions, career points and most wins at different circuits. He has won at least one Grand Prix in every season he has competed in. Lewis Hamilton connects with more than 17 million fans through the incredible reach of his social media channels, offering his audience a unique behind-the-scenes glimpse into the Formula One racing world and his personal life.

“I believe in the power of fashion and innovation to celebrate individuality and break conventions, like Tommy Hilfiger," said Lewis Hamilton. “Tommy’s designs inspire me to be bold in every outfit that I put together outside of the racing track, expressing my creativity and eclectic style with confidence. His groundbreaking TOMMYNOW experiential events are one-of-a-kind, and I’m very excited to partner with such visionary brand."

The integrated men’s campaign was photographed by Mikael Jansson at the Pocono Raceway, also known as the Tricky Triangle, in Pennsylvania, U.S. and will break globally in Spring 2018. It features exclusive video teasers, print, online, and out of home media placements, and will be supported by unique consumer activations that continue to bring the brand’s unique perspective on pop culture to life around the world. The TOMMY HILFIGER men’s campaign will run alongside the brand’s dedicated women’s advertising, featuring global womenswear brand ambassador and international supermodel Gigi Hadid. The campaigns fused when Lewis Hamilton and Gigi Hadid took the wheel of a Mercedes-AMG GT S car at the Pocono Raceway, and recorded their first drive together around the track in a dash cam shot video, directed by Matt Baron, that shows their reactions to the other’s driving skills.

The Spring 2018 TOMMY HILFIGER men’s offering celebrates Tommy Hilfiger’s love of motor sports, where speed and immediacy fuse with a touch of vintage nostalgia. The collection, which premiered at TOMMYNOW “DRIVE" during Milan Fashion Week on February 25th, gives nod to the Formula One racing pit crew, with heritage work wear and a strong focus on denim. Street styles are born from the iconic shapes, bold colors and streamlined graphics of speed racers. Looking at the traditional American automobile culture, clothing is reinvented for a collection that fulfills the needs of today’s fast-paced lifestyle.

The brand heritage of TOMMY HILFIGER is closely linked with pop culture and sports icons. In the ‘90s, Hilfiger was one of the first designers to blend fashion and celebrity, and he became a pioneer in the industry by dressing young artists such as Aaliyah, Mark Ronson and Usher; and featuring musicians such David Bowie and Beyoncé in his advertising campaigns. In recent years, Tommy Hilfigerhas established inspiring partnerships with international tennis champion Rafael Nadal, international supermodel Gigi Hadid, and award-winning musician/producer duo The Chainsmokers, reflecting the brand’s commitment to broaden its reach and connect with the next generation of consumers. Tommy Hilfiger also has a history with Formula One, most recently announcing a multi-year strategic partnership as the Official Apparel Partner for the four-time World Champions Mercedes-AMG Petronas Motorsport.The brand previously sponsored the Lotus Formula One team from 1991 to 1994, and was the first non-automotive brand to sponsor Ferrari’s Formula One team, including uniforms created by the designer himself, in 1998.