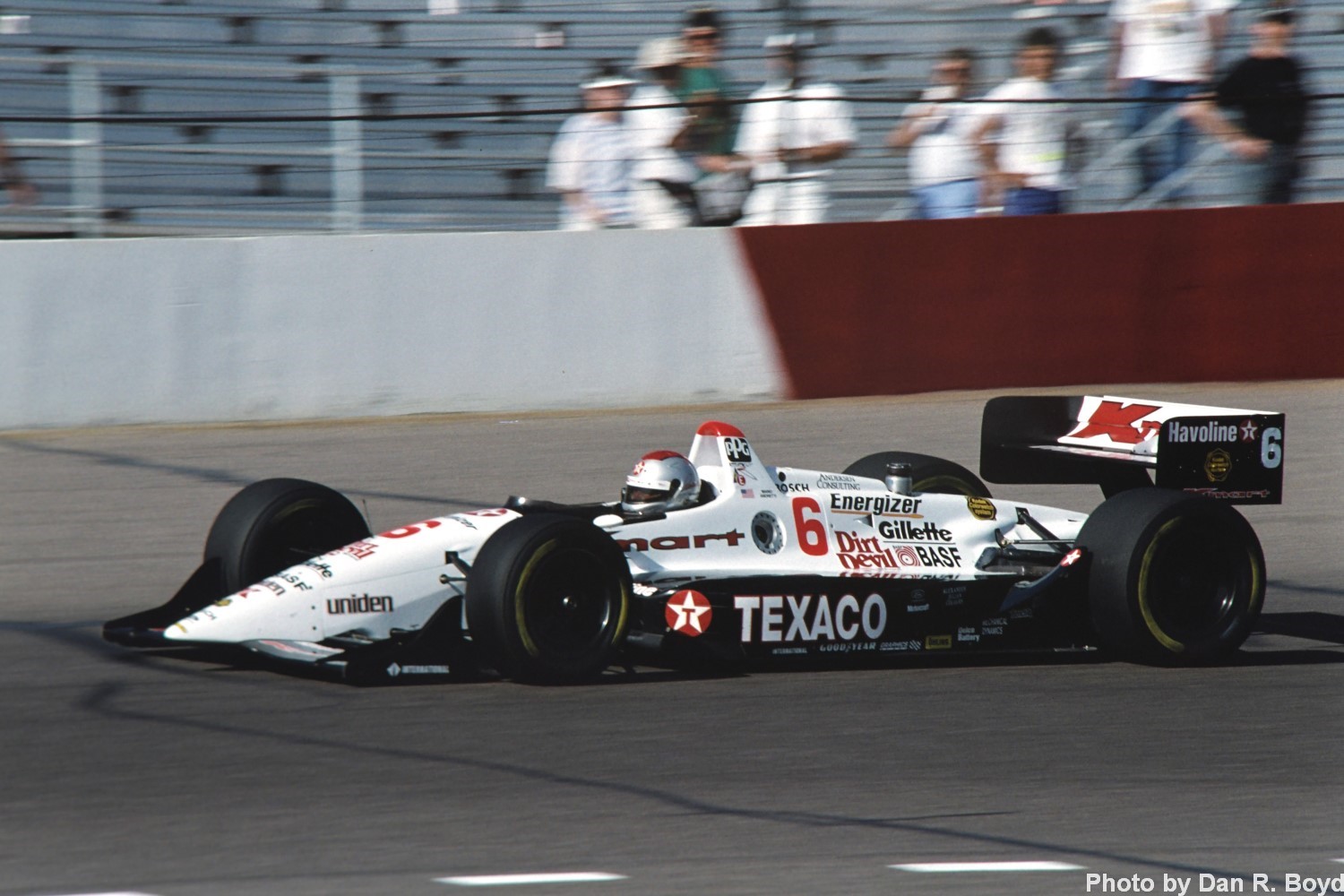 UPDATE Added photos to the right and below of Mario Andretti at Phoenix and the cars that will be on display.

03/13/18 As part of the 25th anniversary celebration of the final win of Mario Andretti’s illustrious career, ISM Raceway will showcase four iconic race cars that were victorious in Phoenix over a special reunion weekend for the Verizon IndyCar Series Phoenix Grand Prix on April 6-7, 2018. The four race cars will honor the anniversary of Andretti’s checkered flag in the Phoenix Grand Prix at ISM Raceway on April 4, 1993.

In the lead-up to the 25th anniversary celebration, ISM Raceway, the Verizon IndyCar series and Classic Racing Times will work together to honor the cars and drivers from the 1993 race. That star-studded field consisted of some of the most successful open-wheel drivers of that era, including Al Unser Jr., Emerson Fittipaldi, Bobby Rahal, Arie Luyendyk, Paul Tracy, Robby Gordon, Eddie Cheever Jr., Scott Pruett and Jimmy Vassar.

The four iconic Andretti cars to be showcased over the special reunion weekend for the Verizon IndyCar Series Phoenix Grand Prix are from 1966, 1967, 1988, and 1993.

On November 20, 1966, Andretti had already locked up the 1966 USAC National Championship when the teams arrived at Phoenix for the season finale in mid-November. He started from the pole with his 1965 normally-aspirated Ford V8-powered Dean Van Lines Brawner Hawk and led 153 of the 200 laps, bowing only to Parnelli Jones between laps 86 and 132. Andretti won by a complete lap over Al Unser and two laps over Jim McElreath, who finished third. It was his eighth USAC Championship victory of the year.

Andretti drove to a second consecutive victory in the Phoenix 200 on November 19, 1967. His Ford V8-powered Dean Van Lines-sponsored Brawner Hawk had been built for the 1965 season by chief mechanic Clint Brawner. The design of the race car was based on a 1964 Brabham that was still winning races. Andretti just missed winning the pole and started next to Bobby Unser, who proceeded to lead the first 180 laps until a slipping clutch slowed him down. Andretti led the final 20 laps to win, averaging 109.872 mph. Al Unser, who was runner-up to Andretti in 1966, finished second again, with brother Bobby salvaging third.

As a 48-year-old former world champion, Andretti was the benefactor of Rick Mears’ bad luck. Driving his Newman/Haas Lola-Chevrolet to his 50th career Indy car win, he ended his 20-year drought at the track in front of a record Phoenix crowd on April 10, 1988. After starting third with a Chevrolet Indy V-8 engine which already had 180 miles on it, Andretti took over the lead on lap 67. By the 75th lap only four challengers had made the same number of trips around the 1-mile oval. Averaging a speed of 121.992 mph for the 200 miles, he finished more than a half of a lap ahead of Roberto Guerrero and Andretti’s son, Michael.

On April 4, 1993, Andretti became the oldest driver in CART history to win a race at 53 years, 34 days old. It was his 52nd IndyCar victory. With this win over Raul Boesel, Andretti claimed a checkered flag in professional races in four consecutive decades. In the Kmart/Texaco Havoline Lola-Ford Cosworth XB, he started second and led the first 10 laps as well as the last 29 laps averaging a speed of 123.487 mph. After spending much of the race chasing Paul Tracy, Andretti cruised to a one-lap victory in the Valvoline 200. This victory in the desert ended up being the all-time great’s last IndyCar win.