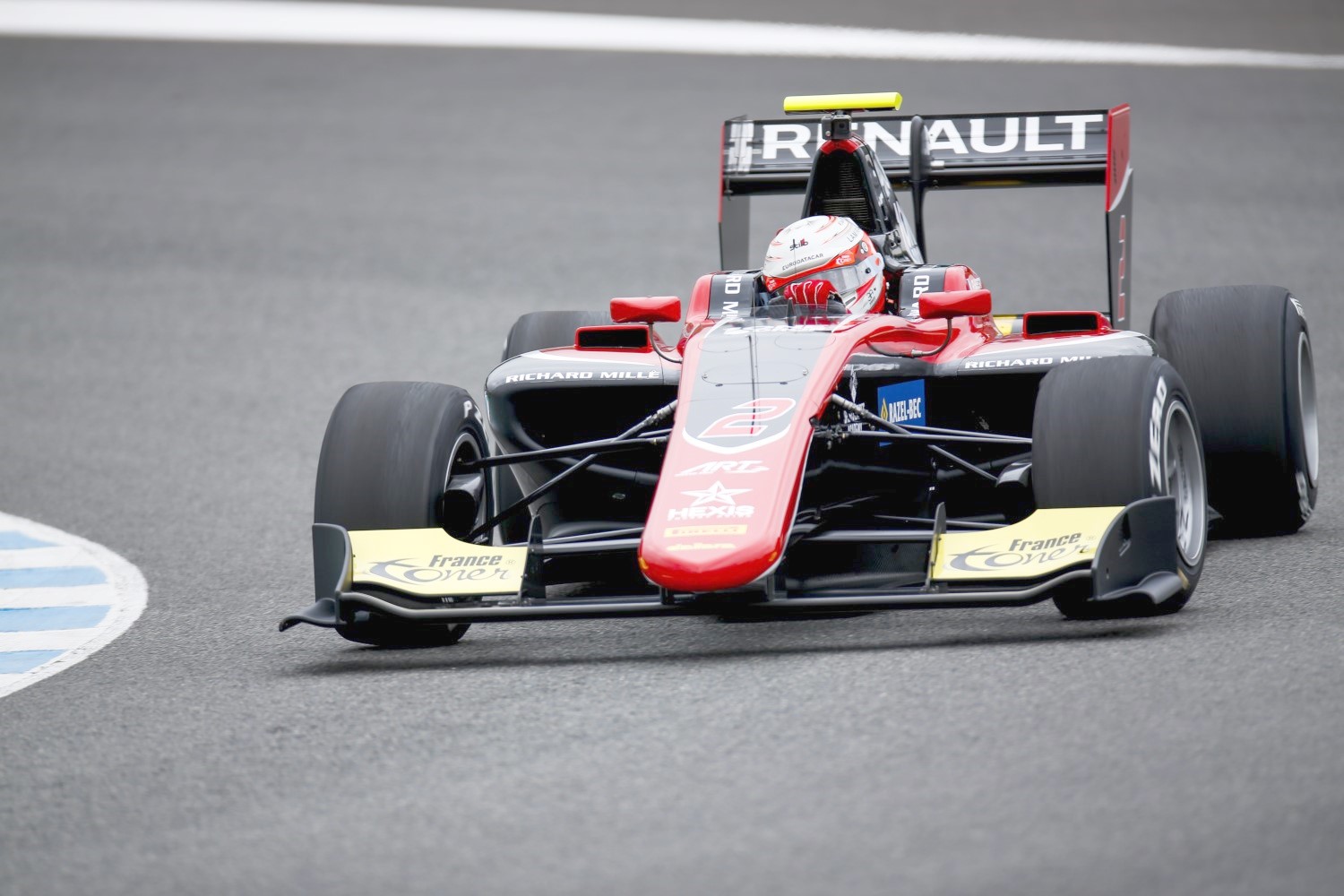 Anthoine Hubert was quickest overall in the first day of the second GP3 Series pre-season test at Jerez de la Frontera, Spain, setting a 1:30.449 in the afternoon session to beat MP Motorsport’s Dorian Boccolacci and Campos Racing’s Leonardo Pulcini to the top of the timesheets.

A damp, overcast morning did not deter the teams from running, queuing up their drivers outside of the pit garages ahead of the green light. Pedro Piquet led the field onto the circuit, closely followed by Trident teammate Giuliano Alesi and Arden’s Gabriel Aubry as a flurry of installation laps peppered the opening half-hour – which David Beckmann (Jenzer Motorsport) topped with the first sub-two minute time.

Alessio Lorandi (Trident) then took to the track on slicks, and set about whittling the pace down as running was stifled by the ever-changing track conditions. The Jenzer duo of Beckmann and Juan Manuel Correa went for reconnaissance laps on wet tires, but peeled in as drizzle hit the circuit, causing a short hiatus in the action.

The stalemate was broken by Ryan Tveter of Trident, persisting with slick tire running as other runners preferred wets, setting a new benchmark in the 1m34s. This was shortly followed by an abundance of slick-tire runs in the final hour, the times plummeting as the drivers began to get a grasp of the conditions.

Pulcini headed the timesheets going into the final half an hour of running, before stopping out on track to bring out a red flag. As the session restarted for a raft of final runs in the last 20 minutes, Jake Hughes of ART Grand Prix displaced the Italian at the top before Piquet found an advantage of three tenths over the British driver.

Niko Kari (MP Motorsport) then shaved a fraction from Piquet’s best lap, before Lorandi dumped the Finnish driver off the top of the timing boards in the final ten minutes. Piquet occupied third ahead of Dorian Boccolacci (MP Motorsport) as Correa grabbed the fifth best time on his final run. Simo Laaksonen (Campos) beat Hughes to sixth, as Pulcini took eighth ahead of ART duo Callum Ilott and Nikita Mazepin.

A dry track greeted the teams after lunch, and Boccolacci and Kari immediately took advantage as the MP duo were first on track. The circuit enjoyed plenty of action in the first half hour, and Hubert rocketed to the top of the timesheets after beating Lorandi’s time from the morning session.

Lorandi brought out a red flag as the clock approached the hour mark, going off at Turn 9, before Kari and Boccolacci got the running underway once more. The focus was on race simulations across the afternoon, with multiple teams trialing long runs and practice starts, resulting in very little change in the timing screens in the first half of the session.

As the teams moved away from race simulations in the final hour, the drivers were soon setting personal best laptimes. Boccolacci got within a whisker of Hubert’s best time with 15 minutes to go, ending up just two-hundredths slower than his compatriot.

As the pace continued to increase, the session was brought to a halt once more as Hughes brought out a red flag with five minutes remaining, going off at Turn 5 to effectively end the session. Hubert retained top spot in the timesheets, having been run close by Boccolacci.

Pulcini held on for third as Lorandi beat Laaksonen to fourth, splitting the two Campos drivers in the process. Alesi was ahead of teammate Piquet – who completed a session high of 49 laps – for sixth, as Mazepin, Tveter and Kari completed the top ten.