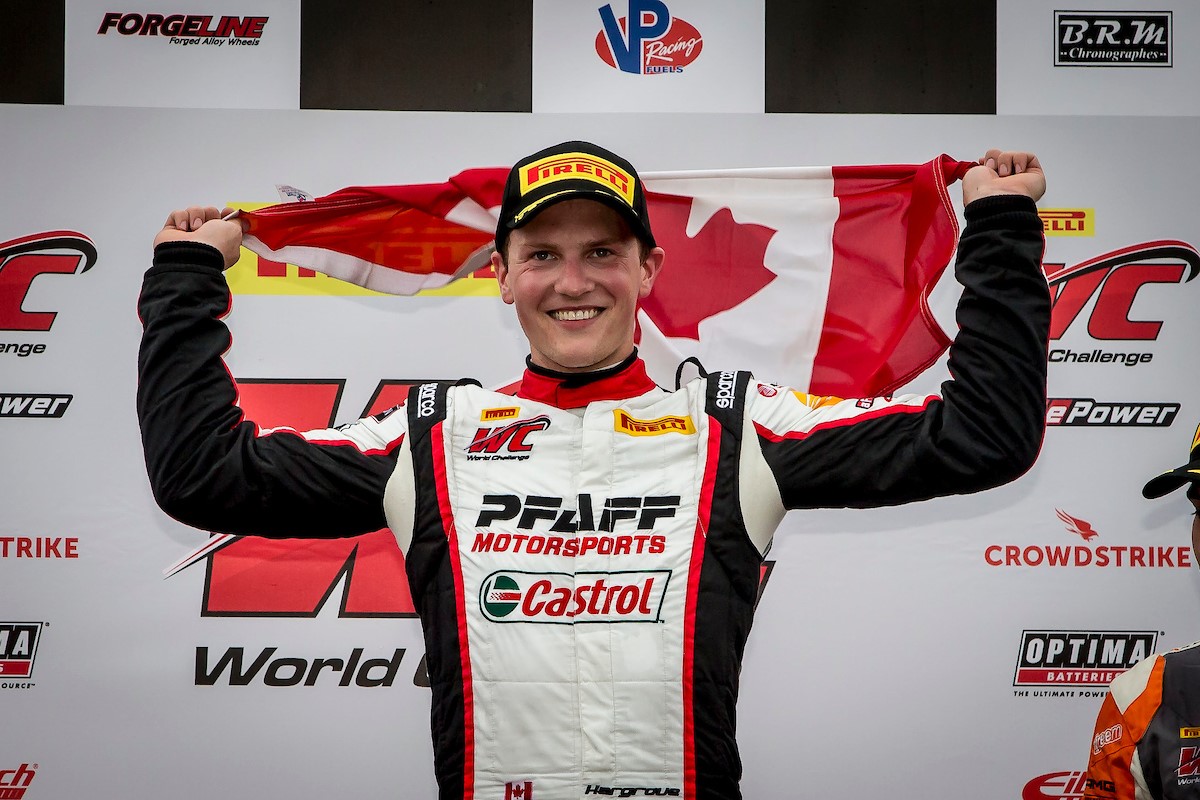 Former open-wheel ladder series star Scott Hargrove of Tsawassen, B.C., Canada has made a spectacular switch to sports cars this weekend with a pair of GT victories in the 2018 season opening Pirelli World Challenge doubleheader in the streets of St. Petersburg. Hargrove won Sunday’s GT Sprint event by 0.414-seconds in the No. 96 Pfaff Motorsports/Castrol Porsche 911 GT3 R sports car.

Hargrove, a former St. Petersburg winner in the USF2000 series back in 2013, was a star through the USF2000, Pro Mazda and Indy Lights prior to making his sports car debut this weekend, and the 23-year-old Canadian left little doubt that he could be a star in this form of motorsports too.

After coming from last to win Saturday in the 50-minute GT event, Hargrove started from the pole and held off Germany’s Daniel Keilwitz, who made his U.S. racing debut in the No. 26 Callaway Competition USA Corvette C7 GT3-R, to score a near perfect 51 of a possible 52 points with two wins and a pole position.

“It was a great weekend, a little unexpected after yesterday's qualifying but it was a great comeback for the team, Pfaff Motorsports," said Hargrove. “Today there was a much better view into turn 1 and when we pulled out onto the track, there were so many marbles from Indy Cars. I knew that I could quickly run into the wall going into turn one like we did yesterday, so I had to be a little bit smarter on that at the start.

“At the first restart, I had a good jump and I tried the exact same thing the second time but, of course, (Daniel) is smart and he figured out what I was going to do. So he got around me and then it was a fight side-by-side a couple of times, both slipping and sliding."

Hargrove dashed to the front at the drop of the green flag Sunday at the 14-turn, 1.8-mile temporary street circuit lining the St. Petersburg harborship. Fellow Canadian Daniel Morad in the No. 2 CRP Racing Mercedes-AMG GT3 pressured Hargrove in the early laps before Keilwitz took over the runner-up position on lap 11.

With Keilwitz charging from two seconds back, Hargrove made a couple of nice restarts after caution periods and held his advantage over the Corvette driver, Morad and Porsche’s Michael Christensen in the Tampa-based Alegra Motorsports Porsche 911 GT3 R.

Unfortunately, the Round 2 event was red-flagged on the 26th lap when 2016 PWC GT champion Alvaro Parente of Portugal had a massive impact in the turn 10 tire wall. Parente, in the No. 9 K-PAX Racing Bentley Continental GT3, was able to walk away from the incident, but the event was then concluded for the day after a major cleanup effort by the safety workers.

Parente was checked out at the track medical center Sunday afternoon and later released.

K-PAX Racing team statement after Parente incident: “Alvaro Parente was cleared from infield medical with no injuries. The strength of the Bentley played a key role in keeping Ã�lvaro safe. The cause of the incident is unknown at this time, and we will release information once all data has been collected and analyzed."

Following Hargrove and Keilwitz for the GT finish was Morad, who finished third in both GT events at St. Pete, Christensen, GTA class winner Martin Fuentes of Mexico City, Mex., in the No. 07 Squadra Corsa Garage Italia Ferrari 488 GT3, Rodrigo Baptista of Brazil in the No. 3 K-PAX Racing Bentley Continental GT3, 17-year-old Parker Chase of New Braunsfels, Tex., in the No. 19 TruSpeed Audi R8 LMS, Parente and Yuki Harata of Japan in the No. 55 Dream Racing Motorsports Lamborgini Huracan GT3.

“It's my first time here in the U.S. racing and that makes it really fun for me," said Keilwitz. “The fans are great here. It's a little different for me but I really like to race here, so it's a good first adventure for me. Unfortunately, we had the red flag. I think I could have managed to go a little bit faster, but I waited until the end. Now we'll never know what could have happened. The Corvette here is similar to the one in Europe. I've been racing Corvettes for nine years now, running the C6 GT3 and now the C7 GT3 for over two years now in Europe so I'm very familiar with them. I just have to get used to the tracks here."

“It’s great to be back in the Pirelli World Challenge," said Fuentes. “This is one of the best championships I've ever raced. The format that you guys have is amazing – from start to finish you push 110%. I'm back with Ferrari and I'm back on the podium and that always feels good so I'm happy to be here. There are a lot of young guys out there so I'm trying my hardest, trying to stay in shape, and I'm still young at heart. I'm happy to be racing against these young fast kids.

The upcoming Pirelli World Challenge events will be held at Circuit of the Americas (COTA) on March 23-25 with the season opening races for the GT SprintX, GTS SprintX and Touring Car classes including the all-new TCR division.