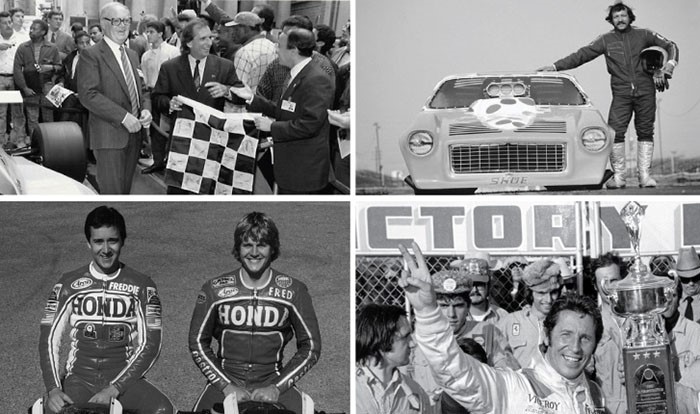 An illustrious group of motorsports legends and leaders as famous and accomplished as the iconic Inductees they will honor will join together next Tuesday, March 13, to enshrine the Class of 2018 at the 30th Annual Motorsports Hall of Fame of America (MSHFA) Induction Ceremony Presented by Bridgestone at the Shores Resort and Spa Hotel in Daytona Beach.

The Inductees will be lauded and ushered into the Hall by a gathering of equally notable presenters that also has combined to leave an indelible mark on the motorsports industry, both on the track and in the board room.

Andretti, the last American to win a Formula 1 race and World Championship, and a winner of both the Indianapolis 500 and the Daytona 500, will preside over the entire Induction Celebration as the event’s Honorary Chairman. Andretti will deliver a keynote speech at the onset of the celebration that will be sure to set the tone for a memorable evening.

Fittipaldi, a two-time Formula 1 World Champion, will present Patrick for Induction, reuniting a driver and team-owner combination that saw the legendary Brazilian win his first Indianapolis 500 in 1989 at the wheel of a Patrick Racing Penske Chevy. The win was the third and final Indy 500 triumph for Patrick in a memorable career that also saw him go on to win the 1989 CART Indy Car Championship with Fittipaldi after that May’s triumph at the Brickyard.

Helton is NASCAR’s most visible leader at the race track and was named to the role of Vice Chairman of NASCAR in February of 2015. Helton had served as NASCAR President since 2000 and has been with the sanctioning body in various roles since 1994. Appropriately, his career at the top levels of NASCAR began at nearly the same time as Gordon’s ascension to the top echelons of the sport, making Helton the ideal presenter to usher in the four-time Monster Energy Series Champion.

Spencer will have the honor of enshrining his former teammate Merkel, reuniting two riders as accomplished in international motorcycle racing as Andretti and Fittipaldi were around the globe on four wheels. Known as "Fast Freddie" – and not to be confused with his friend “Flying Fred" Merkel – Spencer was a record-setter. He won three World Championships and is the only rider ever to win the 250cc and 500cc Grand Prix World Championships in the same season in 1985.

Schumacher will present Buttera for induction and will no doubt touch on memories of driving the popular “Wonder Wagon" funny cars “Lil John" built. As a driver, crew chief and owner, Schumacher won five NHRA national event titles and has been even more successful since returning to drag racing in 1997 as the owner of Don Schumacher Racing (DSR). One of the top teams in the sport, DSR has won 318 NHRA national event titles and 16 world championships.

Two-time Trans-Am and four-time SCCA National Champion Tullius began his sports car career in the early 1960s driving white Triumph TR4s wearing No. 44, but his well-known Group 44, Inc. team soon became synonymous with Jaguar. At the pinnacle, Tullius and Group 44 Inc. were a major part of the IMSA Camel GTP era with the sweet-sounding V12 Jaguar XJR-5 and XJR-7 prototypes. Appropriately, Tullius will be enshrined into the Hall by Michael H. Dale, retired President of Jaguar USA.

Boles, who was named the President of IMS in the summer of 2013, returns to Daytona Beach for the second time in three years on Tuesday to present another Inductee into the Hall closely associated with the 2.5-mile Indiana oval. He enshrined 1955 Indianapolis 500 winner Bob Sweikert in 2016 and this year will present Fisher, the very man who founded and oversaw construction of the famous Brickyard over a century ago. Fisher also served as the President of IMS until 1923, a position Boles took over 90 years later.

Hughes, the renowned billionaire, was also a record-setting pilot and built some of the world’s most advanced planes. He will be Inducted into the Hall by aviation expert John “Lites" Leenhouts, CEO of the annual SUN 'n FUN International Fly-In Expo that will be held for the 44th time this April in Lakeland, Florida. The SUN ‘n FUN Expo campus is also home to the Florida Aviation Museum, which assisted the MSHFA in gathering information and memorabilia in support of the Hughes Induction.

This year marks the third consecutive year the induction ceremony has been held in Daytona Beach. The MSHFA moved to Daytona International Speedway (DIS) in 2016, from Novi, Michigan. The Hall is housed in the speedway’s expansive Ticket and Tours Building located in front of the famed 2.5 DIS tri-oval.

The MSHFA Museum will be the site of Monday night’s annual Heroes of Horsepower Reception Presented by Pirelli at 7 p.m. that involves the unveiling of the seven new inductees’ bronze busts that will be displayed permanently in the Hall.

Two other events are also on tap as part of induction-related activities: on Monday at 12 p.m., the Inductee Luncheon Presented by Chevrolet will be held at the DAYTONA 500 Club in the DIS infield, adjacent to Gatorade Victory Lane. On Tuesday at 9:30 a.m., the Inductee Luncheon Presented by Toyota will be held in the Rolex 24 Lounge in the speedway’s stadium grandstands.

Tickets for all events on Monday and Tuesday are available by visiting www.MSHF.com or by calling (386) 681-6843.