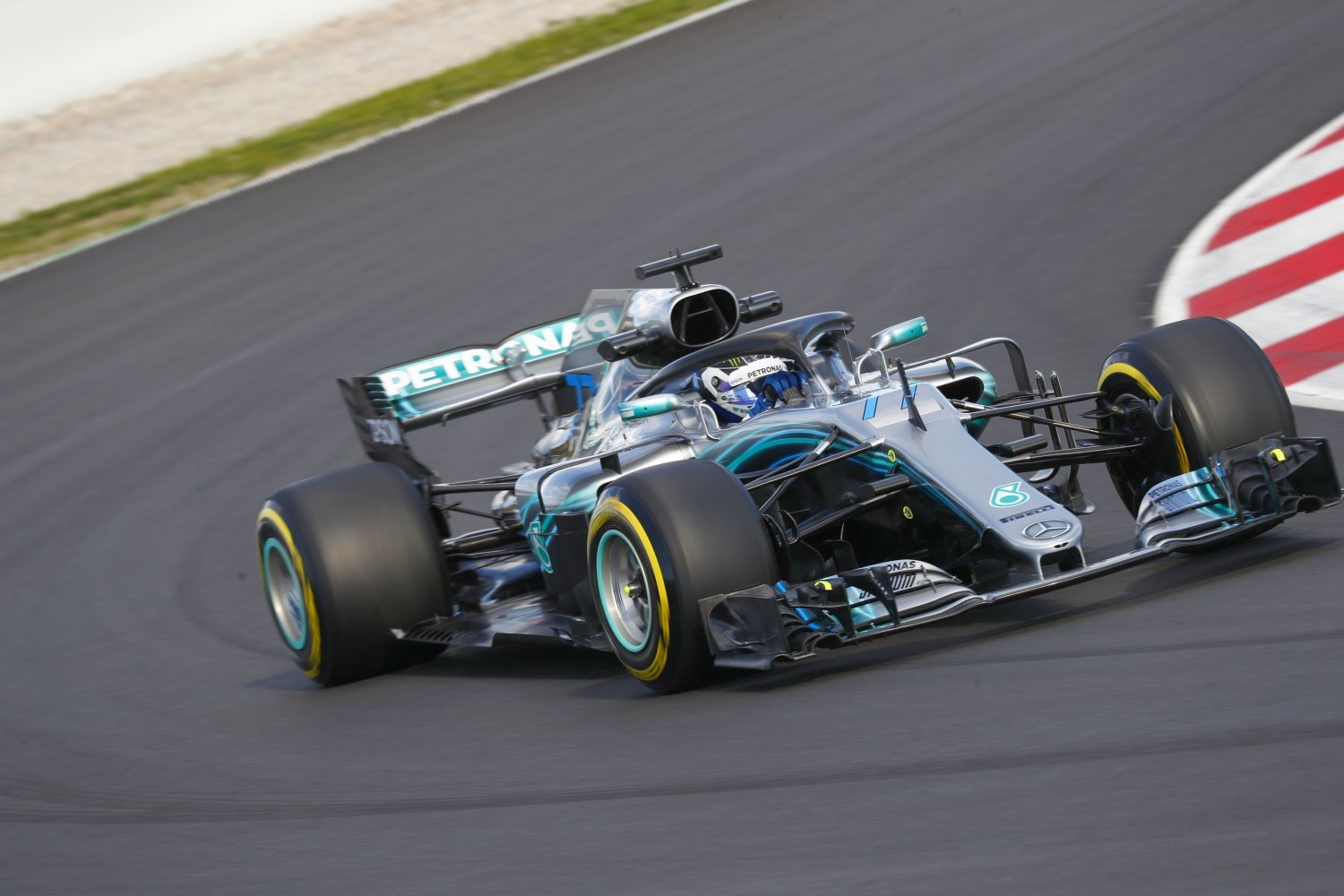 Mercedes not one second ahead – Bottas
(GMM) Valtteri Bottas has denied that Mercedes is a full second per lap ahead of F1's other top teams heading into this month's Australian grand prix.

One analysis shows that while qualifying will be closer, the silver car may be a full second per lap faster than Red Bull in a race simulation or 'long run'.

But Finn Bottas insisted: "We are definitely not a second ahead of the others."

Renault-powered Red Bull's Dr Helmut Marko thinks that whatever the difference, it is due to the engine.

"We have the better chassis," he is quoted by Auto Motor und Sport. "The difference is the engine."

And designer Adrian Newey thinks one of the big differences between Renault and Mercedes is how oil is consumed.

Ferrari, however, may be risking running out of oil altogether, as the plumes of smoke from the rear of the red car in Barcelona testing suggest.

Sebastian Vettel said that's not a problem, but he did admit: "There are still some puzzles that we need to understand."

The Pole was scheduled to test the Williams in Barcelona on Friday, but he gave up his running for race driver Sergey Sirotkin.

Kubica, 33, will be a vital addition to the British team in 2018, as Williams is struggling and the team's drivers are the young and inexperienced Sirotkin and Lance Stroll.

"Thursday morning was enough for me to understand the car to the point that I can describe its strengths and weaknesses to the engineers," he said.

Asked what the problems are, Kubica answered: "That's something that will stay in the engineers room.

"But I have a clear idea of where to improve the balance and the feel of the car. There are still issues with the behavior of the car and the sensitivity of the car to the tires.

"We have to make the tire window larger in order to give Lance and Sergey confidence. It's important because they're still quite inexperienced."

So while he sat out Friday's running, Kubica was later spotted meeting with former F1 boss Graeme Lowdon, who now runs the Manor sports car team at Le Mans.

It is expected that Kubica will sign a 2018 race deal.

"It's no secret that I talked with him," Kubica said. "I even tested with them."

Renault defends legality of 2018 exhaust
(GMM) Renault has defended the legality of its 2018 car's exhaust layout.

At the rear of the yellow and black car, the engine exhaust is pointed upwards towards the rear wing, which has been reinforced with heat resistant material.

And after running, the rear wing shows signs of heat charring, indicating that Renault is benefitting from outlawed exhaust 'blowing'.

But technical boss Nick Chester said: "I have not heard any complaints.

"You can arrange the exhaust in various ways and we have just put it closer to the top of the bodywork.

"On most of the cars, the exhaust gas flow is directed more or less towards the wing, which is why we've developed a solution to make the most of the opportunities that the regulations allow.

"If the exhaust pipe is located where it is allowed to be, I don't see the problem," he added.

(GMM) McLaren has defended the 'aggressive' design of its 2018 car.

Even after dumping Honda, the British team is still the team that endured the most troubled 2018 winter.

Many believe the problem can be traced to the aggressive packaging of the orange car, with burn marks and emergency venting seen at the back of the engine cover.

But team boss Eric Boullier insisted: "If you want to get back to the front, you have to develop aggressively.

"We have an ambitious design that will eventually pay off," he added.

The result of the troubled winter, however, is that Boullier cannot even guarantee a race finish in Melbourne.

"We have not done enough for that," he said. "We cannot say with certainty that we have already seen all of the problem areas."

But Boullier says there are positive signs, including that Fernando Alonso "if happy with the balance".

"He says he has seen enough to judge the car," the Frenchman added. "It's not enough for the engineers, of course. They want to see more data."

However, Boullier says there are strong signs that McLaren is in the fight somewhere behind the 'big three' teams, with Renault and Haas believed to be leading that group.

"At the front are Mercedes, Red Bull and Ferrari," he said. "The group behind them has moved closer together, and we're in the middle of that."

And so he rejected the claims of some pundits and fans that even after Honda, McLaren remains in crisis.

"I propose to return to this conversation after the first three races of the season," said Boullier.