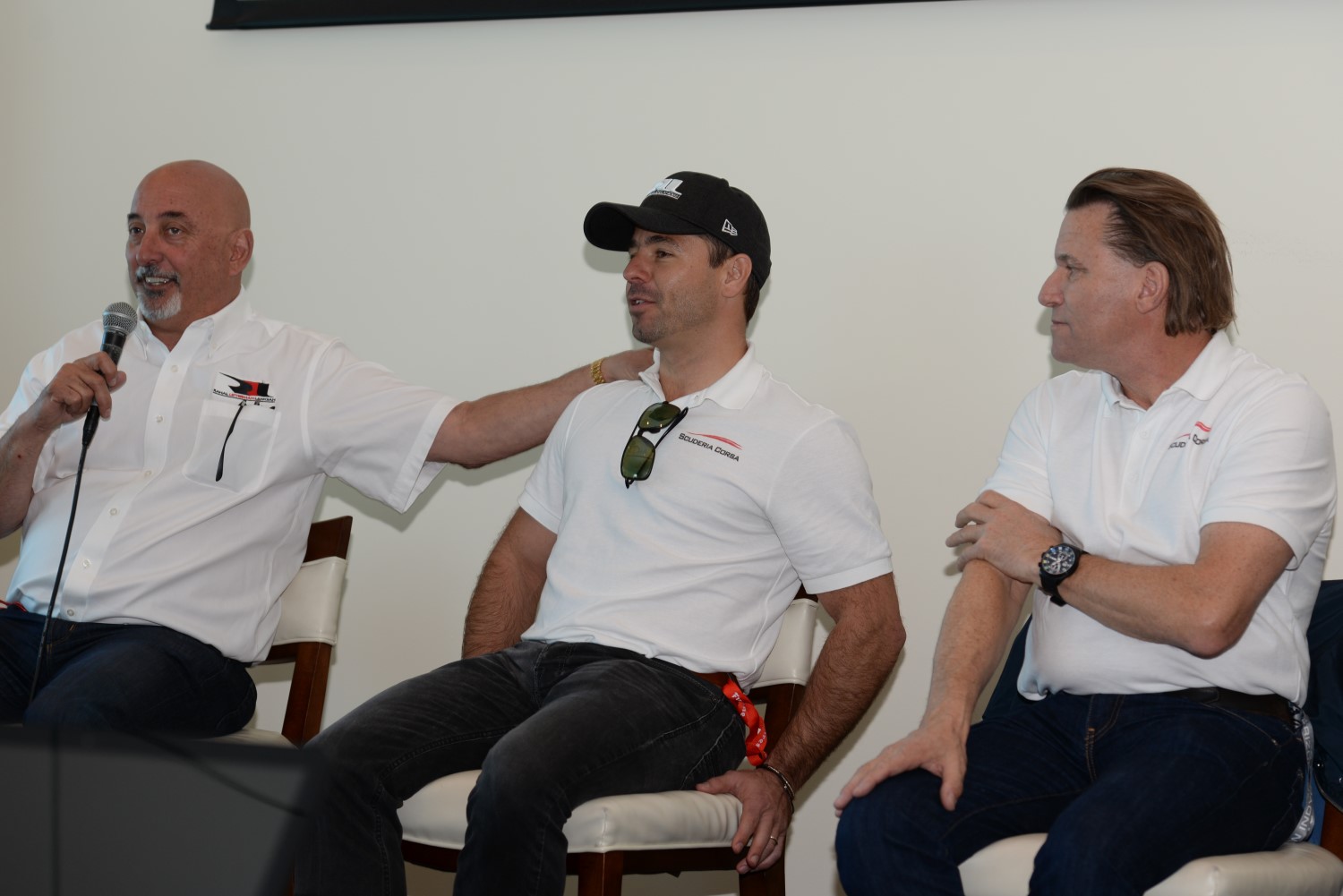 After much success in the IMSA SportsCar Championship, North American Endurance racing, and 24H of Le Mans, Scuderia Corsa is expanding its racing efforts to the open-wheel world of Indy car racing.

Team owner, Giacomo Mattioli, believes there is no better place to introduce Scuderia Corsa to Indy racing than at the legendary Indianapolis 500.

“It is an honor to compete at the Greatest Spectacle in Racing. To be a part of this great racing heritage and tradition is something I always envisioned for Scuderia Corsa and running across the yard of the bricks this year is a thrill. I am excited to be partnering with Bobby Rahal and Rahal Letterman Lanigan Racing, such an outstanding and established team, as well as having veteran IndyCar series driver, Oriol Servia, onboard."

For Bobby Rahal co-owner of Rahal Letterman Lanigan Racing, this partnership is one he is looking forward to.

"I am very pleased we were able to come to an agreement with Giacomo Mattioli for Scuderia Corsa's first effort in open wheel racing in the United States. Scuderia Corsa has a very successful track record in sports car racing and Giacomo’s success in the retail automotive marketplace is well known. And it goes without saying that we are very pleased to have Oriol back with us for our fifth Indy 500 together. He brings a lot of talent to the program and I have no doubt that together with Graham and Takuma we are going to have three very strong entries for the Indy 500."

Official practice and qualifying for the Indy 500 begins May 11th through May 19th, 2018. The 102nd running of the Indianapolis 500, Sunday May 27, 2018, will begin with live coverage on ABC starting at 12:00 pm ET. For more updates, stay tuned to Scuderia Corsa social media channels.

THE MODERATOR: We are joined now by three very special guests. I'll introduce them quickly before handing the microphone over to them for a special announcement.

First of all, joined by Stefan Johansson, Scuderia Corsa sporting director. Most people here are very familiar with them, a successful sports car and endurance race team with four IMSA GT championship wins, a 24 Hours of Le Mans win and a 12 Hours of Sebring, and 6 Hours of Watkins Glen victories.

Next to him, Oriol Servia, very well-known in the IndyCar realm. 201 starts in CART, Champ Car and IndyCar since his rookie season.

Stefan, I'll hand it over to you and let you reveal today's exciting news.

STEFAN JOHANSSON: Very proud to announce today that on behalf of Scuderia Corsa and our owner Giacomo Mattioli, we will enter a car in the Indianapolis 500 this year, the 102nd running, in association with Bobby Rahal's team and Oriol Servia as our driver.

ORIOL SERVIA: As you can imagine, I'm very excited first to be at the 500. If you remember last year's race, we were running really strong until it came to an abrupt end with 10 laps to go.

Especially doing it with Bobby's team, I'm pretty sure it's no surprise to anyone that it will be our fourth together – fifth actually. But obviously was not enough, so we needed another party to ensure we're going to win.

Obviously both teams are very successful, winning teams. I couldn't be happier that Dale agreed. When you put two teams together, you never know how it's going to come out. They both saw the advantage of taking, you know, this shot together. With our friends at Honda supporting, too. I couldn't be happier.

THE MODERATOR: (No microphone.)

BOBBY RAHAL: I think it's really kind of a great coming together of three very powerful forces. I've gotten to know Giacomo over the last year or so in our participation in the IMSA Series. They've been very, very successful with Ferrari in not just IMSA but in the WEC, in Europe and what have you.

Of course, I've known Stefan for many years, raced against each other in Europe back in the good old days. So it was great having Stefan's support to put this together, as well.

Then of course bringing Oriol back with us yet again, I think Oriol, we know that he can really contribute to our team's performance at Indy, at any race really, but Indy in particular. Last year we were pretty close to figuring the final three, then an incident about 10 laps to go ended that.

I look at Oriol being a part of the team as his really being able to contribute to refining the car, really creating great setup. Now this year with Takuma and Graham, we have three very, very strong entries in the 500, three strong chances to win. That certainly is exciting.

For me, obviously we're pleased to be a two-car team this year. Now we have a chance for a third. Definitely want to thank Giacomo for his support and interest in doing it. I think it's great for IndyCar racing that another team is entering the series, and perhaps it's only for the 500 this year, but I think it's clear, I don't want to speak on behalf of Giacomo, but I think there's interest in becoming more involved besides just the IMSA stuff.

I think it's great. Like I said, I don't know how many cars we're up to now at Indy, but I think there's going to be bumping for sure this year. As all of you know, it's been a long, long time since that's happened. Looking forward to a great month of May. Of course, we have a few races to worry about prior to that. We're pleased to have Oriol, Stefan and Giacomo with us for Indy this coming May.

THE MODERATOR: Since Giacomo is not here, we'll put the heat on Stefan to answer some of these questions. This is obviously a huge moment for Scuderia Corsa. Why did the program want to enter the Indy 500? Why is that important to the overall objectives of the team?

STEFAN JOHANSSON: Well, I think Giacomo, I'm speaking on behalf of Giacomo now because he's the owner of the team, but his ambition has always been to progress the team into other areas than just the IMSA Series. I think this is a very natural progression for that ambition basically.

IndyCar has got great momentum at the moment. I think the timing is great. Obviously what better place to start than the Indy 500? I mean, it's the biggest race in the world. It's a great place to put the team on the map, on a much larger scale than what we do right now.

THE MODERATOR: I believe I have a stat here. Obviously the team's first Indy 500, but also marking the first time entry in any open-wheel race since the team was founded. A very big and exciting announcement for the team and its program this year.

Q. (No microphone.)
BOBBY RAHAL: Well, I mean, I think Stefan mentioned, IndyCar is on a very positive track, so to speak. As you've noticed this year, we've been able to bring a lot of new sponsors into the series. I think they're in the series for various reasons, but certainly one of them is they see the future with IndyCar.

I know there's probably some exciting things waiting for all of us in the next month or so in terms of TV and other things, but it's on a very positive path. I think that's generating quite a bit of this. You look how many new teams are in the series this year, new drivers, how many rookies. Somebody told me, how many rookies are there in this race? Did I hear nine or something. Seven. It's been a long time for that, too. I think it's great.

Definitely this is going to generate a lot of international interest, given the relationship that Giacomo has with Ferrari. You've got to believe there's going to be a lot of Italian people following the 500 this year. Maybe we'll have to the change Oriol's nationality to Italian. Whatever it takes, right (laughter)?

I think it's all good. Another nice little note I think to show, as I said, that positive track that IndyCar is on right now.

Q. (No microphone.)
BOBBY RAHAL: You know, certainly the qualifying process is different now than it used to be. But I still think if the bumping is now on Saturday, there's a lot of pressure. I've been through that process before. I can tell you it's no fun to be one of those guys on the bubble.

I'm not quite sure how many entries so far at Indy. 34, 35? Now there's a couple that have yet to be announced that I know that are out there. Yeah, I mean, I think it's going to make for a very interesting May. For the spectators, the fans, it's going to be great. Once again, you're going to get in the race because you earned it, not just because you showed up. It should be very interesting.

Q. (No microphone.)
BOBBY RAHAL: I think bumping is important to the 500 because it's always been such a big part of the 500, the story, how many people failed, how many people made it at the last second. I mean, it adds certainly to the drama. I think it absolutely adds to the folklore of the 500. They write about the 500, the race itself. But clearly over the years, the whole qualifying process has been just as dynamic a story as the race itself.