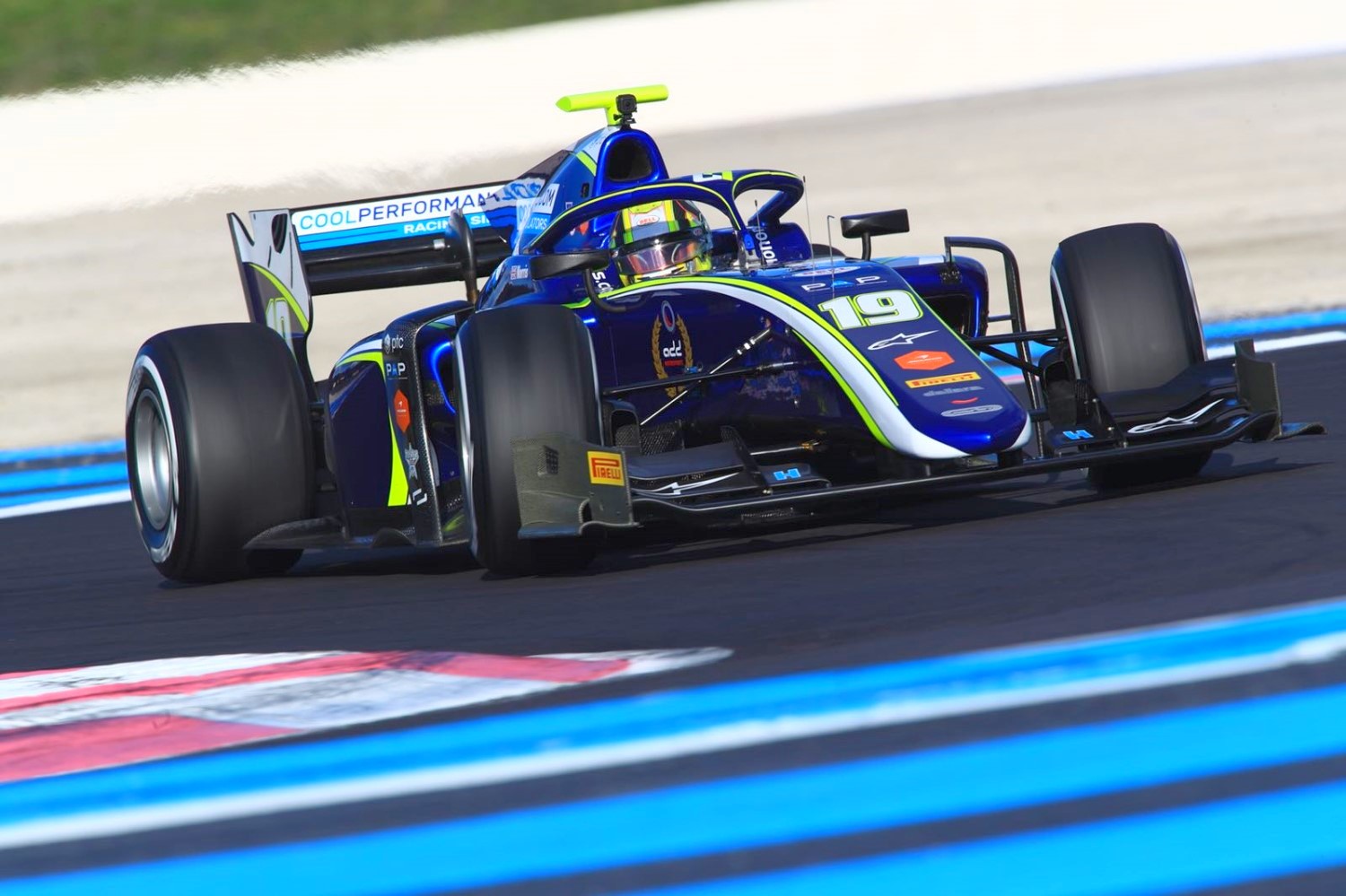 Lando Norris completed the first day of the FIA Formula 2 pre-season test at Le Castellet, France as the fastest driver overall, the Carlin driver setting a 1:43.095 lap during the afternoon session to head the timesheets ahead of Nyck De Vries and teammate Sergio Sette Camara.

A damp, overcast Circuit Paul Ricard greeted the teams as they sought to clock in their customary installation laps at the start of the day. Oliver Rowland was the first driver to hit the track on wet weather tires for the DAMS team, narrowly beating MP Motorsport’s Ralph Boschung out of the garage.

The first hour was punctuated with a few brief red flags following early spins, with Trident’s Santino Ferrucci and Sette Camara prompting stoppages as they got to grips with the wet track, while Louis Deletraz of Charouz Racing System came to a halt at the exit of the pitlane. At the end of the first hour, new Trident recruit Arjun Maini led proceedings ahead of Ferrucci.

Norris was first to break the two minute boundary at the midway point of the session, with the track slowly drying out. Soon, a number of cars were dipping into the 1m59s as they became accustomed to the conditions, although the circuit was not dry enough throughout the session for anyone to attempt a lap on slick tires.

A red flag in the final half-hour of the session was called for Alexander Albon (DAMS) who stopped at turn 2 due to mechanical gremlins, as running got back underway with ten minutes remaining. Although Boschung was quick on the draw at the restart to eat into Norris’ advantage, edging to within three tenths of the leader, the British driver was able to put first position well out of reach by going 0.6s quicker than his best time.

Norris was the only driver to break into the 1m56s, as his teammate Sette Camara slotted in behind Boschung for third. Albon was fourth quickest, ahead of Maini – who set a session high of 36 laps – and Arden’s Maximilian Gunther. Roberto Merhi (MP Motorsport) was seventh ahead of Deletraz, while Antonio Fuoco (Charouz) and Ferrucci completed the top ten.

ART Grand Prix’s Jack Aitken kicked off proceedings after the break to make up for a lack of mileage across the morning’s session, bolting on a set of medium compound tires after the circuit had dried. The Brit had the track to himself in the opening stages, before teammate George Russell and the Campos Vexatec Racing duo of Luca Ghiotto and Roy Nissany joined him.

After the first hour, PERTAMINA PREMA Theodore Racing’s De Vries led the standings ahead of Russell, the pace decidedly faster than the morning’s benchmark. Norris then immediately stamped his authority on the timesheets, and was joined by Sette Camara for a Carlin 1-2.

A brief red flag was called for Gunther who suffered a spin and stopped on track, but after the action returned Norris continued to whittle away at his best time, dropping below the 1m44s mark with a full house of fastest sectors.

Sean Gelael (PERTAMINA PREMA) wrested the second sector away from Norris, slotting in between the two Carlins as the session wound into the final hour. Ghiotto and De Vries briefly seized control of the timing boards, but with 20 minutes remaining Norris once again reclaimed the fastest time. It proved to be unassailable, despite De Vries’ best efforts in the latter stages.

Sette Camara was third quickest, ahead of Ghiotto and Russell. Gelael finished the day sixth fastest, completing a session-best of 40 laps, while Aitken beat Nirei Fukuzumi (BWT Arden) to seventh. Gunther and Rowland ended the session in the top ten. Over the day, 881 laps were for a cumulative total of 5000 km.

The action will resume tomorrow at 9am for the second day of the test; the morning’s running ends at 12pm, before the afternoon session takes place from 2pm to 5pm.