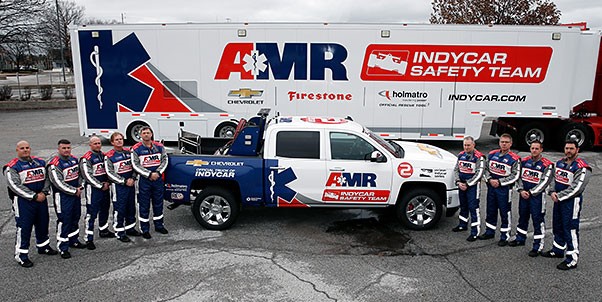 The INDYCAR Safety Team, an industry leader in motorsports, now has title sponsorship from a national leader in emergency medical transport.

The group now known as the AMR INDYCAR Safety team will continue to provide world-class medical response and care at all Verizon IndyCar Series and Mazda Road to Indy events.

"In our opinion, INDYCAR's safety team is the finest in motorsports," said Jay Frye, INDYCAR president of competition and operations. "We are excited to partner with AMR to continue building the legacy of this outstanding group."

AMR also becomes the official ambulance provider at IMS for the INDYCAR Grand Prix, the Indianapolis 500 presented by PennGrade Motor Oil and the Big Machine Vodka 400 at the Brickyard.

"The INDYCAR Safety Team has a world-renowned history of setting the standard for emergency services in motorsports, and AMR is proud to sponsor the group for the 2018 season and onward," said Ted Van Horne, AMR president and CEO. "With our focus on safety and experience providing onsite medical responses at numerous sports venues, there is a natural fit for us to sponsor the safety team. We are also pleased to be the official provider of ambulance services at the historic Indianapolis Motor Speedway."

As previously announced, Holmatro remains involved with INDYCAR and Indianapolis Motor Speedway as the Official Rescue Tool Provider. Holmatro tools have been used to expedite on-track medical response at Indy car events since 1991.