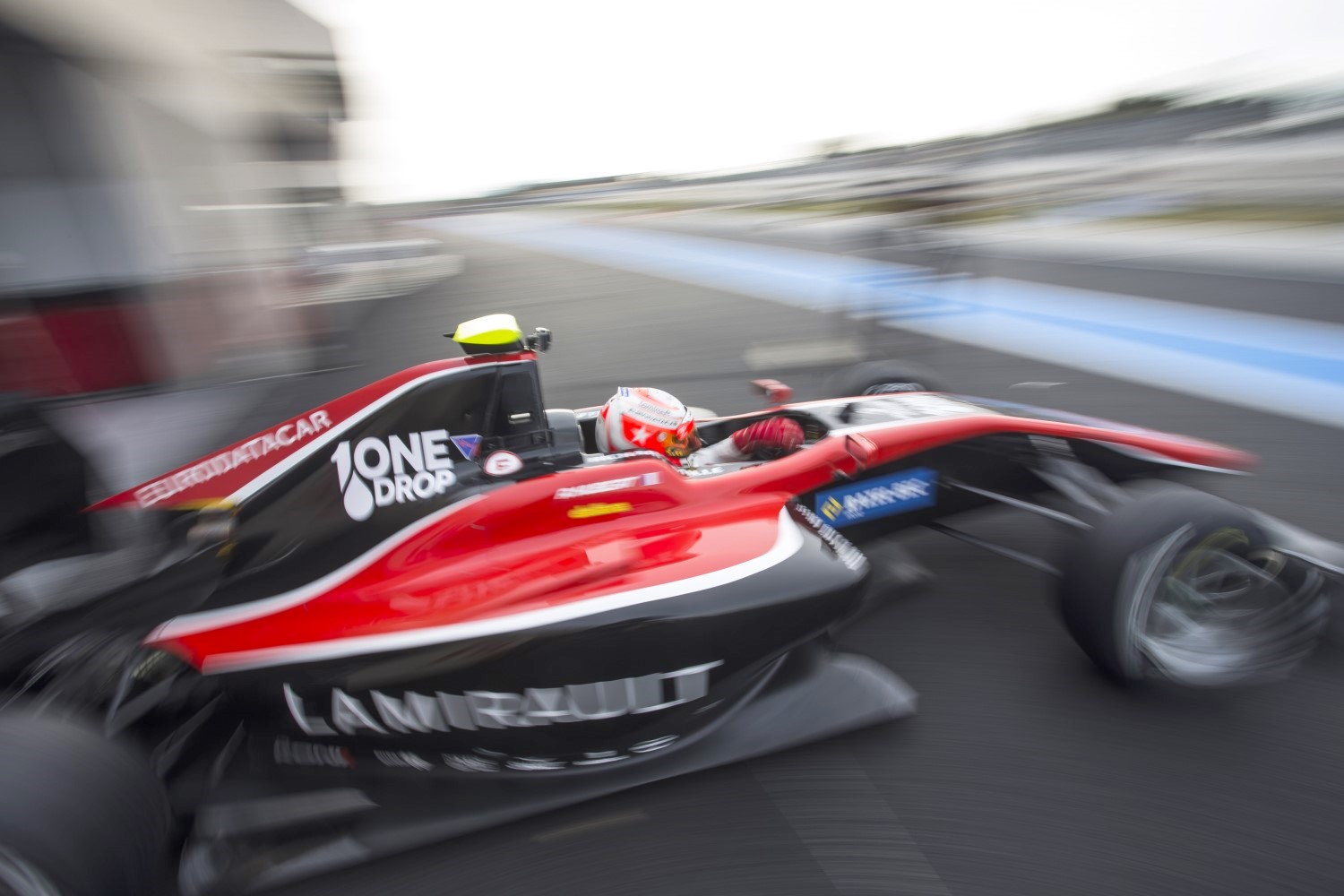 Anthoine Hubert set an overall fastest time in the first 2018 GP3 test in the morning of the second day in a 1:48.674, as ART Grand Prix teammate Callum Ilott topped a truncated afternoon session at Le Castellet, France with a 1:49.144.

Although overcast, dry weather conditions meant that the teams could start their morning running immediately on slick Pirelli tires. Trident was the first team to hit the track, sending out all four cars as soon as the light went green – Ryan Tveter leading the quartet onto the circuit.

The ART trio of Nikita Mazepin, Ilott and Hubert immediately set about trading best times, but after the first half an hour of running, Trident’s Alessio Lorandi sat atop the standings.

It wasn’t long until the front-running cars were lapping faster than yesterday, with Mazepin the first driver to beat the fastest Wednesday time set by Jake Hughes. Hubert was quick to displace his teammate at the top, leading the way after the first hour.

There was something of a lull approaching the midpoint of the session, but Ilott got the ball rolling once more midway through the morning’s running to break into the 1m48s bracket, holding top spot for almost an hour.

With 40 minutes of the session remaining, Hubert once more returned to head the timesheets with under a tenth in hand over Ilott. The Frenchman remained unchallenged throughout the rest of the morning, once more going into the break on top of the standings.

Ilott remained in second place, and Leonardo Pulcini (Campos Racing) broke ART’s stranglehold on the top three with a late 1:49.051 lap. Mazepin was fourth best ahead of Tatiana Calderon (Jenzer Motorsport), while yesterday’s fastest runner Hughes was sixth best ahead of Lorandi. Simo Laaksonen (Campos) was eighth ahead of MP Motorsport’s Dorian Boccolacci, while Pedro Piquet (Trident) rounded out the top 10 having completed a session high of 54 laps.

In opening 30 minutes of the afternoon session, Ilott was the first to exit the garage and followed out of the pits by Hubert. Jenzer pairing Calderon and Juan Manuel Correa were next to hit the circuit, while Boccolacci leaped to the top of the timing board. Piquet briefly led the session, before Calderon was the first of the pack to dip below the 1:50s mark in the afternoon.

Focus was once more on the longer runs across the afternoon, although newcomer David Beckmann (Jenzer) found half a tenth over teammate Calderon to lead the session at the halfway point.

ART were able to hit back, which allowed Ilott and Hubert to trade fastest laps before the conditions worsened. With an hour of the session left, a smattering of drizzle relegated most of the teams back into the pits, with Ilott ending the afternoon’s dry running with the best time after the break.

The rain briefly worsened, with new team MP Motorsport using the opportunity to send Boccolacci, Niko Kari and Leonard Hoogenboom out for some wet running. The majority of drivers followed suit, but Ilott’s time was left untouched for the final hour. Hubert’s time of 1:49.193 was enough for second, as Calderon, Piquet and Hughes completed the top five. Beckmann was sixth ahead of Tveter, as Mazepin, Diego Menchaca (Campos) and Lorandi finished inside the top 10.

This concluded the opening pre-season tests of the 2018 season. The GP3 paddock will gather next at Jerez de la Frontera, Spain on March 14-15.