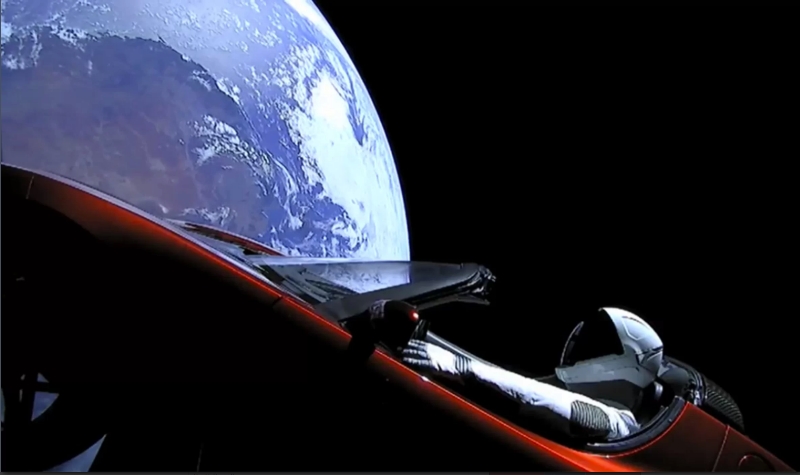 Elon Musk's personal Tesla might have gotten all the headlines during SpaceX's historic rocket launch last week, but the Falcon Heavy also carried a second, secret payload almost nobody knew about.

Stashed inside the midnight-cherry Roadster was a mysterious, small object designed to last for millions (perhaps billions) of years – even in extreme environments like space, or on the distant surfaces of far-flung planetary bodies.

Called an Arch (pronounced 'Ark'), this tiny storage device is built for long-term data archiving, holding libraries of information encoded on a small disc of quartz crystal, not much larger than a coin.

According to Arch Mission Foundation, the California-based nonprofit behind the technology, these Archs could "preserve and disseminate humanity's knowledge across time and space, for the benefit of future generations".

The Arch looks like a shrunk-down DVD or Blu-ray, but its potential for data storage goes way beyond any optical discs you have in your home.

The technology, developed by physicist Peter Kazansky from the University of Southampton in the UK, can theoretically hold up to 360 terabytes of data, about the same amount as 7,000 Blu-Ray discs.

But even more impressive than the data capacity is the physical longevity of the medium – the first two discs, called Arch 1.1 and Arch 1.2, are said to be two of the longest-lasting storage objects ever created by humans, theoretically stable for up to 14 billion years, thanks to '5D data storage' inscribed by laser nanostructuring in quartz silica glass.

The Arch 1.2 disc currently making its way through space on Musk's Tesla Roadster at a cruising speed of some 12,908 km/h (8,021 mph) has been loaded up with Issac Asimov's Foundation trilogy – a seminal sci-fi classic, similarly concerned with the concept of preserving human knowledge and culture in a vast, unforgiving Universe.

It's a mission perfectly aligned with the goals of the Arch's developers, who have named this maiden disc launch the 'Solar Library'.

"The Solar Library will orbit the Sun for billions of years," explains co-founder Nova Spivack.

"Think of it as a ring of knowledge around the Sun. This is only the first step of an epic human project to curate, encode, and distribute our data across the Solar System, and beyond."

Subsequent launches are planned for 2020 and 2030, with the 'Lunar' and 'Mars' Arch libraries intended to send curated backups of human knowledge to the Moon and Mars – with the latter disc hoped to serve as a useful aid for colonists on the Red Planet, helping them to 'seed' a localized internet on Mars.

If that all sounds pretty ambitious, the ultimate goal is even more fantastic.

"By eventually connecting the Arch Libraries, and the Arch storage devices they contain, through a decentralized read-write data sharing network that spans the Solar System, we can begin to grow and share a collective decentralized library of everything humanity learns, on every planet in our Solar System, and even beyond, as we spread," Spivack says.

Wow. Okay, so it's one heck of a moonage daydream, but if you don't believe it, ask yourself this: did you ever expect a Tesla Roadster would be orbiting the Sun in 2018? Peter Dockrill/Science Alert