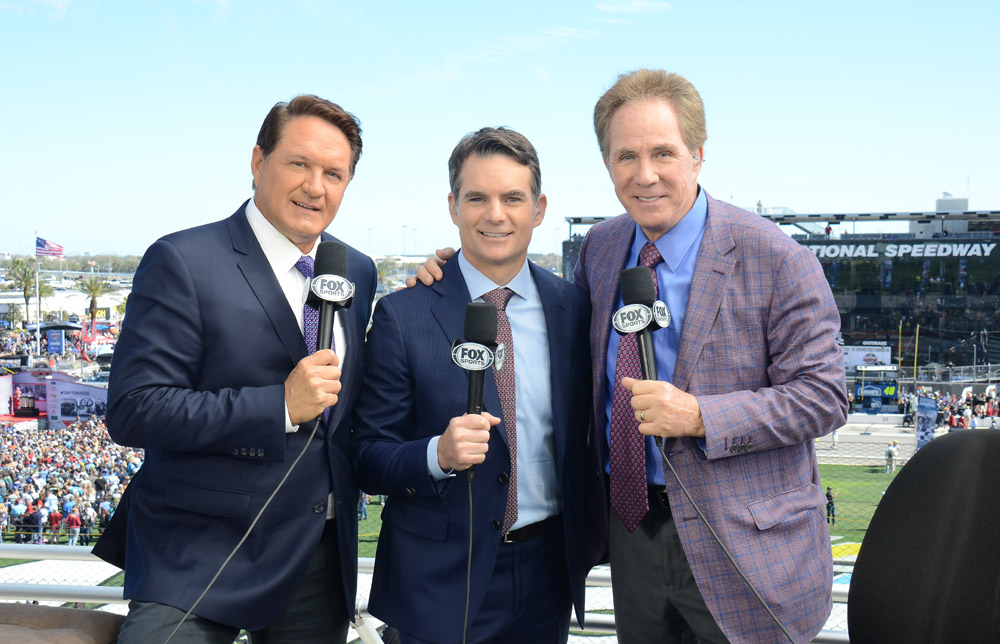 FOX Sports powers into its 18th consecutive season of NASCAR coverage, beginning with Daytona Speedweeks, which culminates with the 60th running of the iconic DAYTONA 500 from Daytona International Speedway on Sunday, Feb. 18 (2:30 PM ET). Live coverage begins at 1:00 PM ET with FOX NASCAR SUNDAY, preceded by NASCAR RACEDAY at 11:00 AM ET, also on FOX.

For its 15th DAYTONA 500, FOX NASCAR offers with seven NASCAR premier series championships’ worth of analysis and insight from Hall of Famer and three-time champ Darrell Waltrip alongside four-time champion Jeff Gordon, with veteran play-by-play announcer Mike Joy, covering his 43rd DAYTONA 500, and DAYTONA 500-winning crew chief Larry McReynolds with race analysis. This year’s running of the “Great American Race" marks the 20th anniversary of McReynolds leading Dale Earnhardt to his elusive DAYTONA 500 victory in 1998 atop the pit box for Richard Childress Racing.

The DAYTONA 500 is streamed live in both English and Spanish through FOX Sports GO, the critically acclaimed app that provides live streaming video of FOX Sports content at home or on-the-go. All FOX NASCAR programming is live streamed on FOX Sports GO. FOX Deportes, the No. 1 Spanish-language sports network in the U.S., offers live coverage of the DAYTONA 500.

THE CLASH AT DAYTONA

THE CLASH AT DAYTONA, the first NASCAR event of the season, moves back to an afternoon start time in 2018, airing live on FS1 on Sunday, Feb. 11 (3:00 PM ET). Joy, Darrell Waltrip and Gordon call the 75-lap, non-points race with McReynolds and pit reporters Little, Welch and Yocum. Myers and Michael Waltrip host the network’s coverage from the Hollywood Hotel.

DAYTONA 500 QUALIFYING is broadcast live on FOX on Sunday, Feb. 11 (12:00 PM ET), setting the prestigious first and second starting positions for the DAYTONA 500, as well as the starting order for the DUEL AT DAYTONA.

The complete DAYTONA 500 starting order is determined following the DUEL AT DAYTONA, live on FS1 on Thursday, Feb. 15 (7:00 PM ET). The pair of qualifying races is run under the lights with Joy, Darrell Waltrip and Gordon on the call, with race analysis by McReynolds and pit reporting by Little, Smith, Welch and Yocum. Myers and Michael Waltrip host.

Before FOX coverage of the DAYTONA 500 begins on Sunday, Feb. 18, NASCAR RACEDAY (11:00 AM ET) is broadcast moves from FS1 to FOX for the first time. John Roberts hosts with analysis from Jeff Hammond and Bobby Labonte from the Charlotte studio with at-track reporting from Cavanna and Kenny Wallace. NASCAR RACEDAY also airs immediately preceding THE CLASH AT DAYTONA and the DUEL on FS1.