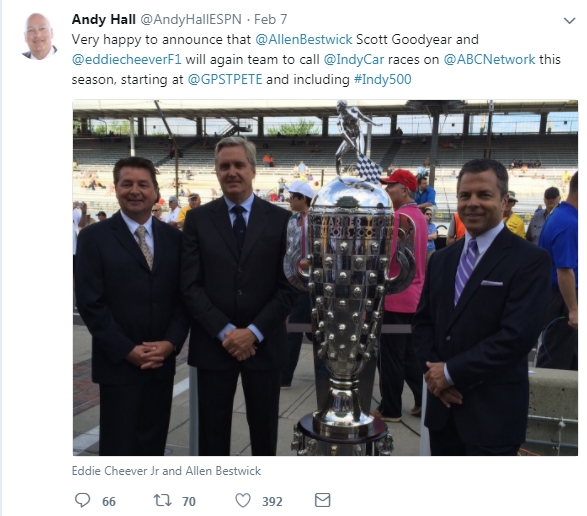 Bestwick and Punch had been confirmed victims of the layoffs, while Cheever was heavily rumored. SportsMediaWatch reports that Bestwick and Punch are the only two laid-off employees from ESPN to return to work there since 2016.

Those who remained on the IndyCar Series crew that were not laid off in 2017 including Scott Goodyear, Rick DeBruhl, and Jon Beekhuis will also return for 2018. Beekhuis and DeBruhl will continue to report from pit road for all five ABC races, while Dr. Jerry Punch returns for the Indy 500 only. ESPN provides the technical and programming support for sister station ABC’s coverage of IndyCar, which in 2018 includes St. Petersburg, both races at Indianapolis, and both races at Belle Isle.

The future for IndyCar on ABC beyond 2018 still remains uncertain. Bringing back Bestwick and Punch will certainly help in their coverage this year, but beyond that will face stiff competition from NBC Sports. They have committed long-term to Leigh Diffey, Paul Tracy, and Townsend Bell as their IndyCar team, with Diffey now even more available thanks to Formula One switching to ESPN.

If there is hope for ESPN and ABC to hang onto or even add to their IndyCar coverage, it is their steal of a deal with Formula One. By acquiring the world championship, the network has proven their doubters wrong about their commitment to motorsports, despite paying no rights fees for a multi-year deal. It is not expected that IndyCar would agree to such a deal, and will likely not confirm a new long-term broadcast plan until after the 2018 Indianapolis 500. BeyondTheFlag