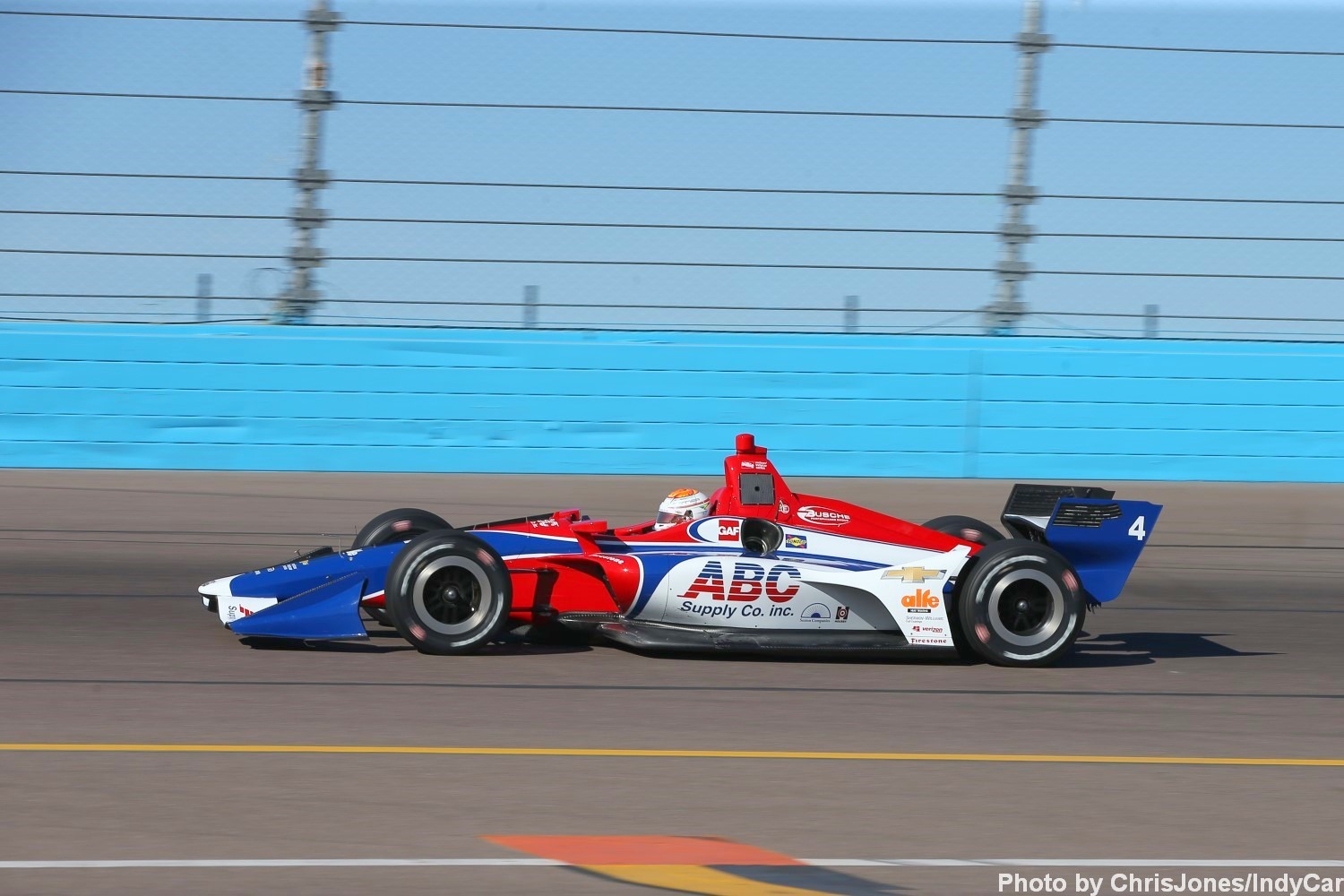 “It was a good day," said Leist, who ran a total of 63 laps. “The car was pretty good since the beginning. Tony did a few laps and did a great setup with the car. I think we’re going to be alright. We still have two more days to test. Tomorrow [Friday] is the day to test with the big guys so we’ll see how it goes."

Leist, who at 19 is the youngest full-time driver in the series this year, showed maturity in his approach to a track he had only driven on a simulator. He saw the track for the first time this week. His quick time of 19.97 seconds (184.236mph) was nearly a tenth quicker than fellow Brazilian rookie Pietro Fittipaldi’s time of 20.06 seconds (183.347mph). The grandson of Indy 500 winner Emerson Fittipaldi was also testing at Phoenix for the first time for Dale Coyne Racing.

Other drivers testing here in order of speed, were Robert Wickens, the Canadian rookie teamed with James Hinchcliffe, Spencer Pigot, who despite his 22 IndyCar starts for Ed Carpenter Racing (mostly on road courses) had never driven a short oval, Andretti Autosports rookie Zach Veach (who made his IndyCar debut in the Indianapolis 500 for Foyt last year), 2017 Indy Lights champion Kyle Kaiser driving for rookie team Juncos Racing and Gabby Chavez, who was doing a refresher test with Harding Racing, a new team that ran a few races last year.

A three-time winner in the Indy Lights Series last year, Leist explained, “I’ve never driven an Indy car on the ovals so this is the first time and I’m getting to know the track as well since I hadn’t raced here in Indy Lights. A lot of new things but in the same way, the car doesn’t change that much from the Indy Lights [car] so the technique you need to drive it is pretty much the same for me."

At the end of the test session, the ABC Supply team did a couple of practice pit stops which Leist said is one of the areas where he needs to get experience. “I never did pit stops in Indy Lights so since I’ve started testing in Indy car, I’ve tried to come into the pits always fast so I can get prepared for the race. It’s one thing to come in fast on a road course, but it is quite different coming in fast on an oval because you never know the level of grip the warmup lane has. It’s very tricky. There are a lot of things you have to have experience to know how much you can push, how much you need to brake before the pit lane turn. These are some things that in time will come."

Kanaan, who set up the car prior to Leist getting in it, gave his young protégé some tips for getting around the ovals. Kanaan, an oval meister, has won 15 of his 17 races on ovals. But even Leist wasn’t quite prepared for TK’s reaction when he got out of the No. 4 Chevrolet

“When Tony jumped out of the car and said to me, ‘Whoa, this is fast!’ I was like, if he thinks this is fast, I wonder how I’m going to feel!"

At the end of the day, he was smiling–apparently feeling just fine.