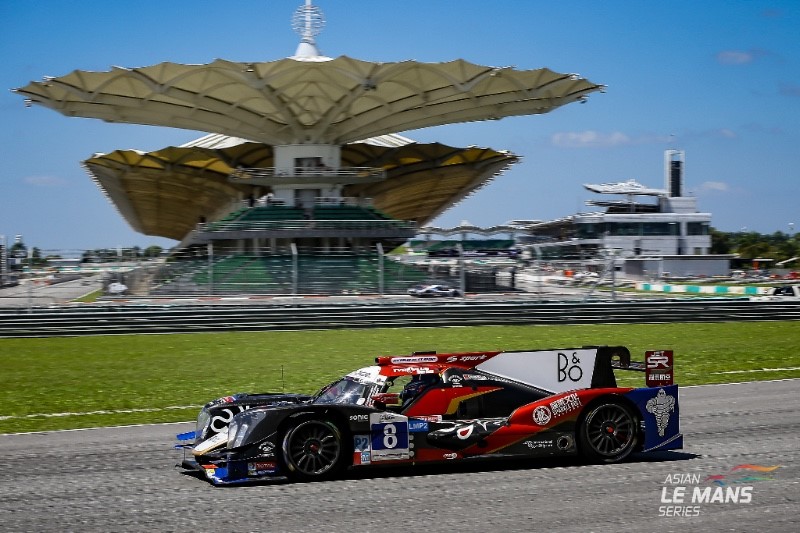 In a race run in extreme heat throughout, both on and off the track, the final race of the 2017/18 Asian Le Mans Series has delivered yet another race that came down to the wire.

It was yet another faultless run from the crew in the #8 Jackie Chan DC Racing x JOTA Oreca 05 Nissan with their drivers, Stephane Richelmi, Harrison Newey and Thomas Laurent coming home first. The drivers and their teams have performed well all season and proved deserved champions, their remaining title challengers coming into the final race from the #37.

In LMP3 it was a case of agony and ecstasy for our Championship contenders. As has been the case all season there were four teams that led at various points during the race. Ultimately it was the #6 Jackie Chan DC Racing x JOTA Sport Ligier JSP3, driven by Guy Cosmo, Patrick Byrne, and Gabriel Aubry that won the class.

In the closing stages of the race, it was the #18 KCMG Motorsport Ligier JS P3 with Josh Burdon in the lead of the class, however a penalty for a not meeting their required pit stop time saw the #18 receive a 1 second Stop and Go penalty, ceding the lead to the #6, Gabriel Aubry fending off Burdon’s late race challenge to bring the car home first and claim the LMP3 Class win and the very important invitation to the 24 Hours of Le Mans for the Jackie Chan DC Racing x JOTA Sport team.

In GT it was a similar story with the #66 Audi Sport Customer Racing Asia by TSRT Audi R8 LMS leading the way deep into the third hour after a very strong start from all three drivers, Massimiliano Wiser, Weian Chen and Mitchell Gilbert. The car lost drive on the main straight, and although Gilbert was able to get the car running again, the team was forced to retire the car shortly in the pits.

At almost the same time, the #90 FIST Team AAI Ferrari 488 GT3 also hit trouble, with a spin causing the car to get beached in the gravel trap dropping down the order after an earlier lengthy delay with the car refusing to refire.

The #90 was able to get back on track and finished the race 2nd, claiming a 1-2 for the FIST Team AAI team in the Championship, and of course to win the two invitations to join the LM GTE Class in the 24 Hours of Le Mans later this year.

LMP2 – #8 Jackie Chan DC Racing x JOTA Oreca 05 Nissan
Stephane Richelmi:
“Winning is never easy, but for sure I am happy about the job we have made and everyone has done a flawless job. A big congratulations to my two team mates, we all could see in WEC what Thomas could do but for Harrison he came from Formula 3 and had a lot of things to manage, and he made no mistakes, especially in Buriram.

“Both of them managed the gear box issues there like they have a lot of experience and I was very impressed. And the team of course again did a great, great job."

Harrison Newey (Rookie):
“I have definitely enjoyed it. The ACO has put on a great show here. The Championship has been brilliant. I think the primary reason for motorsport is to have fun and I have definitely had fun – it was a super job by the organisers!

“I had never even sat in a prototype prior to racing at Zhuhai and I found myself at home very quickly although I did do two races with my visor closed because of the light! I have to share a seat with someone as well! It is all new challenges and it has been super fun!

“I really have to thank the team for teaching me about sports cars – they really help me – I wouldn’t be here with-out them! They have come straight from Daytona so they deserve to win the Championship.

Thomas Laurent
“It is a very special day today – I did my first endurance race here in Sepang with Jackie Chan DC Racing in LMP3. We won all the races, but unfortunately I missed one race, so the team won the Championship, but not me. Second year it was the same, but this year I got what I wanted 3 years ago. So it is really nice for all three of us to win it together this year.

“I think the team has done an amazing job for the last three years – I really enjoy driving with them. It is unfortunately my last race with them but maybe I will come back with them later.

“It is here that I learned the most about racing. My team has taught me a lot, and it is why I am here in this position racing in LMP1 this year."

LMP3 – #6 Jackie Chan DC Racing x JOTA Sport Ligier JSP3
Guy Cosmo
“It has been a long journey for me to get here – my upbringing was not the same as the young kids these days with a plan – my times started as a hobby with my father! I am so very thankful to be here!

“You always have the Championship goal in mind anytime you show up – you want to win – but first and foremost it was an opportunity for Patrick to dive into professional sports car racing. I think he has done it with flying colors.

“It has been really enjoyable for me, and I am so proud of Patrick.

Patrick Byrne
“This feels great! It is my first Championship so it feels really good. The aim was to have fun, step up to the next level in the LMP3. We have never been to any of these tracks, and while we have a fantastic team that works really hard, it is a lot harder to learn the new tracks, it takes more effort to do everything. But everything we have put into it we have got back so I am really happy!

“We would love to come back – we have had a lot of fun and it is a great series. The quality of driving has been great – I think this year was the most safety cars we have had all season and the incidents were not that serious. The only shame is that the races are on in the night back home! I would definitely say to anyone they should come over and try it! Great racing, great tracks, and a really god way to see Asia!

“I would like to say thank you to the team at DC Racing JOTA, thanks to Gabriel for joining us, both he and guy drove well – we couldn’t have done any of it without them!"

Gabriel Aubry
“I wanted to keep really quiet on the radio in the last stint, I just focused on my driving. This was just my second race in a closed cockpit – it is really hot – but I am really pleased I put in all the hard work training before we got here, it really paid off! I really felt good, it almost felt like an open wheeler race! I like sports car and endurance racing! We will keep the conversation open with JOTA and the team though and perhaps I will come back to the Asian Le Mans Series!

GT – #91 FIST Team AAI BMW M6 GT3
Markus Palttala
“First of all it is great to be here in the Asian Le Mans Series, with a very nice team. We were a little bit worried ahead of the race especially because of the heat and how abrasive the track here. In the end we had no issues, so it was a great job by the guys in the team."

Jesse Krohn
“You never hope for bad luck for you competitors – you want to do it on track, with pace with great team work, so it was unfortunate to win like this. But I have to say I was pretty relived at the end because we knew if we had to push to the limit we may have issues so in the end I am very happy with the result."

Junsan Chen
“It was our plan for this season to win the two Le Mans 24 Hours entries, This is the first time that we will return to the Le Mans Circuit and we wish for a better result than last time we were there.

“Because we have just finished the race I have no answer, but after now we have to sit down and have a serious conversation. We will immediately sit down with the team after here. We will then make the decision, so I do not have an answer for you now."