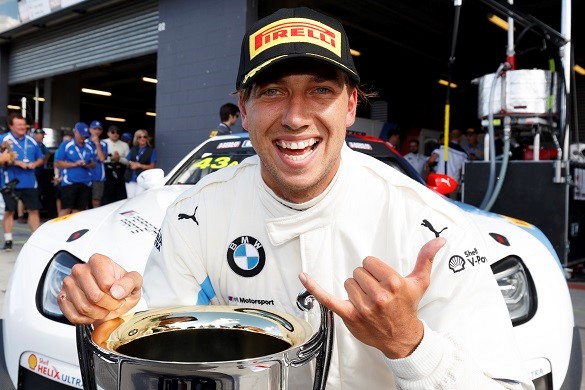 Chaz Mostert has taken the Allan Simonsen pole award trophy ahead of tomorrow’s Liqui-Moly Bathurst 12 Hour with a blistering lap in the Top 10 Shootout. (See video of lap at bottom)

The BMW Team Schnitzer driver, who shares the M6 GT3 with co-drivers Augusto Farfus and Marco Wittmann, lapped the 6.2km Mount Panorama circuit in a 2:01.934, holding off the charging Audi of Kelvin van der Linde who was unable to better Mostert’s time.

Van der Linde’s lap, which was only 0.235s slower than Mostert’s, was good enough to secure the South African Audi gun a front row start for tomorrow’s race in second, aboard the #22 Jamec Pem Racing Audi he shares with Garth Tander and Frederich Vervisch.

“We were close last year in the Pro-Am entry but it’s pretty special to go to the pointy end and actually get the pole this time with Schnitzer Motorsport and the BMW Motorsport group," said Mostert.

“For me it’s amazing, the boys gave enough trust in me to qualify the car and we made the car better and better over practice. It’s a lot of hard work to fly a car all the way from Germany to put it on the pole so it’s fantastic."

The sister Audi of Christopher Haase, Christopher Mies and Markus Winkelhock will start from third on the grid, with Haase setting a 2:02.434 as being the fifth car out on track.

Reigning Supercars Champion Jamie Whincup had a tough day in the Mercedes AMG and will start from grid spot 16 for tomorrow’s race.

Lee Holdsworth became a casualty in qualifying when he spun his Audi R8 on the way up the mountain, causing a lengthy red flag. Despite the heavy crash the team has declared the car a starter for tomorrow, starting from 20th on the grid.

Aside from Whincup missing the shootout, the other major news of the day was the elimination of the Steven Richards Motorsport BMW after being found guilty of an unspecified technical breach.

Tomorrow’s Liqui-Moly Bathurst 12 Hour begins at 5:45am local time, with Live coverage across Australia kicking off at 5:30am on channel 7mate.