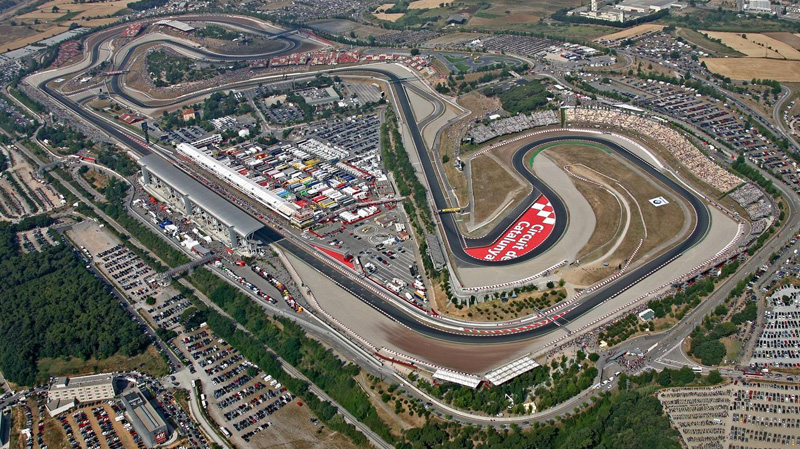 (GMM) Operators of the Circuit de Barcelona-Catalunya are rushing to get the track back up and running after a full re-surfacing.

We reported this week that Pirelli is concerned that the new track surface could be problematic for F1's forthcoming winter test season at the Spanish venue.

Now, Spain's Diario AS reports that the Barcelona track has vowed to finish the work by Friday, with cars to exit the pitlane in anger by the weekend.

"The sooner you start to put rubber down, the more grip there will be for the start of F1 pre-season testing on February 26," the report said.

Diario Sport said the "final touches are being made" now, ahead of a two-day GT race weekend.

"Everything that affects the track has to be finished because we have to be operational," confirmed Carlos Fradera, who is responsible for circuit maintenance.

The report said it is Barcelona's third full resurfacing since 1991.

(GMM) Paul Ricard has suggested it would welcome a proposal to tweak the start time of its French grand prix this year.

We reported this week that, to avoid a clash with a world cup football match involving England, the French GP could be postponed until 4.10pm in late June.

"It would provide guests with the time to have lunch and get through traffic for their arrival at the circuit."

(GMM) The Nurburgring has indicated it wants to return to the F1 calendar in 2019.

Although there was no German grand prix at all in 2015 or 2017, the country is returning to the schedule this year with an event at Hockenheim.

The recent calendar gaps were caused by the Nurburgring's financial problems, but now boss Mirco Markfort says talks are back on with Liberty chief Chase Carey.

"We want to get formula one back at the Ring," he told Kolner Express newspaper. "If possible already in 2019."

Markfort warned: "But this is only possible if meaningful economic conditions are taken into account.

"The business model a la Ecclestone is passe. It does not pay off for us in ticket revenue alone."

"We need clarity by the Hockenheim race in July," explained Markfort.

That is despite the fact that it has been announced officially that the Spanish driver will contest not only Le Mans, but other WEC sports car races for Toyota this year.

But McLaren executive Brown told the Spanish sports daily AS that Alonso will not miss any grands prix.

"His priority is formula one, so we are open to other racing activities provided that formula one, which is his number 1 priority, is not compromised in any way," he said.

Alonso missed Monaco for the Indy 500 last year, but the big difference in 2018 is that McLaren is now expecting to field a much more competitive Renault-powered car.

"Everything is going really well with the design of the car," Brown revealed.

"We just passed the crash test and everything has gone according to plan. We are going to present the car on February 23 and be on track for the first time on February 26.

"All the simulations put us where we wanted to be last year. Sometimes the simulations don't work when you go to the track, but last year it worked more often than not so I think we're going to have a solid season," Brown added.

(GMM) Paddy Lowe says Williams' 2018 driver lineup is an "investment" rather than a "gamble".

The British team has been criticized for choosing the well-sponsored Russian rookie Sergey Sirotkin instead of Robert Kubica.

He will be paired with the regularly-criticized Lance Stroll, who is also often referred to as a 'pay driver'.

Their combined age is 41, making it easiest the youngest driver lineup on the F1 grid.

Defending the decision to sign Sirotkin, who is backed by the Russian banking billionaire Boris Rotenberg, Williams technical boss and shareholder Paddy Lowe said: "We chose him as the best driver available to us.

"We are sure that he will be very fast, consistent and calm in his work," Lowe told Russia's Sportbox.

As for whether Sirotkin-Stroll really is the best possible Williams driver combination, Lowe responded: "I would not compare it to gambling.

"We understand that there are some disadvantages, but at the same time we're making an investment.

"A young driver is an investment in a long-term future and a long-term success that can come to the driver and the team. We prefer to see a rising star in Sergey and hope to work with him for long-term and joint success," he added.

(GMM) Niki Lauda has denied that he is beginning to pull away from formula one.

Throughout the team's ultra-successful 'power unit' era, the F1 legend has been Mercedes' F1 chairman alongside team boss Toto Wolff.

But Lauda will no longer be an expert TV pundit for the German broadcaster RTL in 2018, and in recent days he made a successful bid to buy back his airline Niki.

Asked if it means he is scaling back his F1 involvement, the 68-year-old Austrian said: "Why? Nothing changes.

"As always, I will be at every grand prix and involved at Brackley as often as necessary," Lauda told Speed Week.

His fellow Mercedes chief, Toto Wolff, agrees: "Niki's work on our supervisory board was never in question. There are no problems at all."