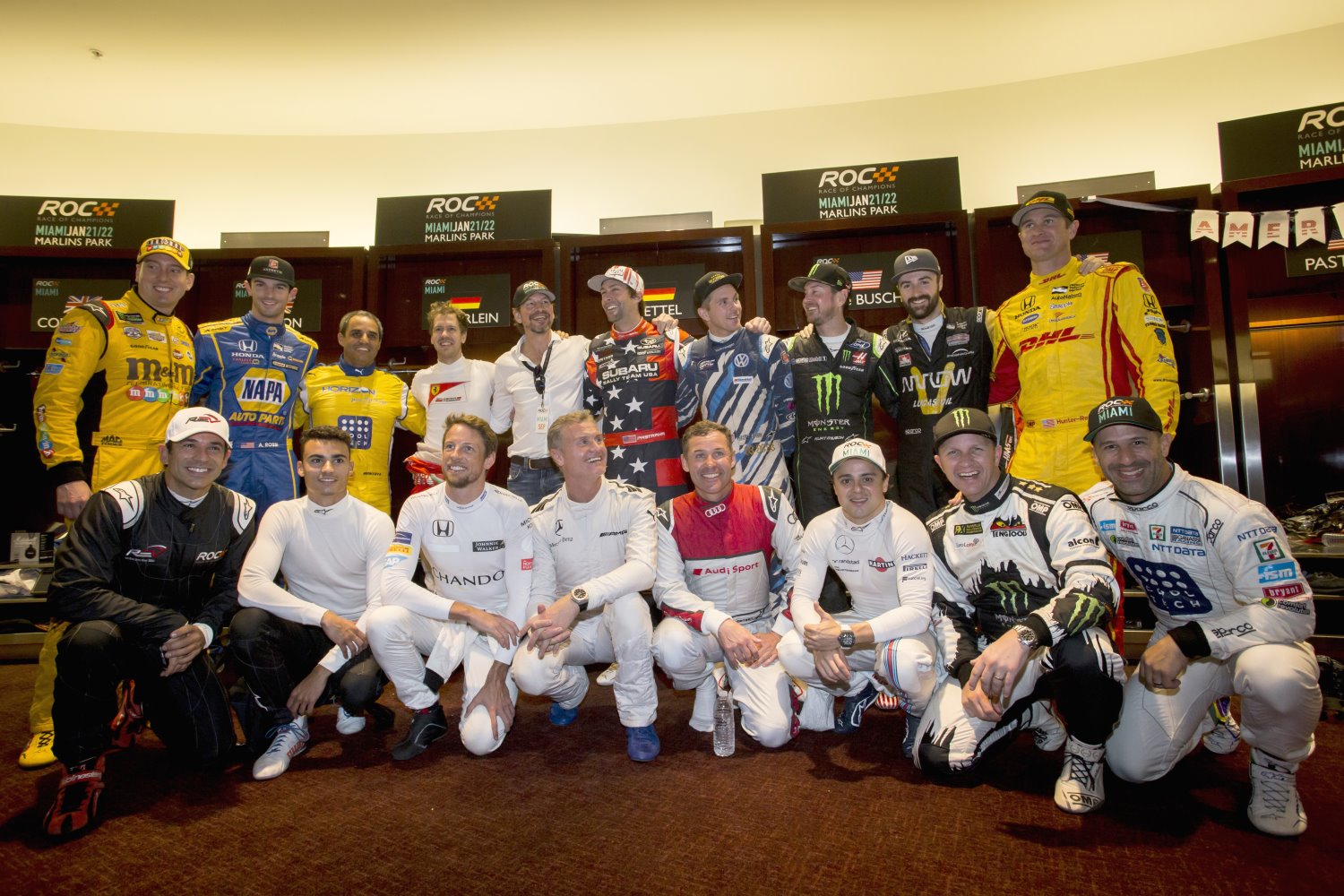 Many of the reigning champions who dominated motorsport series all over the world in 2017 have joined the field of driving royalty assembling for next week’s Race Of Champions – to be held on February 2-3, 2018 in the Kingdom of Saudi Arabia at Riyadh’s King Fahad International Stadium.

The ROC Riyadh field already includes some of the greatest names in the history of motorsport such as Formula 1 stars, Indianapolis 500 winners and Le Mans legends. Now they will be joined by a host of current stars who are at the top of their game in everything from rallycross to touring cars to endurance racing to NASCAR.

Germany’s Timo Bernhard will make his ROC debut after a stunning year for Porsche in which he took his second win at the Le Mans 24 Hours (alongside Brendon Hartley and Earl Bamber) before adding the overall FIA World Endurance Championship. He will be joined in Riyadh by his fellow countryman Rene Rast, who stunned the tin-top world by sealing the 2017 DTM crown in a Team Rosberg Audi in his first full year.

Sweden will also be well represented in Riyadh, starting with another ROC debutant: 2017 FIA World Rallycross Champion Johan Kristoffersson had a dazzling year, at one point taking five successive wins to see off a star-studded field and romp to the crown. Young Swedish charger Joel Eriksson will be in action too, after a season in which he took seven FIA European F3 Championship wins and was pipped to the title by British ace Lando Norris. The pair can now resume hostilities next week…

There will also be two Mexican drivers making their Race Of Champions debuts in Riyadh after sealing championships in 2017. Triple Daytona 24 Hours winner and four-time Grand-Am Champion Memo Rojas added the European Le Mans Series title to his impressive racing roll of honor, and he will now be joined on the ROC parallel track by newly-crowned NASCAR Mexico champion Abraham Calderon.

The new arrivals will have their work cut out against a line-up of motorsport legends including double Indianapolis 500 winner and F1 veteran Juan Pablo Montoya, who will defend the ROC Champion of Champions crown he won on his debut in Miami last year. Fellow Indy 500 winners Helio Castroneves and Ryan Hunter-Reay will be in action too, alongside reigning IndyCar champion Josef Newgarden.

Bernhard said: “Believe it or not I visited the Race Of Champions way back in 1989 when it came to the Nurburgring. That day I was just watching with my Dad but ever since I’ve been waiting for my chance to compete – and now that day has arrived! I’m really looking forward to racing on the famous ROC parallel track, and it will be a true privilege to take on such an amazing field of great drivers from all over the world who are all experts in their own fields. Bring it on…"

Kristoffersson added: “I’m thrilled to be competing at the Race Of Champions for the first time in Riyadh next week. I’ve long been a fan of the event and I’ve learned even more this year because my WRX team-mate Petter Solberg won’t stop talking about how great it is! Now I can finally experience ROC first-hand. It’s an honor to represent Sweden together with Joel Eriksson. Of course it will be a big challenge as a rookie, but I used to race touring cars so I hope that mix of experience can help me adapt quickly to all the different cars. Either way I look forward to putting on a great show for all the fans watching in the stadium and all over the world."

Now the event is heading to the Middle East for the first time to soak up the heat of Riyadh. Saudi motorsport fans – including women for the first time at an international event – have a chance to watch the speediest action the city has ever seen as many of the world’s greatest drivers push to the absolute limit on a brand new parallel track winding its way around the confines of the King Fahad International Stadium.

The Race Of Champions is run over two days: first comes the ROC Nations Cup (on Friday February 2) when drivers pair up in teams based on nationality – including the hosts Saudi Arabia – to bid for the title of ‘World’s Fastest Nation’. Then on Saturday February 3 it’s time for the Race Of Champions itself, when teamwork goes out of the window and it’s a flat-out battle for individual glory.

The competitors will take to the track in a stunning range of supercars that have been specially prepared for the event to test them to the absolute limit. Vehicles in action include the Vuhl 05 ROC Edition, Ariel Atom Cup, Xtreme Pickup, Whelen NASCAR, KTM X-Bow Comp R and the ROC Car. To prevail, drivers will have to master this mix of machinery that will put all their hard-earned skills to the test, forcing them to adapt their driving style as they make regular switches between cars.

ROC President Fredrik Johnsson said: “At the Race Of Champions we have always loved to take drivers from all sorts of different disciplines and throw them together in identical machinery to see who comes out on top. This year is no exception, and we have assembled another line-up of driving greats from all over the world.

“Our field now contains a mix of legends and current champions from Le Mans, IndyCar, Rally X, Formula 1, Touring Cars, NASCAR and more. If you’ve ever wondered which type of motorsport really has the best drivers of all, next week’s ROC Riyadh will give you the perfect chance to find out!"