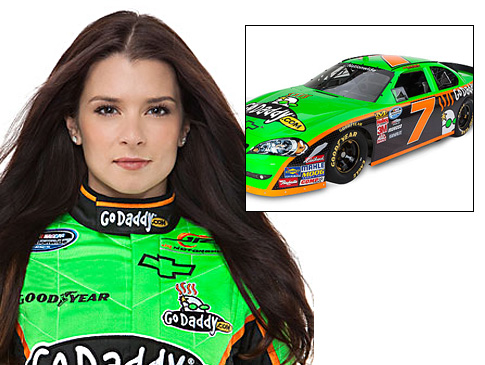 GoDaddy will sponsor Danica Patrick in the "upcoming 'Danica Double' that will close out her racing career." Patrick has "no ride yet for next month's Daytona 500 or the Indianapolis 500 in May, but she now has the financial backing to pull it off."

The company previously backed Patrick and followed her from IndyCar to NASCAR as a primary sponsor, but then "pulled out of racing after the 2015 season." GoDaddy CMO Barb Rechterman said, "Our goals are so well-aligned." AP

In an interview with ESPN.com, Patrick would not say whether her Daytona ride would be in one of the cars that has a guaranteed spot or whether she would have to vie for the four open spots and qualify her way into the 40-car field.

With Daytona 500 qualifying less a little more than three weeks away, Patrick seemed confident she could have a competitive ride. With all the major rides taken for Daytona, it appears Patrick will have to compete with a smaller, less-funded organization.

"We're definitely pretty close on all that stuff, especially on the NASCAR side," Patrick said. "We'll be announcing that as soon as we can. I wouldn't do it if it wasn't going to be a situation that would give me an opportunity to run up front and win the race."

As far as the Indianapolis 500, Patrick said "there have been a lot of cool options on the IndyCar side."

Patrick has had a busy offseason with her new business ventures, looking for sponsorship and rides. She also went through the breakup in late November with driver Ricky Stenhouse Jr. before dating Green Bay Packers quarterback Aaron Rodgers. She wouldn't talk about the reasons for the breakup.

"Obviously I like to keep my personal life, personal," she said. "But there are only kind thoughts and feelings and hoping the best for everyone. It's all about being in the best place that you can be for yourself."

This time around with GoDaddy, Patrick will symbolize the new core mission of the company that helped make her one of the world's most recognizable athletes.