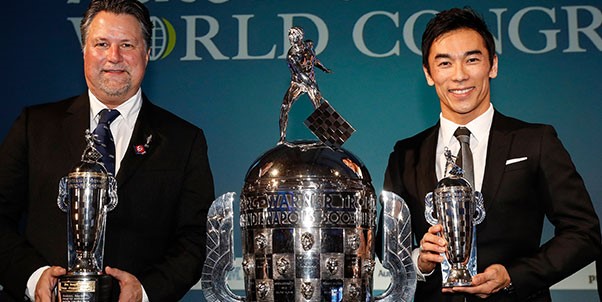 "I haven't decided if it's going to Indy or Japan," a smiling Sato said of the ultimate destination for his trophy. "Anywhere will do.

"(Being honored for winning the Indianapolis 500) just never stops, and we're only four months away from the next Indy 500. It's crazy."

The BorgWarner Championship trophies are unique replicas of the iconic Borg-Warner Trophy awarded to the winner of the Indianapolis 500 on Memorial Day weekend at Indianapolis Motor Speedway. The Baby Borg trophies are 14 inches high and weigh 5 pounds. The driver's trophy features a hand-crafted, three-dimensional sterling silver image of the winner, a duplicate of the image affixed to the full Borg-Warner Trophy that bears the likeness of every driver to win the race. The owner's trophy features a band of art deco race cars accented in gold to symbolize the importance of teamwork.

Sato, 40, from Tokyo, became the first Japanese driver to win the Indianapolis 500. He started fourth in the No. 26 Andretti Autosport Honda and held off three-time Indy 500 winner Helio Castroneves by just 0.2011 of a second at the finish of a captivating race May 28.

Legendary former Indy car driver Andretti earned his fifth Indianapolis 500 victory as a team owner, each with a different driver. Andretti also was the winning owner in 2005 with Dan Wheldon, 2007 with Dario Franchitti, 2014 with Ryan Hunter-Reay and 2016 with Alexander Rossi.

Andretti is tied with Chip Ganassi for second on the all-time Indianapolis 500 victory list among team owners. Four of Ganassi's wins came as owner of Chip Ganassi Racing, with the fifth as co-owner of Pat Patrick Racing in 1989. Roger Penske leads all owners with 16 victories in "The Greatest Spectacle in Racing."

The 102nd Indianapolis 500 presented by PennGrade Motor Oil is scheduled for May 27. The 2018 Verizon IndyCar Series season starts March 11 with the Firestone Grand Prix of St. Petersburg on the streets of St. Petersburg, Florida. Both races will be broadcast live on ABC and the Advance Auto Parts INDYCAR Radio Network.