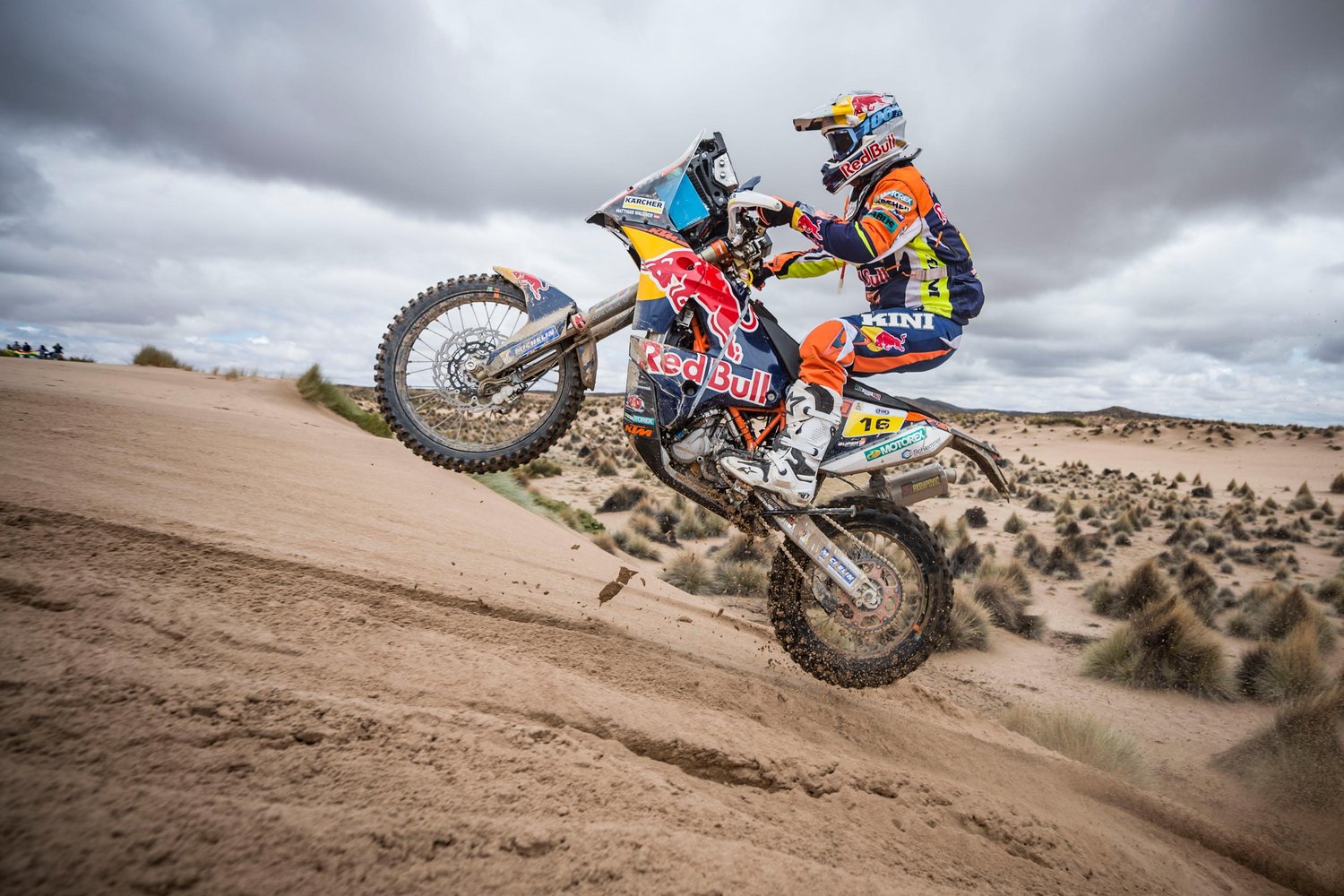 The Dakar contested its first stage in Argentina this year and also encountered much warmer temperatures than in recent days, with almost 40Â°C in the shade. The danger was that this could tire the competitors on the vast sandy terrain covering the first part of the special and then perhaps rob them of their lucidity when tackling the last part, in which tricky navigation through river beds had pride of place…

The bike race has probably been decided in the river beds of Belen. When they strayed almost 10 km from the right track for more than 50 minutes, Kevin Benavides, Toby Price, Antoine Meo, Stefan Svitko, Joan Barreda and Ricky Brabec perhaps lost all hope of overall victory in Cordoba.

The leader of the general standings this morning, Adrien Van Beveren, most definitely has: he was set to make significant gains but exited the rally after a high-speed fall just three kilometers from the finishing line. Matthias Walkner, the sole survivor of the day’s upheavals, obtained a big stage victory and now leads his nearest pursuer by 39 minutes in the general standings.

The car race is still dominated by Carlos Sainz, in spite of another fine performance from Stephane Peterhansel who beat Giniel De Villiers.

The Frenchman has taken advantage of Nasser Al-Attiyah’s mechanical problems to grab second place in the general standings. In the quad race, for the arrival of the rally in his home country, Nicolas Cavigliasso pulled out all the stops to obtain his second stage victory, ahead of his countryman Jeremias Gonzalez Ferioli. Ignacio Casale still dominates the general standings. In the truck category, Ton Van Genugten led the stage throughout the day before finally crossing the finishing line with a lead of 33 seconds over the stage’s local hero Federico Villagra, to obtain his second special triumph on the rally.

In the shadow of the four official Peugeots that took starter’s orders for the 40th Dakar, Khalid Al Qassimi is also driving a 3008 Maxi. Unknown to the general public, this driver from the United Arab Emirates is nonetheless a regular on the WRC circuit as well as in the dunes of his native region. This has obviously been behind his desire to tackle the Dakar for the second consecutive year. He has made significant progress with several top 10 finishes in particular. His 4th place today confirmed the skills of the driver from the UAE, who has climbed to a fine 7th place in the general standings.

The Benavides brothers had high hopes at the start in Salta, their home town. Having led for the first 242 kilometers of the stage with a considerable lead over his rivals, Kevin Benavides bombed spectacularly by following the wrong river bed on the last part of the special. Instead of grabbing a victory which seemed to be there for the taking and climbing to the top of the general standings, the Argentinean now trails the new leader of the provisional classification by 41 minutes this evening. As for his brother Luciano, he was in the process of securing his first top 10 finish on the Dakar, but fell heavily and will not complete his first attempt at the rally…

Due to a broken rear triangle 45 km from the finish, Nasser Al-Attiyah had to finish the special at a crawl. The Toyota driver completed the stage at an average speed of 56 kmph. Over the same distance, Stephane Peterhansel averaged 100 kmph…

Quotes of the day

Toby Price: “It’s one of those days you want to forget. A bit tough, but that's the way it is. I've just got to try and see what the rest of the week will bring now. For us it’s pretty much done. We’ll just keep plugging away each day and see what happens. You never know, but it’s not looking too good… That’s the way it is".

The leader of the general standings, Carlos Sainz Sr., is clearly counting down the days that separate him from a second victory on the Dakar…

“It was very tricky and very difficult. I’m very happy with this stage, especially on the second part where we tried a little bit harder and it was good. I’m very happy. Tomorrow will be another day. I’ll enjoy this one and then tomorrow’s another day".