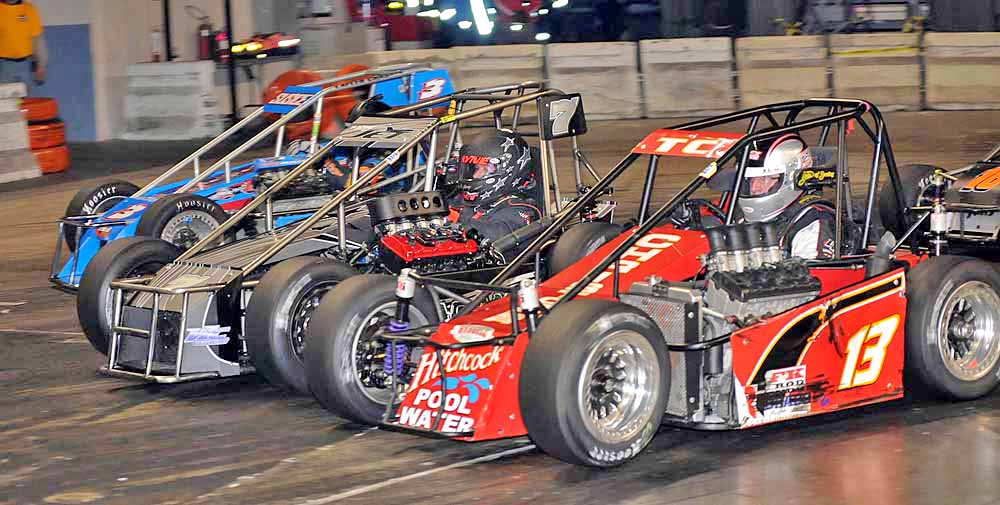 In recent months more new cars have been built and race proven machines stripped and re-engineered than ever before. Every team that doesn’t own a Laffler Chassis, winner of the last three series titles, is out to knock them off the top of the hill.

Heading the list is a new car being built at DART Engineering’s shop in Pipersville, Pa. by BJâ€ˆMcDonald. The car will be driven by Canadian Super Modifiedâ€ˆstandout Mike Lichty.

Lichty, a past TQ Midget winner of Indoor races with the Series, will replace his older, yet tested tough TQ Midget, with the new DART car when he makes his debut with it in Allentown.

The former ISMA champion will then held to Atlantic City’s Boardwalk Hall for the 16th annual NAPA Know How weekend on Friday and Saturday, January 26th and 27th. In his only start with the series last year, Lichty drove a Lou Cicconi owned Laffler Chassis to a fifth place finish at the series finale in Atlantic City so he knows what a Laffler chassis has to offer.

Tim Nye of Troutman, N.C. has built three new cars for the Indoor Auto Racing Series. Two of them will be driven by the Catalano racing brothers, Tommy and Timmy. Nye also has built a new car for his brother Shawn. The three new cars will be powered by 750cc engines while Tim Nye’s older car will continue to go to post with a 600cc motor.

Mark Lafler of Ransomville, N.Y. will be well prepared for the new the competition. Lafler has built nearly 24 cars that have been driven to victory and four Indoor Auto Racing Series championships, three by Lafler’s ‘house car’ driver Erick Rudolph and one last year by Ryan Flores, a Lafler customer. On his route to the title last year, Flores swept both nights in Allentown and Rudolph won the series finale in Atlantic City and the season opener in Trenton.

Lafler will have two of his latest design cars at Allentown, one for Rudolph and another for Joey Payne, who has won two Atlantic City Gamblers’ Classics. While the two new cars are updated models, Lafler has said that the differences in his cars from year to year are subtle, and sometimes, not necessarily desirable, he’s always looking for something new and is not afraid to experiment.

Lou Cicconi’s No. 75, a car designed for the 2016 series by Super Modified championship car owner/builder John Bodnar, will be driven this year by Tim Buckwalter. This time, Cicconi, has had Clyde Booth, another noted Supermodified builder, revamp the car. The team made its debut outdoors at Wall Stadium’s Turkey Derby at the end of November. It left the track with more design changes planned prior to the indoor opener.

Also in this category is Andrew Krause, the asphalt Modified standout from Holmdel, N.J. Krause originally purchased a Drinan car that has been rebuilt at least twice. He’s got more alterations planned for this year’s competition.

Another strong New Jersey entry will come from Anthony Sesely, a three time winner in Atlantic City. Sesely’s No. 16 will again be his race proven Hyper Micro Sprint entry powered by a 600cc engine, rather than a 750. Dirt Sprint car racer Brett Hichalski of Penndel, Pa. will again be following Sesely’s lead using a Hyper with a 600.

Indoor series regulars from New York state and New England are excited about the first ever series event to be held inside Albany, N.Y.’s Times Union Center. This event, set for Friday and Saturday, February 9th and 10th, will be the series finale.

Always exciting Andy Jankowiak of Buffalo, N.Y. will be returning to run the entire series with a car he built and debuted last year in the series finale. The car was blindingly fast in Atlantic City last year, but engine issues hampered his effort.

“I cut the car apart once after I built it new and cut it apart after last year’s races," Jankowiak said. “It will be a faster race car this winter."

Jankowiak’s former ride, the Trey Hoddick home-built No. 49, will be returning with Scott Kreutter as the lead driver. Kreutter was teamed last year with Ted Christopher, an eight time indoor series winner who died in a plane crash in September.

While the new cars and redesigned machines might seem to be favored, two top New Englanders will be driving tried and true machines.

Ryan Preece of Berlin, Conn. will be driving the same car that was designed and built by Donnie Preece and the late Ted Christopher. It will be repainted white and will carry the same No. 6 that Preece has run in the Ed Partridge NASCAR Whelen Modified Touring Series.

Keith Rocco of Wallingford, Conn. will be driving the car formerly driven by Ryan Preece. Rocco has never raced a TQ Midget indoors. The car was originally built by DARTâ€ˆEngineering, but Preece made many changes to it in recent years.

Chad Jones of Quakertown, Pa. was so happy with the performance of his Shaw built TQ Midget for New Hampshire last year that’s he’s purchased a second one which will act as either a back-up ride, or one for another driver this season.

Other drivers are standing pat with existing cars.

Mike Maresca of Hannawra Falls, N.Y. will be driving his Lafler chassis No. 7. Maresca ran this car for the first time last year, at Atlantic City where he finished 13th. Maresca will have a teammate in Central New York car dealer and fellow DIRTcar series driver Billy Whittaker, who will drive a second Maresca owned Lafler.

A field of over 50 TQ Midgets will do battle at the Ironton Telephone sponsored Allentown events. The schedule calls for two complete shows of TQ racing starting at 7:30 p.m. on Friday and 7 p.m. on Saturday. Champ Karts will be racing in a complete show on Friday night along with the TQs, with the Slingshots joining them on Saturday night’s card.

The series moves next to the NAPAâ€ˆAuto Parts Indoor Auto Racing Weekend in Atlantic City on January 26th and 27th. For tickets, contact Ticketmaster, the Boardwalk Hall Box Office, or the Area Auto Racing News office at 609-888-3618.