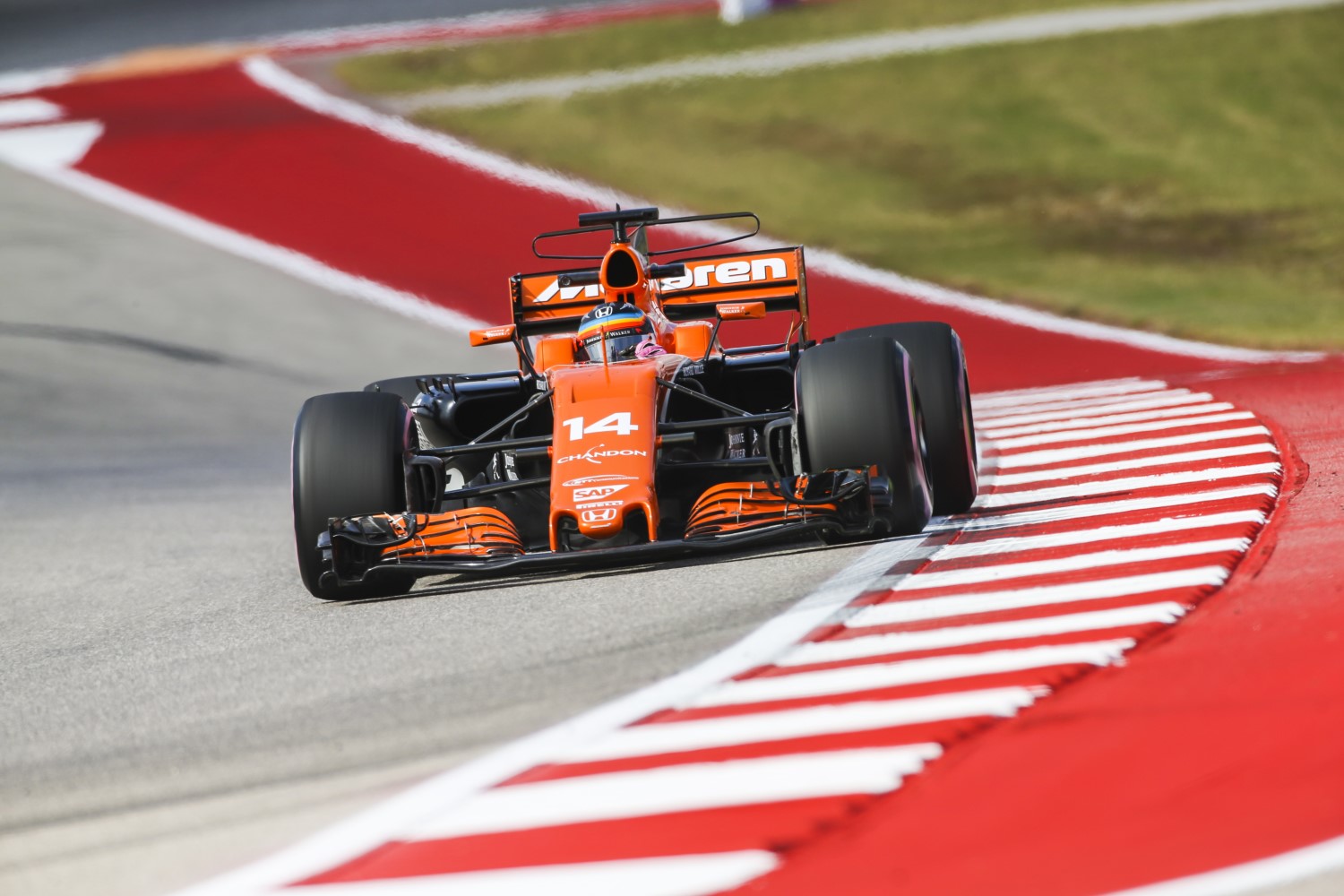 (GMM) Zak Brown has admitted it was "difficult" for McLaren to convince sponsors to join the British team amid its Honda crisis.

After three years with insufficient power and reliability, McLaren has dumped Honda and will use customer Renault power for 2018.

"Fortunately, I have experience in this area but I knew that during the season, you wouldn't find any new partners when you have the problems we had," he told Auto Motor und Sport.

"We could not sell to potential sponsors the story that things will get better next year. That was one of the reasons why we needed a new engine supplier," Brawn admitted.

"So I can say now that our discussions with new sponsors have gone very well," he added.

Raikkonen not judging Liberty Media yet

(GMM) Kimi Raikkonen says he will not judge Liberty Media until the next generation of F1 cars emerges in a few years' time.

Already, top teams are threatening to quit the sport and complaining about declining revenue, even though new owner Liberty says more spectators watched F1 in 2017.

Ferrari driver Raikkonen said: "They are trying to make it better, easier to follow and more involving the public.

"But it will only be in a few years, when the new regulations are in force (in 2021), that we will really see the impact of their arrival," he is quoted by Auto Hebdo.

"I think they're putting a lot of effort in, listening to everyone and asking the right questions. I think we'll see if it has been good when we get the new cars," Raikkonen added.

As the 2017 season ended and Niki Lauda retired as a television pundit, a dark cloud hung over the future of German broadcaster RTL's F1 deal.

But Bild newspaper now reports that talks between RTL and Liberty Media are now essentially done.

It is claimed that the 2018 season opener from Melbourne will definitely be shown free-to-air within Germany.

But a RTL spokesman insisted: "I cannot confirm that. There is no contract. We are not ready yet."

However, it is also claimed that former F1 drivers Nico Rosberg and Timo Glock will alternate at grands prix to replace the retiring F1 pundit Lauda.

Even Ferrari partnership 'has limits' – Brawn

(GMM) Ross Brawn has ruled out scrapping F1's plans to replace the current 'power units' after 2020.

The now F1 sporting boss was once Ferrari's highly successful technical director, but now he is dealing with the Italian marque's threat to quit.

"I was pretty surprised by these reactions," he told Auto Bild, also referring to Mercedes' similar quit threat.

"I was in some of the meetings, and I thought the direction was clear. Everyone agreed unanimously on the new goals that the engines should achieve, and we based the new rules on that."

But Brawn said the disagreements are not terminal.

"It's like a restaurant where some like the appetizer but not the main course, and vice versa," said the Briton.

"That's why there are new discussions taking place now. If the manufacturers offer better solutions we are open, but staying with the current power units is not an option," he insisted.

He said that's because "60 to 70 per cent" of all F1 fans want louder and more spectacular engines, while new manufacturers will not enter the sport unless there is change.

"So it's a matter of what Ferrari can accept, and what we can accept. We want to find solutions that keep everyone in formula one, and above all we don't want to lose any iconic teams.

"They are an important part of formula one and we must respect and listen to them," Brawn added.

(GMM) Nico Hulkenberg says he is happy rather than worried now that Carlos Sainz Jr. is his teammate at Renault.

This year, German Hulkenberg was teamed up at the French team with Jolyon Palmer, until the Briton was ousted and replaced with Spaniard Sainz.

Hulkenberg says that overall, he is "satisfied" with how 2017 went for Renault.

And: "In terms of driving it was my best season so far," said the 30-year-old. "As a driver I've never been better. The faster cars are more suited to me.

"I can drive at the limit and that's also more fun. The tires have become much better. Everything went in the right direction," Hulkenberg told Auto Bild.

However, Hulkenberg is now paired with a much more challenging teammate, with some calling Sainz's arrival at Renault as a 'wake-up call'.

But Hulkenberg said: "It was completely clear that Carlos would be closer. At the end of the day, we are all only cooking with water.

"Sainz is talented and fast. We are only at the beginning of our team relationship, but Carlos is important for the development of the team."

As for the future, Hulkenberg gave the first sign that he intends to stay at Renault beyond the end of his contract late next year.

Asked if he will be fighting against Sainz for the 2020 title, he smiled: "I hope so!"

Hamilton hopes for competitive McLaren in '18

Reigning World Champion Lewis Hamilton says he hopes former team McLaren will be able to compete among the leading group in 2018, having ditched Honda power for Renault.

Hamilton has taken 41 wins and three championships in his five years at Mercedes, while McLaren has struggled, failing to take a victory, its plight accentuated by recent struggles with Honda.

McLaren has abandoned its Honda collaboration in order to link up with Renault, whose engines powered Red Bull to three wins and third place in the Constructors' Championship in 2017.

Hamilton is optimistic that he can fight with his former team, and ex-team-mate Fernando Alonso, at the sharp end of the pack in 2018.

"I had a great battle with Fernando towards the end of the season [in Mexico]," said Hamilton, when asked about McLaren's prospects by GPUpdate.net.

"I would love to have more battles with him on a much more level playground, as I think they've had such a difficult time.

"There's just a natural place in my heart for them because I achieved a huge amount with them.

"It's a fantastic team with incredible history, I'm incredibly proud of what Ron [Dennis] did with that team, and it doesn't matter who took over [as] for me it's always Ron's team.

McLaren finished ninth in this year's Constructors' Championship, with a best race result of sixth.

Ferrari's Sebastian Vettel says the aftermath of the rancorous Azerbaijan Grand Prix left him with the "worst feeling" of 2017, after ultimately missing out on the Formula 1 title.

Preparing for a restart, Vettel hit the rear of Lewis Hamilton's car, before pulling alongside his rival, gesticulating, and making side-on-side contact.

Vettel was issued with a 10-second stop-and-go penalty for the incident, denying him the opportunity to triumph when Hamilton was compromised by a loose headrest.

Having led the standings through the opening half of the campaign, Vettel's title bid unraveled amid the lap-one crash in Singapore, and engine issues in Malaysia and Japan.

Vettel, though, pinpointed Azerbaijan as the lowest moment.

"The worst feeling I had [was] after Baku, just because I think I sort of ruined the race with something unnecessary, so I struggled with that," said Vettel.

"Then you would probably refer to other races such as Singapore, Japan, but then in Singapore, from my point of view that's racing.

"I thought about it a lot on Sunday night [after the race] and it wasn't easy to put it behind [me], but then, what do you do?

"It's the same in Japan… there's a saying – I don't know if I'll get the literal translation right – that you can't hold on to something that's not in your hands, and that's a good fit.

"Sometimes things are not in your hands and you have to move forward.

"You struggle a lot more in life with things that you messed up rather than got messed up for you, if you see what I mean."

Vettel's title hopes were mathematically extinguished with two rounds to go, after Hamilton amassed a sufficient buffer to clinch the crown at the Mexican Grand Prix.

Vettel feels that losing his chance earlier in the campaign, rather than at the final round of the season, made the defeat easier to digest.

"I think obviously we lost the title with a couple of races to go so I think we had races to focus on and refocus again," he said, having won in Brazil and taken a podium finish in Abu Dhabi.

"So from that [point] it was a bit easier because there were things to do other than losing it maybe in the last race.

"Overall it's been a positive year, we've had a very strong car, strong package, if you don't finish first obviously it's always a missed opportunity, but that's how it was."