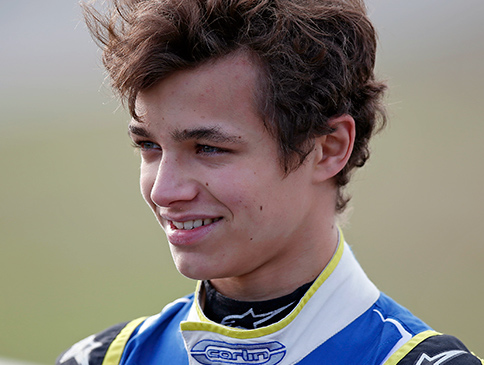 Lando Norris grabbed provisional pole position for the Formula 3 Macau Grand Prix – FIA F3 World Cup on Friday, as he delivered two sensational laps in the closing minutes of a session that was interrupted by four red flags.

The Carlin driver had been struggling to find a good balance on used tires in the early part of the session, and had elected to fit new rubber on the left side of his car just before morning pace-setter Sergio Sette Samara crashed heavily at Fishermen’s Bend causing a lengthy red flag delay.

With 11 minutes of the session remaining at the restart, Norris focused on laying down the benchmark – which he did with two consecutive laps that were quicker than anyone else managed.

In the end, his best effort of 2m11.570s was 0.912 seconds ahead of Pedro Piquet – and helped lift Norris’ spirits after a tiring series of flights from Brazil following the cancellation of a planned McLaren F1 tire test.

“We grained the tires pretty badly early on, so I felt I was struggling initially," said the European F3 champion. “But as soon as we put the new tires on it was a chunk better. I didn’t have to fight the car.

“It was a good end to the session, but 90 percent of the time people improve in second qualifying anyway – so we are not done yet."

SJM Theodore Racing by PREMA’s Maximilian Gunther, who had topped the times prior to the Sette Camara red flag, ended up third, ahead of Motopark with VEB duo Daniel Ticktum and Joel Eriksson.

The first red flag of the session was brought out when DRAGON (Ryuji Kumita) of B-Max Racing Team crashed at San Francisco Bend in the first minutes. Shortly after the restart, Alex Palou hit the wall at Paiol and had to stop on track, forcing another stoppage.

The final red flag caused when Carlin’s Jehan Daruvala stopped after hitting the wall at San Francisco brought the session to a premature end.