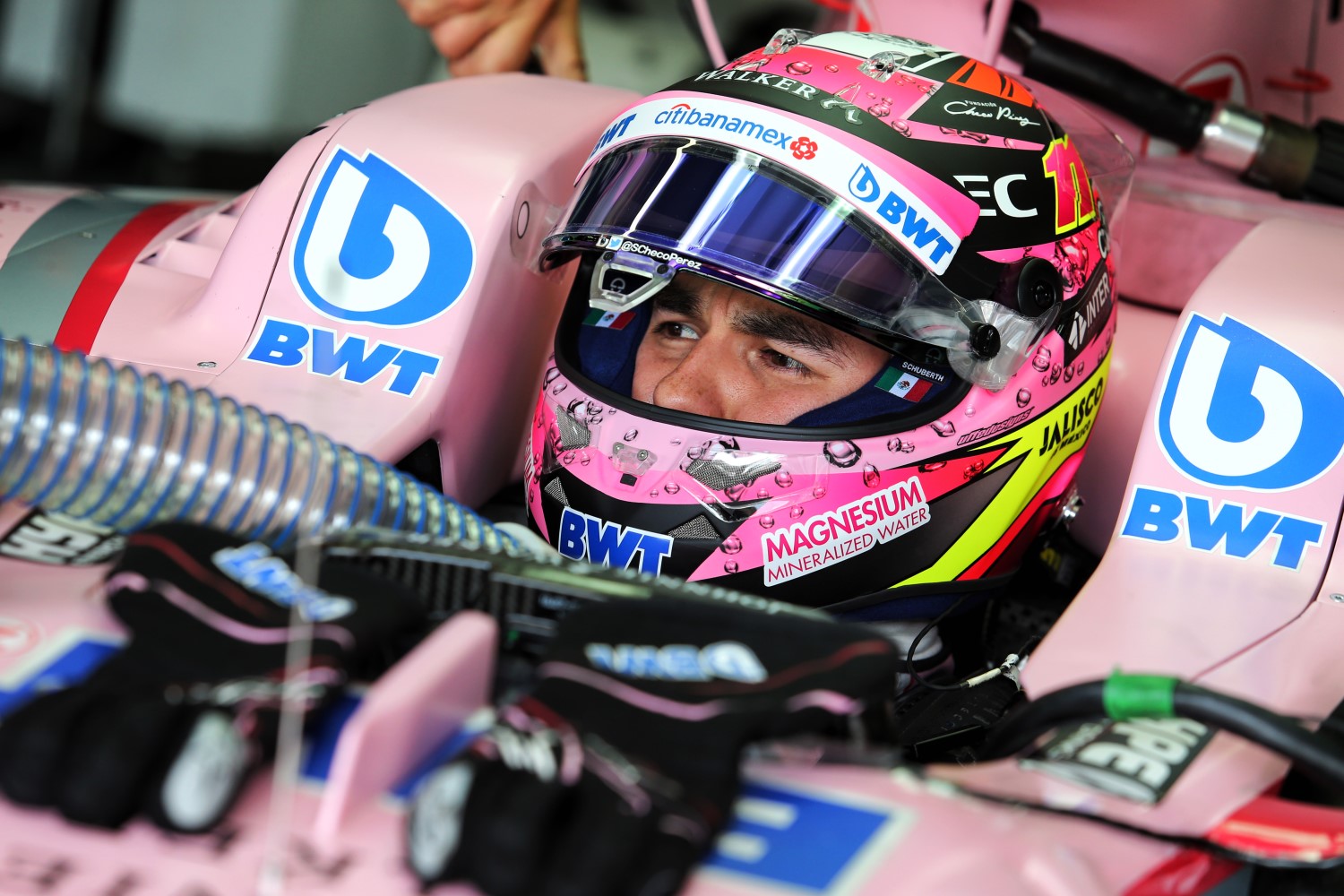 Points in last two races to cost Force India money
(GMM) Force India is in the odd position of not particularly wanting to do well in Brazil and Abu Dhabi.

The Silverstone based team has admirably wrapped up fourth place in the constructors' world championship with two races to spare.

And given the fact Force India has among the smallest budgets in the sport, driver Esteban Ocon thinks the team could even be a championship challenger in a 'budget cap' era.

"Honestly if everyone had the same budget I think some people would be surprised what Force India can achieve," said the Frenchman.

But until that happens, the team is counting its pennies, and scoring points in Brazil and Abu Dhabi will actually cost Force India money.

Official FIA entries for a subsequent season cost teams a flat fee plus $5500 per point.

The German newsmagazine Focus reports that the German company, having sponsored McLaren and most recently Mercedes for decades, is switching instead to Formula E.

"Of course F1 is the pinnacle of racing," said new CEO Mark Langer, "but Formula E is innovative and sustainable.

"Racing in the big cities appeals to a younger audience and opens up new possibilities."

Langer denied that leaving F1 is simply a cost-cutting decision.

"After many years in formula one – actually since Jochen Mass in the 70s – we've been wondering what's the next thing? What's next for us?" he admitted.

(GMM) Nico Rosberg does not think Sebastian Vettel and Ferrari are ready to topple Mercedes in F1.

The two top teams battled for the title this year, but ultimately Lewis Hamilton won the championship with two races to spare.

And outgoing world champion Rosberg told the German source T-Online: "I do not think Vettel will have a better chance next year.

"This year, the opportunity for him to win the championship was huge, but Mercedes as a whole team is just so strong.

"So I think the gap between them and Ferrari could even get bigger in the coming season," former Mercedes driver Rosberg added.

"But let's see. Even Mercedes has made mistakes, and Sebastian has to hope for more of that and to be there at the right moment," the retired German said.

Vettel admits Mercedes will be 'tough to beat'

Ferrari driver Sebastian Vettel has admitted that Mercedes will be "tough to beat" at the Brazilian Grand Prix, given the pace it displayed during practice.

Hamilton's benchmark of 1:09.202, set in FP1, was some half a second quicker than Red Bull's Daniel Ricciardo managed in FP2, and a further tenth clear of Vettel.

While he expects a "very close" fight with Red Bull this weekend, Vettel feels it is unlikely that Ferrari will be able to challenge Mercedes for pole position or victory.

"Mercedes looked very strong, so I think they are a bit ahead, both of them [Hamilton and Bottas]," commented Vettel, reflecting on the first day of running.

"I think it's very close between us and Red Bull.

"I think we can fine tune the balance and that should help us, but it will be tough to beat Mercedes as they look very, very quick in all conditions, and on all tires."

On his return to the cockpit after missing out on the title, he said: "It was nice to get a lot of laps today, it's more quiet on track than off track, so I enjoy that."

"Mercedes are pretty quick on high fuel, we seemed to be quick on low fuel, but I think they'll have a bit more on low fuel tomorrow," he commented.

"But relative to Ferrari I think we had a pretty good day."

Vettel's teammate, Kimi Raikkonen, finished third fastest in FP1, but dropped to sixth in FP2, adrift of the frontrunners, after suffering from tire-related vibrations.

His rival Lewis Hamilton wrapped up the championship two weeks ago in Mexico, and Ferrari's Vettel admits it was "very" disappointing.

But he told La Gazzetta dello Sport: "It's already time to turn the page.

"There are still two races where we will think about 2018. And there is still the second place (battle with Valtteri Bottas) to defend and 50 points still available," he added.

After the disappointing championship defeat, Ferrari president Sergio Marchionne said some of the reason was car reliability, and another part was due to driver errors.

Vettel, referring to when he controversially crashed into Lewis Hamilton, responded: "I was really wrong only in Baku. The rest of the season went well enough."

(GMM) New supremo Chase Carey has played down the tension between the sport's owners Liberty Media and F1's most famous team Ferrari.

With Liberty wanting a different engine formula and also a budget cap for 2021, Ferrari president Sergio Marchionne responded by threatening to quit if the sport's new owners overly denigrate F1.

But Carey told La Gazzetta dello Sport: "There are no real differences between Ferrari's views and ours.

"Formula one is unique and the teams must be able to build original cars in the engine and chassis," he added.

However, the American said he is determined to implement what he considers to be important reforms for F1.

"We want more teams to fight for victory, and for success to depend upon how they spend money, not on how much money they spend," said Carey.

"Uncertainty about the outcome of a race is fundamental to making any category of motor sport attractive for spectators."

McLaren's Stoffel Vandoorne enthused over the team's long-run performance during practice for the Brazilian Grand Prix, believing it to be one of its strongest of 2017.

McLaren has struggled for reliability and speed this year, ostensibly due to Honda's weaknesses, limiting Vandoorne to only three points finishes, achieved in Hungary, Singapore and Malaysia.

Despite finishing a low-key 13th during FP2 at Interlagos, via a spin through the second part of the Senna S, Vandoorne was encouraged by the pace of his MCL32.

"We've brought a new upgraded aero package for my car this weekend so we started FP1 learning about and understanding that, which generally went very well," he said.

"FP2 was maybe a little bit more difficult – we tried some different settings and made some changes that weren't necessarily in the right direction.

"However, our long-run performance was extremely positive – one of our strongest of the year so far I would say.

"Everything is looking good for the race. We still need to put everything together tomorrow, but a good qualifying would put us in a strong position for Sunday."

Fernando Alonso, meanwhile, rounded out the top 10 in both sessions, but was left frustrated by a sequence of minor setbacks, hindering his run plan.

"We had some problems in the first session, then a power unit pressure issue in the second session. We lost some valuable track time, and in the end we didn't manage to complete our program.

"We tried to carry out the priority items on our run-plan, and we're more or less happy with the outcome."

George Russell hailed a "huge step up" as he made his Formula 1 weekend debut during practice for the Brazilian Grand Prix at Interlagos on Friday.

Russell, 19, joined Mercedes at the start of the year and piloted the W08 for both days of the in-season Hungaroring, and went on to clinch the GP3 title with a round to spare.

Earlier this week, Force India announced that it would field Russell in FP1 in Brazil and Abu Dhabi, and the Briton got behind the wheel of the VJM10 on Friday morning, in place of Sergio Pérez.

"This is something I have been working towards for a long time and even though it feels normal right now, it's a surreal feeling to know I have been driving in a race weekend," said Russell.

"It's a huge step up for me, but I have been prepared as well as I could be: I have done days in the simulator with both Mercedes and Force India.

"I feel that, after my days at the test in Budapest, this was the next step.

"I didn't know the car or the circuit and I wanted to learn as much as I could to review and take to Abu Dhabi, a track I know."

Russell explained that dealing with traffic on the relatively short circuit proved one of the biggest challenges during the latter stages of the session.

"We did some aero running early in the session, then some proper runs to change the set-up to my liking," he said.

"All tire compounds felt good and I got up to speed quickly. I was very happy with the car.

"The final half of the session was quite difficult: I was still doing fast laps while others were doing longer runs: it's a short circuit and it's difficult to find space.

"You end up compromising your warm-up procedures because you're looking in the mirrors all the time, but it's something from which I learnt a lot."

Lewis Hamilton and Valtteri Bottas expressed optimism over Mercedes' start to the Brazilian Grand Prix after the pair finished 1-2 in both practice sessions on Friday.

Having wrapped up both titles, Hamilton and Mercedes vowed to push on across the final two rounds, and comfortably led the way at Interlagos.

Hamilton clocked the quickest ever lap of the circuit during FP1, posting a 1:09.202, and retained his position in FP2, despite his best time being over three-tenths off his earlier benchmark.

"It's been a good day," said Hamilton, who claimed victory in last year's rain-affected race at Interlagos.

"It was pretty exciting to come to the track with the cars being so much faster this year.

"It's physically more demanding than before which is great and it's obviously quite warm out there today.

"We got through the long runs and the short runs; unfortunately, the tires don't really last very long, so you only get one or two laps on the short runs.

"Overall, we got through what we needed to do.

"We're in a decent position, but I think it could be quite close."

Bottas, meanwhile, believes Mercedes has a "good starting point" with its W08 for the remainder of the weekend.

"Initially in FP1 we did some aero tests, looking at some things we can improve for next year, and we now have some data to analyze from that," said Bottas, who trails Sebastian Vettel by 15 points.

"Otherwise, I think both the short runs and the long runs in both sessions looked positive for us as a team, so we have a good starting point for the weekend.

"Still, we were a little bit struggling to get the set-up right for each corner of the circuit.

"However, I was really enjoying this track and I'm looking forward to the weekend."