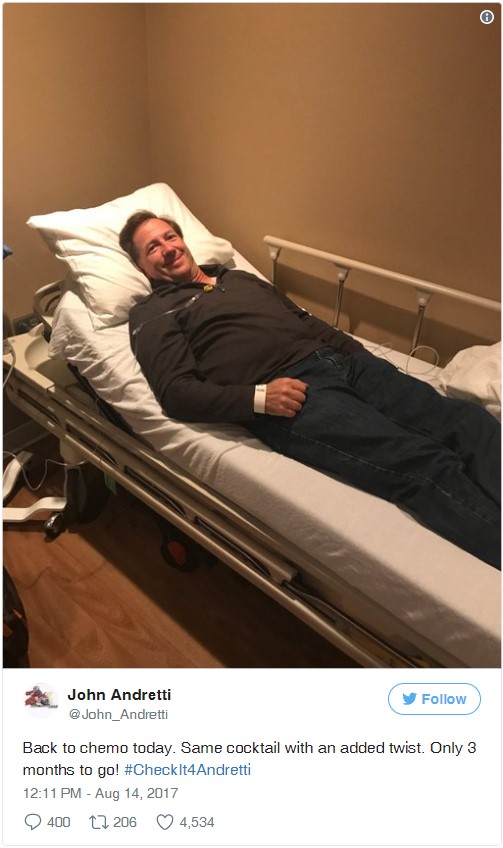 UPDATE Former IndyCar and NASCAR driver John Andretti tweeted Monday that he is officially finished with chemo treatments for the foreseeable future.

He tweeted: "I am officially off the #chemocoaster for now. Hope I never get to ride it again. Please #CheckIt4Andretti."

Andretti, the nephew of IndyCar legend Mario Andretti and son of Aldo, announced in April he had been diagnosed with Stage 4 colon cancer.

The cancer also spread to his liver and he had concerns about it spreading to his spleen and gallbladder.

Andretti tweeted in June that his spleen and gallbladder were clean and that he would be on chemo for at least three more months.

08/15/17 John Andretti has started another round of chemotherapy.

The former NASCAR and IndyCar driver used Twitter on Monday to provide an update on his fight against colon cancer: "Same cocktail with an added twist. Only 3 months to go."

The 54-year-old Andretti made his diagnosis public in early May and has relied on social media to keep fans abreast of his condition.

In late June, he Tweeted that doctors found that his spleen and gall bladder were cancer free. Andretti continues to encourage others to get preventative screenings.

Andretti started 49 consecutive IndyCar races from 1990-92 before moving to NASCAR, where he made 29 or more starts every year from 1994-2003. He was the first driver to attempt the Memorial Day double. AP news/CTV News