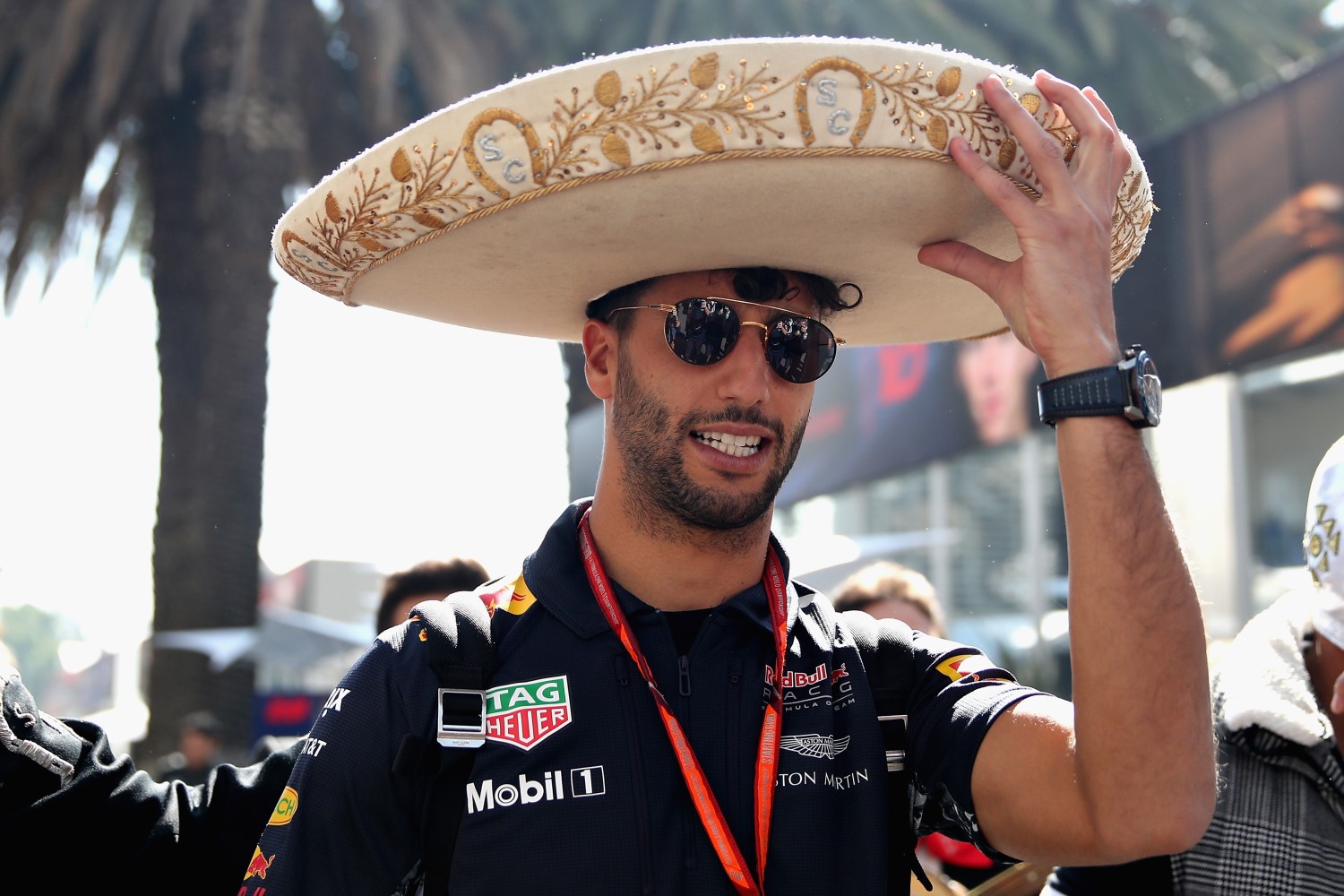 Red Bull can wait for Ricciardo decision – Horner
(GMM) Red Bull is prepared to wait for Daniel Ricciardo to make his decision about staying with the team beyond 2018.

The energy drink company's premier F1 team has locked down Max Verstappen with a new contract until 2020, prompting some to think that Australian Ricciardo may now look for an alternative.

Indeed, Dr Helmut Marko, the Red Bull driver manager, confirmed that the 28-year-old is "on the market".

But team boss Christian Horner sounds relaxed, saying that even if Ricciardo decides to leave, Red Bull's ability to pull Carlos Sainz back from the works Renault team is a "safety net".

Horner said of Ricciardo: "At 28, his next decision is a very important one. So he will take time to make it right.

"But we have also clearly told him that we want him on the team," Horner is quoted by Salzburger Nachrichten newspaper.

"Even if the decision takes him six months, that's fine," he added.

(GMM) Mercedes is promising to build a car more suitable for Valtteri Bottas' driving style in 2018.

That is the claim of team chairman and co-owner Niki Lauda, who thinks he understands why the gap between the Finn and 2017 champion Lewis Hamilton gradually widened this year.

"At the start, the car was suitable for both drivers," the F1 legend told Finnish broadcaster C More.

"But through development it became more suitable for Lewis' driving style."

Lauda said that while Bottas, 28, tried to adapt his style to suit the latest iteration of Mercedes' 2017 car, it is now up to the team to correct the situation.

"The reason for what happened is more our fault than Valtteri's," said Lauda.

"The car for the coming season will suit not only Lewis' but also Valtteri's driving style," he promised.

(GMM) F1 legend Emerson Fittipaldi thinks Fernando Alonso could have a title-winning car on his hands next year.

The once-great British team is switching from Honda to Renault power for 2018, and Fittipaldi thinks that could be the boost Spaniard Alonso is needing.

"I think it will be much better," Fittipaldi, a two-time world champion of the 70s, told AS newspaper.

"I think Fernando is the best and I also think McLaren has a great car," said the 70-year-old Brazilian, who was at the Mexican grand prix. "As Alonso said the other day, it is a great car in the corners.

"So if they continue with that quality of chassis and aerodynamics with the Renault engine next year, they can fight for podiums, victories and even the title," Fittipaldi predicted.

"He is in a good place with Renault and I see him going step by step to the top," he said.

"The future is his along with drivers like Verstappen," Fittipaldi added.

(GMM) Ferrari too easily slips into a "crisis" that it then finds difficult to escape from.

That is the view of former top Ferrari engineer Toni Cuquerella, as he assessed the recent collapse of Sebastian Vettel's 2017 title challenge.

"Ferrari were much more competitive than in previous years," he wrote in El Pais newspaper.

"Ferrari had a better car than Mercedes in five of the 18 grands prix," Cuquerella added.

"It was a good year and they should be happy. But as ever at Ferrari, two races with poor results meant the beginning of a crisis. And Mercedes took great advantage of that," he said.

Cuquerella thinks the challenge for Ferrari now is to put the 'crisis' behind it and come out with a strong package from the beginning in 2018.

However, "Ferrari struggles to get out of its crises," said the Spaniard. "Meanwhile, others like Red Bull or McLaren can get to that level of solidarity and confidence next year.

"This year, the fastest team and the fastest driver won, but the trend indicates that this dominance will not necessarily continue.

"The next title could be won by a team that does not always have the best car," he added.

(GMM) Fernando Alonso has sided with F1 race director Charlie Whiting over the issue of getting rid of the circuits' asphalt run-off zones.

Drivers abusing 'track limits' has been a hot topic in recent days, but Max Verstappen – at the center of a major controversy after the US grand prix – thinks he has a simple solution.

"Let's put grass or gravel so that you cannot cut over the curbs," he said.

"For example in Suzuka I don't think we have these issues, do we? I think the solution is very simple," the 20-year-old Red Bull driver added.

Plenty of drivers agree with Verstappen, but top FIA official Whiting told them in the Mexico GP briefing that there are problems with simply adding more gravel or grass.

"I think races like the Porsche Cup or Formula 2 would put rubbish all over the track," veteran F1 driver Alonso agreed.

"It would be incredibly difficult for us to have a clean track for when we run.

"I think we also have to consider that formula one is not the only series that runs on these permanent tracks — there is also MotoGP, and they need completely different safety features.

"I think it's incredibly difficult to reconcile everything," Alonso added.

(GMM) Mercedes has come out in opposition to Liberty Media's proposed new engine formula for 2021.

On Tuesday, the German marque as well as Ferrari, Renault, Honda and other manufacturers including Porsche got together to hear the new F1 owner's plans for the next-generation engine.

Liberty wants the 2021 engine to be louder, cheaper, simpler and provide a more level playing field.

It will be based on the same 1.6 liter V6 base, but without the controversial MGU-H, with higher revs, and with standard batteries and a more "prescriptive design".

But Germany's Auto Bild claims that Ferrari, Mercedes and Renault are already opposed to the Liberty vision, which will now be discussed at a series of follow-up meetings.

"But it means a completely new development that will mean we are working on two engines at the same time between 2018 and 2020," he added.

However, Red Bull is happy.

"An engine like that is good for us," said Dr Helmut Marko.

But it appears that existing manufacturers like Mercedes are not ready to give up the argument for engines that are more like the current 'power units'.

"It is important to define all together what formula one should be in 2021, not just from the point of view of the engine. What we have is the starting point of a dialogue rather than something we have agreed to.

"Certain things are right, but it's not quite there," Wolff added.

However, he insisted that Mercedes is not necessarily shaping up for war with Liberty.

"I just want to make it clear that there are different opinions," said the Austrian. "It was a presentation by F1's management, we will now wait and see what is put on the table next week and start a dialogue from there."

Sauber and Force India remained at the Autodromo Hermanos Rodriguez following last weekend's race to help the manufacturer with its preparations for the 2018 season.

Leclerc, in the C36-Ferrari, racked up 115 laps, with Celis Jr., in the VJM10-Mercedes, completing 114 laps, all on slick rubber in warm and sunny weather conditions.

As per usual, Pirelli defined the run plan, with drivers unaware of tire specifications, and all data gathered during the test to be shared between each Formula 1 team.

Leclerc, who won this year's Formula 2 title and is a contender to race for Sauber in 2018, will stay on at the track on Wednesday, while Force India will depart.

Red Bull driver Max Verstappen will carry out a demonstration run in Formula 1 machinery in Las Vegas later this week, fresh from victory at the Mexican Grand Prix.

Verstappen will appear at SEMA Ignited, the official aftershow of the SEMA automobile aftermarket convention, which takes place at the Las Vegas Convention Centre.

Verstappen will drive the double title-winning RB7, driven by Sebastian Vettel and Mark Webber during the 2011 season, on Friday, performing straight line runs and burnouts.

Earlier this year, Formula 1 CEO Chase Carey named Las Vegas as one of four standout candidates for a second race in the United States, along with New York, Miami and Los Angeles.

After a brief period off the calendar, the US returned to the Formula 1 calendar in 2012, at the purpose-built Circuit of the Americas, located in Austin, Texas.