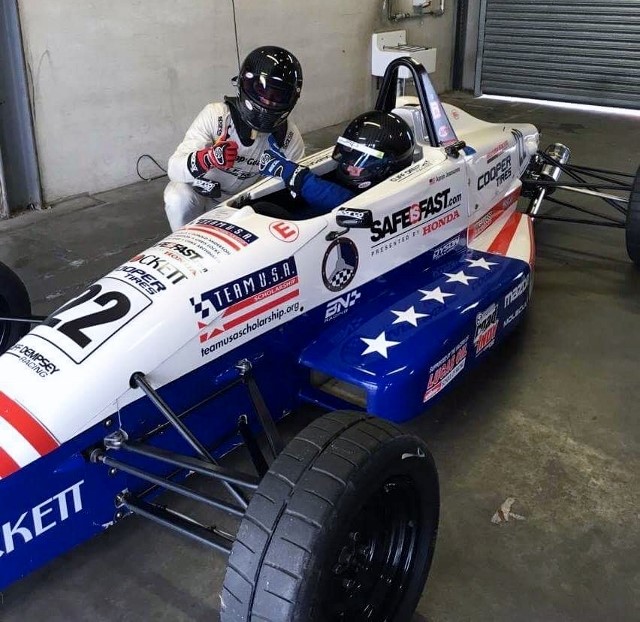 CORBY, England – The dust has settled days after the Formula Ford Festival and our focus has now shifted to the prestigious Walter Hayes Trophy. The learning curve at the Festival was unreal; I can honestly say the entire process was even more difficult than I had imagined. Throughout the week, the weather was anything but stable. Jonathan and I were forced to learn the track in basically different conditions every session we went out!

With basically no experience in the wet (aside from practicing on a damp track only a couple of times in the Lucas Oil Series and a wet test session the previous week at Oulton Park), I was actually quite nervous with the high possibility of rain here. When we went out for the first wet session, I knew it was time to learn to love the wet, and so I did. We drove in constantly changing conditions so it was a very valuable learning experience to have the chance to feel the track limits as it dried.

When it came time for qualifying, I was placed in the third group. The first two groups' sessions were dry until a downpour occurred at the end of the second session. I never would have thought that I would have said this, but I may have had a little grin and I was excited for the challenge. With a pair of red flags and a substantial amount of traffic in my session, it wasn't easy to get a clean lap in. However, after the second red flag there was still a couple of minutes remaining, and I was able to get a clean and efficient enough lap to place our number 22 red, white, and blue machine fourth on the grid of 25 for the Heat race.

Realistically, I was pleased with this effort and knew that we were in a good position early on. What came next was a short Heat race to determine who makes the Semi-Final and the starting position for it. I was then faced with another first-time experience, a standing start. I must admit, I did not get a good start at all but I still found myself in good position for a possible sixth-place finish until I found myself in an incident with a lapped car. Luckily, I had no damage and I was able to re-enter the track and make the Semi-Final.

The state of the track was much more stable Sunday. My Cliff Dempsey Racing teammates and I were in great shape and four of us were able to make the final out of five! I had gotten an exceptional start in the Semi-Final and I felt ready for the biggest race of my life. Jonathan and I had our work cut out for us though, starting from 16th and 18th on the grid. My goal at this point was simple; to move forward as much as possible.

At the start of the race, I had another decent start and maintained position. I then felt I was “initiated" into the world of British Motorsports. The amount of aggression and competition from the other drivers was astounding. The drivers I was battling for 15th were nearly as fast as the leaders and each pass had me feeling the adrenaline of passing for the lead! I can honestly say I absolutely gave it my best effort, and I was able to finish 13th,finish close behind Jonathan in 11th.

We now find ourselves in between the events and we were able to test again at Donington Park a couple of days ago. It was nice to return there after learning the car and I felt that a good test day gave us positive momentum moving towards Silverstone. I may have shed a tear when we left Donington because I don't know when I will ever have the chance to come back here, but we still have lots to look forward to.

Over the next few days, we plan to sight-see the country some more and take a trip to London. This opportunity doesn't come around often so we are making the best of it! We are also set for a tour of McLaren Monday so I’m really looking forward to checking out their history and spending time with them. After seeing a McLaren Formula 1 car up close at the Donington museum, I am very excited for the tour.

Regarding the Walter Hayes Trophy, I can't put into words how cool it will be to race around a current F1 circuit. We are definitely feeling more prepared and looking forward to giving our best.

Once again, thanks for reading!