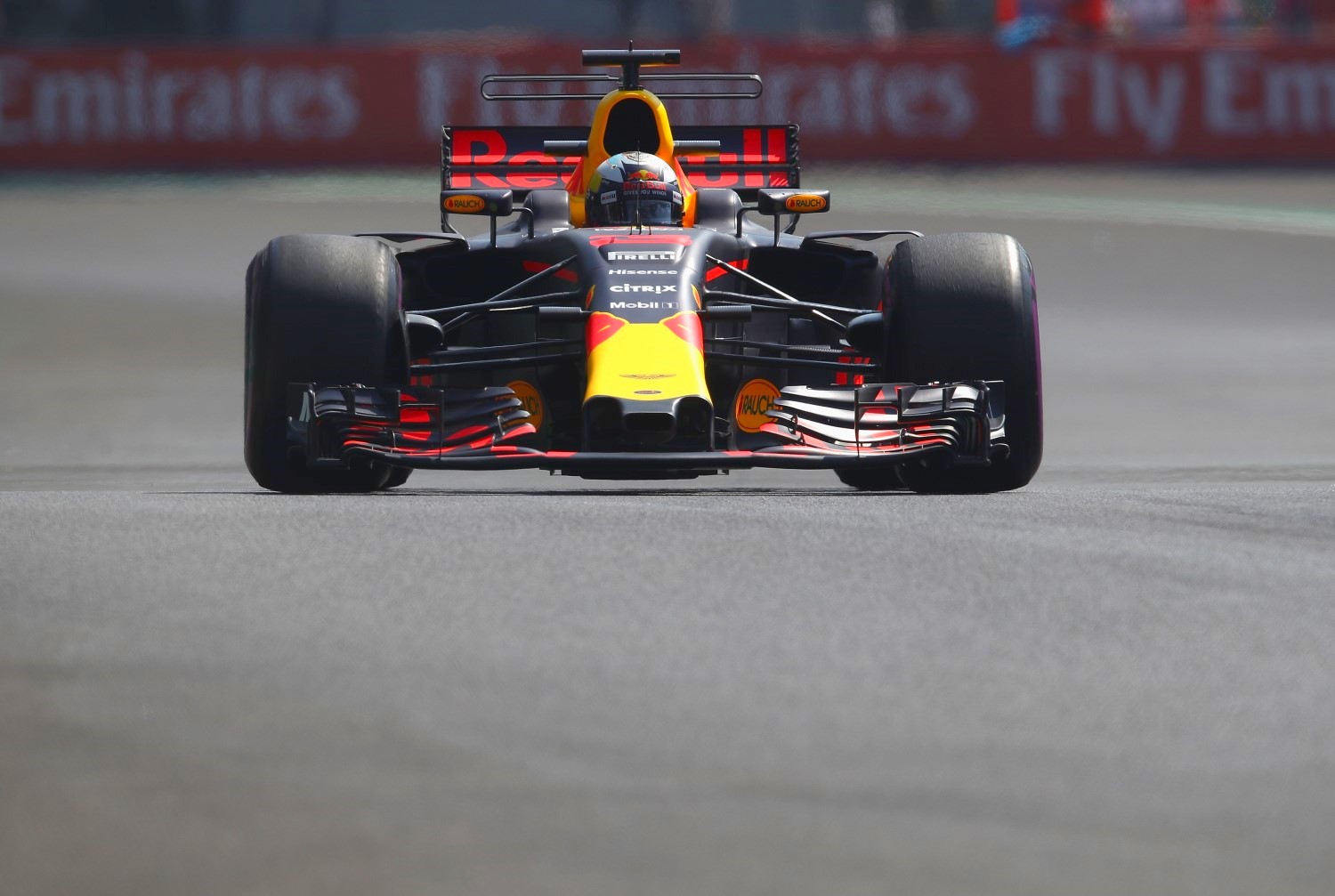 Daniel Ricciardo set a new track record to lead a tight second practice session on Friday afternoon in Mexico that saw less than half a second cover the top six.

Championship leader Lewis Hamilton was a tenth down in second, while the 2nd Red Bull of Max Verstappen was third just three hundredths of a second slower than the lead Mercedes.

Ferrari came up just short in fourth and fifth – Sebastian Vettel fractionally ahead of teammate Kimi Raikkonen – while FP1 pacesetter Valtteri Bottas ending the session in sixth, after focusing on long runs.

McLaren's Fernando Alonso continued his strong form to claim seventh, ahead of a tight battle between the Force Indias and Renaults – one that was eventually settled in home favorite Sergio Perez's favor, with Nico Hulkenberg, Esteban Ocon and Carlos Sainz all fractions of a second down the road.

The session itself was littered with errors and issues – most notably for Romain Grosjean, whose Pirelli delaminated just after a spin, with the spewed carcass and bodywork damage triggering red flags for a clean-up. Grosjean completed just three laps as a result, well down on the leading tally of 43, set by Bottas.

Several other drivers – including Hamilton, Toro Rosso's Brendon Hartley and Williams' Lance Stroll – had spins, although all escaped relatively unscathed.

Daniel Ricciardo
Today was pretty positive and it’s always nice to be on top of the time sheets. I still feel we can improve a bit and we know Mercedes always find more on a Saturday when it counts. I think we still need to find a few tenths to stay in the fight, but we will work on that tonight. It’s nice not having to change much on the car because we don’t seem too far off. It’s always tricky here with the low grip and it’s very easy to make mistakes which you could see today with all the spins. You have to be careful, be very nice to your car, have a good feeling and that really helps around here. I think we managed to find a pretty good set-up today with the car and the tyre temperatures, but it doesn’t mean it will be easy for us all weekend. It doesn’t look like I will have to make an engine change, so unless something unplanned happens then I will race from my Qualifying position on Sunday. If she keeps ticking over then we are keeping her in! Sunday will be really close, but today was a good day, so we will try and keep it going for the rest of the weekend.

Max Verstappen
The pace of the car seems good, we tried a few new bits for next year this morning to understand them but I didn’t like the feel so we stopped running early. We lost a bit of momentum and didn’t do as many laps as we would have liked, this also meant we fell a bit behind on set-up. This afternoon we were playing catch-up on achieving a good car balance, we didn’t get it where I wanted it but we were still third before we finished so I think the potential is there. Grip is always low here due to the altitude. With the other categories going out later today and laying rubber it should improve the grip as the weekend goes on. The day ended with a MGU-H failure but it was an old engine so nothing major to be concerned about looking ahead for the weekend. Daniel’s pace looked good and we were quickest on all compounds which is very positive. We still don’t have that extra power for Qualifying but I think we look good to fight for a descent result on Sunday as race pace looks strong.

Lewis Hamilton
It's been a good day today. It didn't really start out great, particularly in the second session with the big spin on my first lap. That really threw off the session and obviously made it a little bit tricky to get the run on the SuperSoft. So I put myself on the back foot. But the single lap and then the long run on the UltraSoft was probably one of the best I've ever done. I don't think I've ever done 26 laps that consistent, apart from in the race maybe. We got lots of information, the track was feeling better in the second session once the temperature came up. It was great to see all the fans buzzing already today, in the paddock but also in the big grandstands. So overall a good day.

Valtteri Bottas
First practice was good; I really enjoyed it. It is such a fun circuit to drive because it has quite a low grip, so it is definitely challenging. We made some set-up changes for FP2 which went in the wrong direction. So in the end of the session we went back to the original set-up. For some reason I also struggled to get the tyres to work in the second session. That's why it didn't look as good as the first one. But I think it was a positive day overall, I'm looking forward to qualifying.

James Allison
That was a pretty positive day overall. The morning session was dominated by graining on the tyre, which then improved in the afternoon session as we normally see here in Mexico. Losing a tyre set on Lewis' first run in FP2 actually turned out to be a blessing in disguise because we then had a really nice long run on the UltraSofts later in the session. So between both drivers we got a good look across all the compounds and we're pretty happy that the cars are behaving well on this unusual track with its very smooth asphalt and challenging conditions for brake and engine cooling. Overall it looks promising for tomorrow and for Sunday as well.