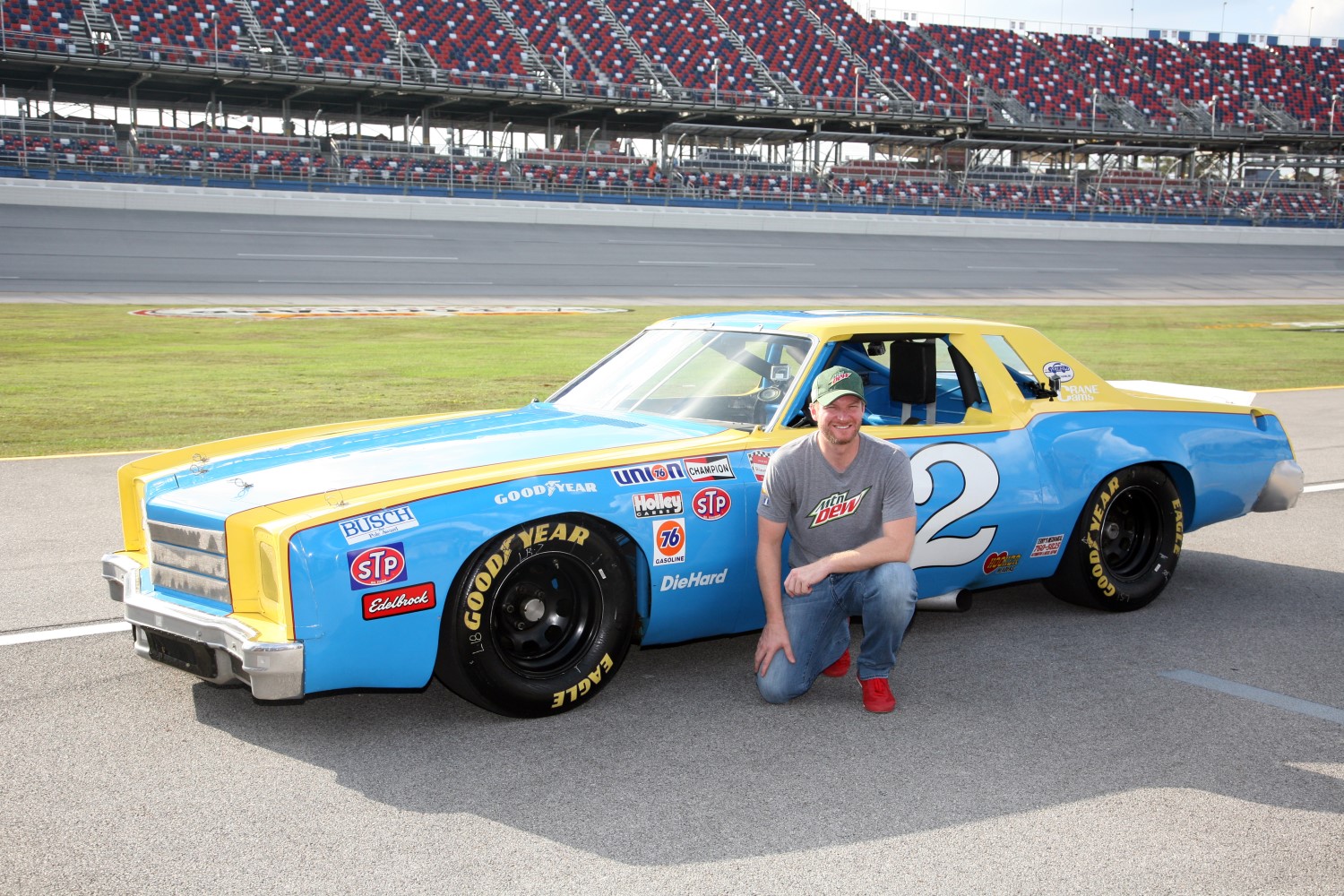 Before six-time Talladega Superspeedway winner Dale Earnhardt Jr. takes his final laps at the track he considers his "second home" in Sunday’s Alabama 500 Monster Energy NASCAR Cup Series (MENCS) race, the track surprised him Friday afternoon by presenting him – on permanent loan – with the No. 2 Chevrolet Monte Carlo driven by his father Dale Earnhardt Sr. to the 1980 NASCAR Championship title. The presentation was made by Grant Lynch, Charmain of Talladega Superspeedway, and Alabama Senator Gerald Dial, Chairman of the Board of the International Motorsports Hall of Fame (IMHOF), located outside of the 2.66-mile track.

“There’s no better place for this iconic No. 2 car than in the hands of Dale Earnhardt Jr.," said Lynch of the car that has been housed at the IMHOF for a number of years. “The Earnhardt family means more to Talladega Superspeedway than we can express, so it is our honor to present the race car his father drove to his first championship to him. We know he will cherish the car like no other. It is in good hands."

The blue and yellow, white numeral No. 2 was driven by Dale Sr. during the 1979 and 1980 MENCS seasons. In 1979, he drove the Rod Osterlund-owned machine to the NASCAR Rookie of the Year Award, winning once at Bristol. During the 1980 campaign, he led the points standings from the season’s second race through the remainder of the season, en route to winning the first of his record seven championships in NASCAR’s top-tier series.

“It is with great honor that the International Motorsports Hall of Fame presents this car to Dale Jr.," said Sen. Dial. “He has left an incredible legacy not only on Talladega, but also on motorsports as a whole. There is truly no better way to honor all he has done for racing than to present him the very car that his father drove."

The fall 2000 event is one of the most memorable races in motorsports history as Earnhardt Sr. vaulted from 18th place with five laps remaining to claim the lead with just over a lap to go. The win was his record 10th Talladega triumph, and 76th and final win of his career. The following fall, Earnhardt Jr. added to the family legacy at TSS, winning his first race at the fabled facility. That victory set off an unprecedented stretch for Dale Jr. at Talladega as he went on to win a record four straight ‘Dega races, a mark that still stands today. Dale Jr., who notably has said how much he loves Talladega and its fans, was named an honorary member of the famed Alabama Gang – legends Bobby & Donnie Allison, along with Red Farmer – a year ago.

“I am so surprised. I didn’t think I was going to take home a race car with me from this weekend," said an excited Dale Jr., who fired the engine, then took the classic machine around Talladega’s 33-degree banking for a couple of laps. “Just got to thank Talladega Superspeedway and the state of Alabama. They’ve been really good to me. Hopefully, we can get a win for them this weekend.

“I got to take it for a couple laps. That was fun. I drove it through the garage, so all the guys could see it. It was pretty neat just to trying to imagine what it would be like running that thing around it 180, 190 miles an hour." I’ve never driven anything old like this with some real history. I love to be able to just sit in the car and see the perspective of what the view was like. It is pretty different than our cars today."

The Earnhardt legacy at Talladega extends back nearly four decades. Perhaps, Earnhardt Jr. will add to the family history at NASCAR’s Biggest and Baddest track with a victory in Sunday’s Alabama 500 (1 p.m. CDT), the “Wildcard" second race in the Round of 12 of the MENCS playoffs.

The weekend also features the fred’s 250 Powered by Coca-Cola NASCAR Camping World Truck Series (NCWTS) event, the cutoff race in the Round of Eight in the NCWTS playoffs. The race is set to go green at 12 Noon (CDT) on Saturday.

There is still time to secure your tickets for this stop on Dale Jr.’s #Appreci88ion Tour, so log on to www.talladegasuperspeedway.com or call the track’s main ticket office at 855-518-RACE (7223).