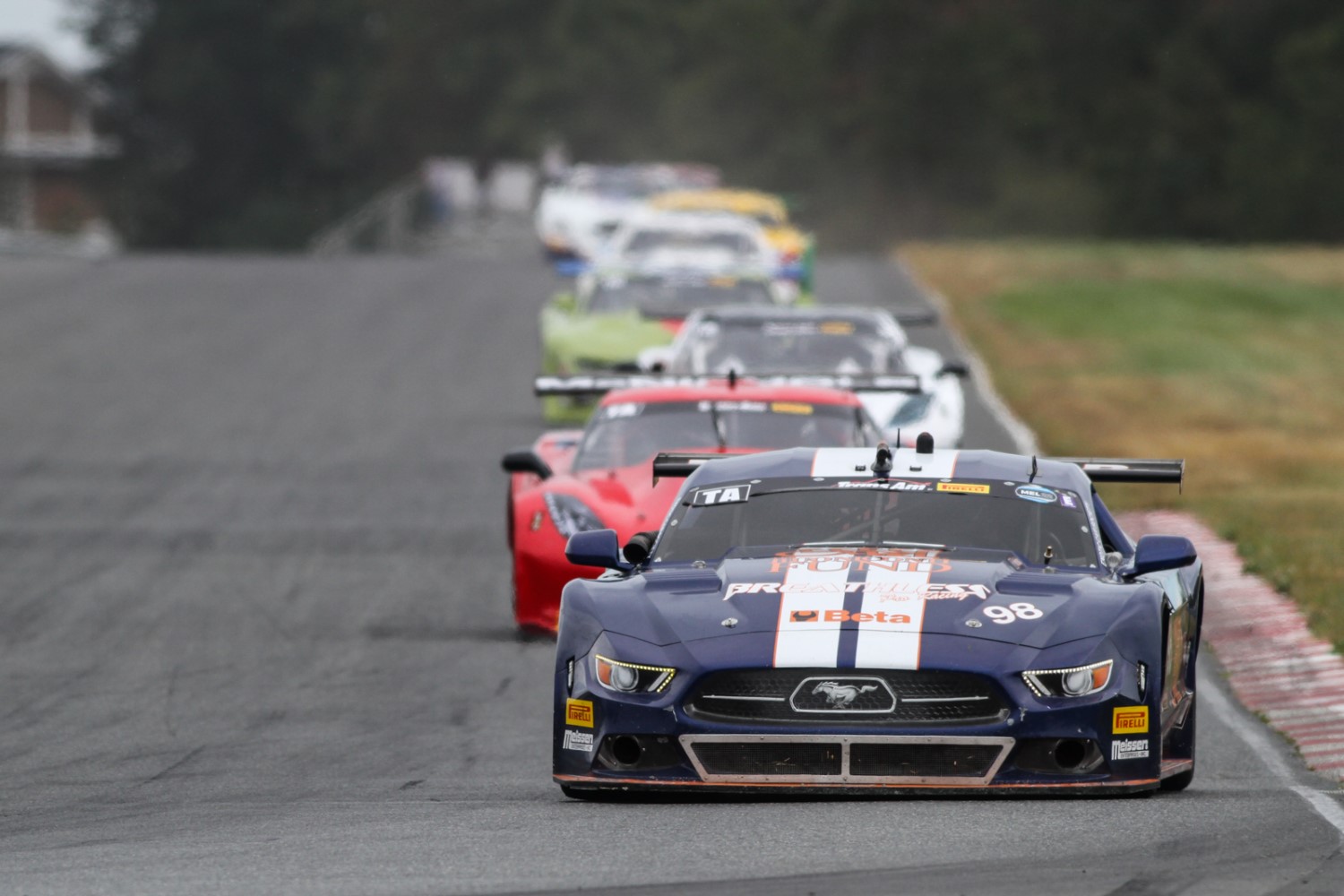 MILLVILLE, NJ. – As Ernie Francis, Jr., took the checkered flag for the New Jersey Trans Am 100 at New Jersey Motorsport Park, he not only secured his eighth win of the 2017 season — he clinched the TA class championship with two races remaining. Joining Francis in celebrations were TA4 class victor Brian Kleeman and TA3 winner Neal Walker, while Gar Robinson claimed victory in the TA2 class’ New Jersey Muscle Car Challenge earlier in the day.

And while the weekend ended in jubilation for Francis and the Breathless Pro Racing team of the No. 98 Buoniconti Fund Ford Mustang, the early stages were nothing but hard work after the No. 98 suffered an engine failure in testing. The entire crew, and Francis himself, worked to switch to a backup engine for qualifying, just in time to secure pole for the race — a position he would hold through 101.25 miles of multi-class traffic on the NJMP “Thunderbolt" track before bringing home the TA class win and championship.

At 19-year-old Francis becomes the youngest TA class champion, overtaking series Chief Steward Wally Dallenbach, Jr., who won the title in 1985 at the age of 22. The championship is the fourth of Francis’ Trans Am career, with three TA4 class championships already under his belt.

“I’m at a loss for words on how to describe this right now," said Francis. “We didn’t really think this could happen early this season. We were going to try for it, but we didn’t expect to be able to win a championship this year or really this early in the season. To accomplish this, it took a team effort from everyone. Our sponsors, our engine builders, our transmission builders — they did a great job all season long. But it definitely wasn’t easy for us, this last race was tough."

Francis would build up a substantial lead over the first 31 laps before a full-course caution came out for the retrieval of the No. 86 of John Baucom stopped in an unsafe position; with the field collected behind Francis, the Breathless Pro Racing team was informed the No. 98 had been assessed a 30 second penalty for jumping the start. When the field restarted on the 35th lap, Francis proceeded to build a 36-second lead over the remaining 10 of the 45 — crossing the finish line with the time in hand to remain in first position after the penalty.

“We had the lead pretty well locked down; then the caution came out," said Francis. “Then over the caution we were told we had a 30-second penalty for accelerating early on the start. So we knew we had to build up a 30-second gap over the rest of the field before the finish line — so we pushed as hard as we could and ran qualifying speed laps. We opened up a 30 second gap over second place and came home with the championship."

“This weekend was a big effort by the crew," said Francis. “The engine went out on just the first test session about 10 laps in. We spent that day changing the engine, making sure everything was good to go. The second day we just did two data laps then went straight out to qualifying. We were amazed by the pace of the car; it is an old reliable engine — it won most of the races early in the season and went back in at Mid-Ohio for another win. It has some luck; we’re going to get it rebuilt and bring it over to Texas."

Simon Gregg, in the No. 59 Derhaag Motorsports Chevrolet Corvette, would finish second after starting fifth, for his best finishing position of the season, while Jim McAleese in the No. 03 McAleese & Associates Chevrolet Camaro, secured third for his first podium finish of the year.

In the TA4 class, points leader Brian Kleeman, in the No. 07 DWW Motorsports Ford Mustang, completed a drive from the back of the TA4 field to secure his seventh win of the season, moving up into first position after 10 laps and navigating the 14-turn course and traffic for the remaining 35.

“The goal this time, with the finale closing in, was just points," said Kleeman. “Obviously we want to get as many as we can, but we really had to be careful into turn one — and then it was just picking them off one by one and being careful about it. The car was flawless; the weak link this weekend was the heat — in October it was as hot as it ever is here and we had a cool suite issue. The car was perfect, as were the Pirelli tires, they just don’t give up — so hats off to Ford, DWW Motorsports and all those guys."

Finishing second in the TA4 class was Andrew Entwistle, in the No. 10 Phoenix Performance Ford Mustang, for his second podium finish of the season in his third appearance. Entwistle gained the position after a pass on the inside of turn 1, three wide on lap 25 — for the move Entwistle was given the Coolshirt Systems Cool Move of the Race.

Todd Napieralski, in the No. 39 Chevrolet Performance/ TREMEC Chevrolet Corvette, would come home third, keeping Brian Kleeman within reach of the TA4 championship with two races remaining, while Steven Davison, in the No. 2 DaVinci Plastic Surgery Aston Martin Vantage GT4, and Chris Outzen, in the No. 97 DWW Motorsports Ford Mustang, completed the top five.

The victory bolstered Robinson’s win total to six over the course of the 11 rounds of competition so far, while extending his points lead over Tony Buffomante, the defending champ.

Robinson began the race in second position and alongside Buffomante, who set pole in the No. 34 Bestline Superior Lubricants Ford Mustang, but would take the lead early on the second lap. Robinson and Buffomante would run nose-to-tail through the remaining 43 laps of the 101.25-mile contest, with Robinson holding off the No. 34 by .619 seconds come the checkered flag.

“It was exhausting," said Robinson. “There aren’t a lot of places to pass here; I knew if I was going to be able to get around Tony it was going to have to be early and it was going to have to be quick — it would have to be unexpected. I had a good run onto the back straight. I think Tony made a slight mistake, and I knew I had to capitalize while he was in range. It was a tough race; the guys finally got me a car that I truly like — with the rear end out and a rocket ship. Hats off to the Robinson Racing team for putting together a great car. It was exhausting for sure, but I had a great time."

Robinson’s points lead over Buffomante now stands at 43, with two contests remaining on the Trans Am schedule and a total of 70 points up for grabs; and despite what equates to a full race lead, Robinson is taking nothing for granted.

“We’re going to have big fields at COTA and Daytona," said Robinson. “Anything can happen during those two races. Obviously, COTA, our home track — it’s on my list that I’d really like to win. We’ve been right there for the past two years… but we’ve got to play it smart. If there’s an opportunity, I’ll take it; but we’re points racing — racing is unpredictable, but I’d love to take home championship number two."

Buffomante’s second place finish stands as his seventh podium of the season, keeping him within striking distance of the No. 74 as the year comes to a close. Joining the two front-runners on the podium was Shane Lewis, pilot of the No. 72 Pura Vida Tequila/ 74 Ranch Resort Chevrolet Camaro also out of Robinson Racing, who secured third — albeit by 17.923 seconds behind the leaders.

The Trans Am Series presented by Pirelli will return to the track on Saturday November 4 at Circuit of The Americas for Round 11 of the 2017 Trans Am Championship.