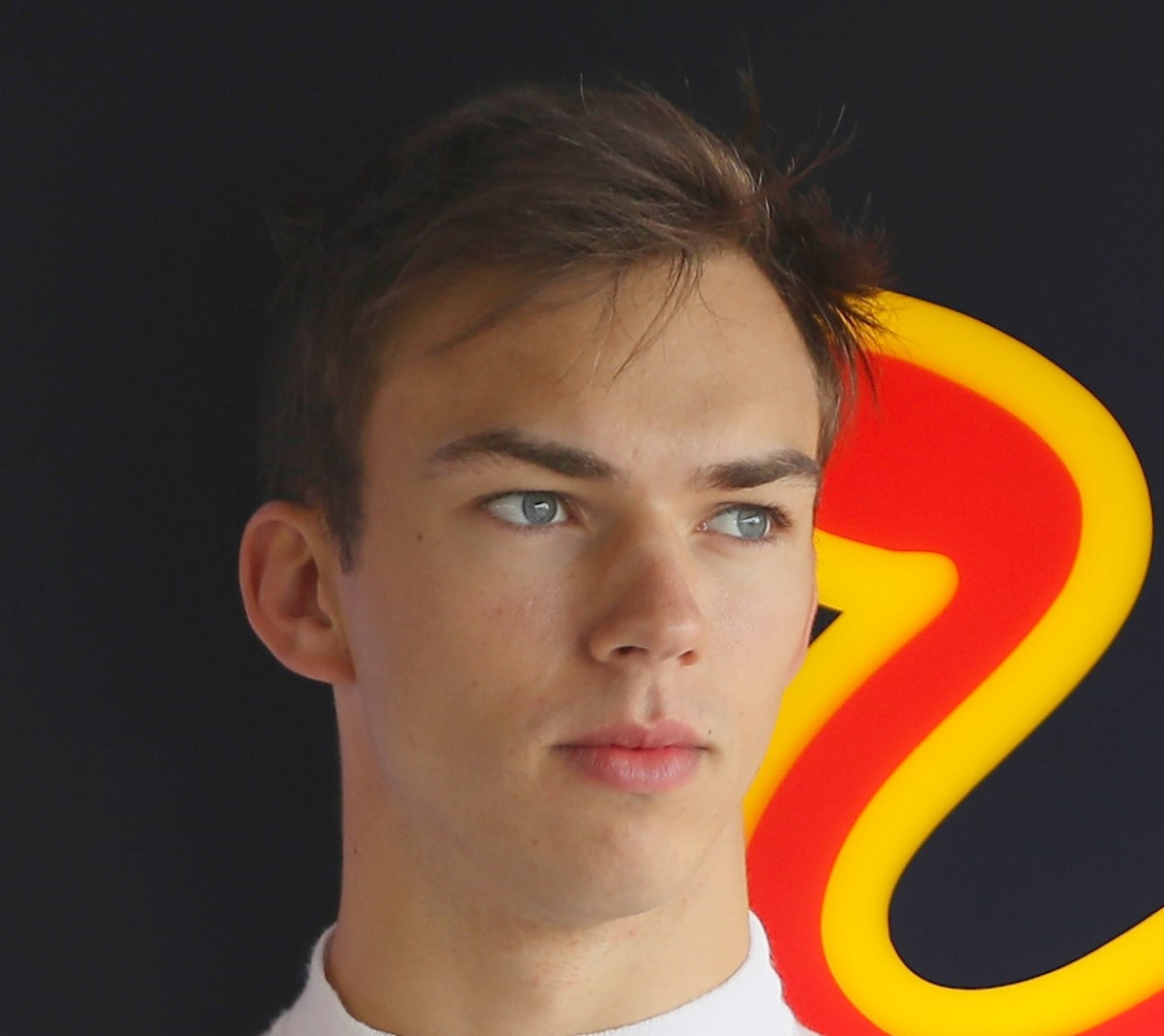 As GP2 champion, the Frenchman was sent to Japan this year by backer Red Bull as he waited for a vacancy at the junior F1 team Toro Rosso.

But Gasly has now made his F1 debut in axed Daniil Kvyat's place in Malaysia.

"We thought it was a good time to test him," said Toro Rosso boss Franz Tost at Sepang.

"We are taking him into consideration for next year," he told the Finnish broadcaster C More.

"He will definitely be in Japan (for next weekend's grand prix) and then we will look at the situation after that. But I am sure he will be in the car more often this season," Tost added.

After this Malaysia-Japan double header, F1 heads to Austin — which clashes with the Super Formula season finale at Suzuka.

Gasly, 21, admits he would like a shot at the title.

"A title is always important," he said in Malaysia.

"After the championship in GP2, this was of course my next goal. But it would also be great if I could drive in Austin. I don't know where I'd rather be.

"I think if I knew I could finish the entire F1 season, I'd rather be in Austin," he added. "Formula one is my big goal."

Gasly said he also has not been guaranteed the full-time Toro Rosso seat for 2018.

"They have not spoken to me about my future," he insisted. "Of course if it was up to me, I would have signed the contract for next year already."

Until just a few races ago, Finland's Bottas was performing well in his first season for Mercedes alongside Lewis Hamilton.

But a few races ago, Bottas' performance began to slump, and the problem is no better this weekend in Malaysia.

"It's hard to say anything about it," the 28-year-old told the Finnish broadcaster C More.

One potential explanation at Sepang is a new Mercedes aerodynamic package, with only Hamilton reverting to the former specification after practice.

But Bottas said: "I don't think that explains the big difference.

"It's easy to say now, but if I could do it again, I would use the old aerodynamic package. But the gap in Q3 was actually huge."

His boss, Wolff, commented: "Of course I'm worried, because I want Valtteri to do well — as we all do in the team.

"In the last 3 or four races we have seen moments when he is very competitive, however, the car is quite difficult and it is not easy to find the best grip with the tires," he told Turun Sanomat newspaper.

Wolff, however, backed Bottas to get back to his former level of performance.

"His intelligence and his skill is enough to put the puzzle together," he said.

"We still have a lot of races with Valtteri to eliminate this problem. We have very good drivers who are able to get out of difficult situations, so I have doubt that Valtteri will be able to do that."

(GMM) Williams has confirmed rumors Robert Kubica is in the running to join the team next year.

Earlier, Renault had a contract 'option' on the Pole for 2018, but after a series of tests the French outfit decided against signing him.

"I am very realistic and I know that the possibility of my returning full-time to racing in formula one is very slight," Kubica, who has a permanent arm injury, told the FIA magazine Auto afterwards.

However, it is believed Lance Stroll's father Lawrence, the Canadian fashion billionaire, would prefer either Massa or Paul di Resta to occupy the seat next year.

Kubica's chances are reportedly being championed by Paddy Lowe, the Williams technical boss and co-owner.

"Robert is definitely a very interesting option," Lowe is quoted by the German broadcaster RTL.

"Luckily we're not in a hurry to decide."

Perez had IV treatment after qualifying

(GMM) Sergio Perez was rehydrated with the help of an IV drip after qualifying in Malaysia.

The Mexican told the media he has been suffering from a stomach virus.

"This is possibly the worst place to not feel 100 per cent," said the Force India driver.

As they spoke with the 27-year-old, reporters noticed that Perez had a 'band-aid' plaster on the inside of his forearm.

He confirmed: "I had to replace all the fluid that I have lost in this way.

"I suffered a lot in qualifying and this is the hardest race on the whole calendar, so it will be difficult for me."

Vettel will not give up title fight – Lauda

(GMM) Mercedes is not expecting Sebastian Vettel to give up in the 2017 title fight.

After Singapore, the German's chances already took a big hit with his first corner crash.

And now in Malaysia, Vettel is starting the race dead last after a technical problem aboard his Ferrari in qualifying.

"But maybe he'll get lucky with the safety car," he told Speed Week.

"What I do know is that he does not give up. That is his mental strength. He has to hope for luck in the race and to end up between third and fifth in the race. That would be the best damage limitation," Marko added.

"I feel sympathy with them because I know the situation," he told Turun Sanomat newspaper.

"We've been through it before. I remember Lewis' engine on fire in Budapest in 2014, and the same thing when he was clearly leading in Malaysia last year.

"Fans all over the world want to see this battle for the championship take place on the circuit," Wolff added. "On the other hand, this is motor sport and to succeed you need everything to fall in place."

"A high-performing sportsman like Sebastian is never going to sit down and say it's over," he is quoted by Bild newspaper.

There are sceptics in the paddock who question the move.

"If Honda cannot make significant progress in three years, they never will," Christian Danner, a former driver, is quoted by Salzburger Nachrichten newspaper.

But Red Bull's senior team is set to split with Renault after next year, and therefore sees Honda as a potential partner for 2019.

"What we know from Honda shows that things are going up," he said ahead of his trip to Japan early next week.

"The technical and financial resources are there, as is the ambition to improve through this new start."

Salzburger quoted an unnamed 'Honda F1 driver' as saying he is also hopeful the Japanese marque is improving.

"Honda will increase its F1 budget by 50 per cent for 2018," he said. "It is the funds freed up by the McLaren sponsorship."

Ferrari has confirmed that it has fitted new power unit components to Sebastian Vettel's car ahead of the Malaysian Grand Prix.

Vettel suffered an electrical fault during the closing stages of the third practice session, and Ferrari installed his fourth Internal Combustion Engine and fourth MGU-H of the season.

However, a failure during the opening moments of Q1 slowed Vettel's car, and he was unable to post a lap time, leaving him at the back of the grid.

Ferrari has opted to take advantage of the situation by fitting a fifth ICE, MGU-H and Turbocharger to his SF70-H.

As it is the first time Vettel has used a fifth power unit element – exceeding the season-limit of four – he has been given a notional 20-place grid penalty. He was starting last anyway.

Toro Rosso's Pierre Gasly expressed satisfaction at his performance during his maiden Formula 1 qualifying session at the Malaysian Grand Prix, as he took 15th place.

Gasly languished in the drop zone during the closing moments of Q1 but hauled himself up the order to secure safe passage through to Q2, alongside team-mate Carlos Sainz Jr.

He ultimately finished as the slowest of the 15 runners in Q2, having failed to improve on his Q1 time, but wound up just one spot and 0.156s behind Sainz Jr, and was pleased with his effort.

"I think today was positive and I'm happy – your first qualifying in Formula 1 is always a special moment and one I was really looking forward to," said Gasly.

"I tried to give my best and I think we made really good progress between FP3 and qualifying.

"I felt comfortable in the car in Q1 and then, in Q2, I kept on learning while giving my all and I'd say we can be satisfied with the result!"

Sainz Jr., meanwhile, was unimpressed by Toro Rosso's one-lap display, believing that updates delivered to the STR12 did not perform as expected.

"I'm not surprised with ending up P14 today because it's more or less where we've been all weekend," said Sainz Jr., who finished fourth last time out in Singapore.

"It's for sure something we need to look into, because at the moment we're a bit too far away from Q3.

"Before coming here we thought we'd be performing a bit better than what we have done up until now.

"The updates we've brought here aren't really working as well as we expected, at least not for now."

Esteban Ocon reckons he and Force India discovered the VJM10's "sweet spot" during qualifying for the Malaysian Grand Prix as he logged the sixth-best time.

Ocon was at the sharp end of the midfield battle through the three-stage qualifying session and posted a 1:31.478 in Q3 to ensure he finished ahead of his primary rivals.

"I think it's up there, but I don't think it's the best," Ocon said of his qualifying lap.

"I missed the last corner, but let's not speak about that!

"It's a great team achievement today, looking at where we were in Singapore, the week of analysis that we did.

"We just put the car out this weekend and it was very near where we needed it to be – I think we found the sweet spot in qualifying."

Ocon's team-mate, Sergio Perez, will start from ninth position, believing his prospects were compromised by illness and an error through the right-hander at Turn 11.

"It wasn't an easy qualifying session for me," said Perez, who was beaten by Ocon for only the fourth time this season.

"I've been unwell this week and this is possibly the worst place to not feel 100 per cent.

"I made a mistake in Turn 11 during my final lap in Q3 and lost my rhythm. It was a small lock-up on what had been a very good lap until then, but it cost me enough time to be only ninth.

"It's still a good result, all things considered, and it puts us in a good position for the race."