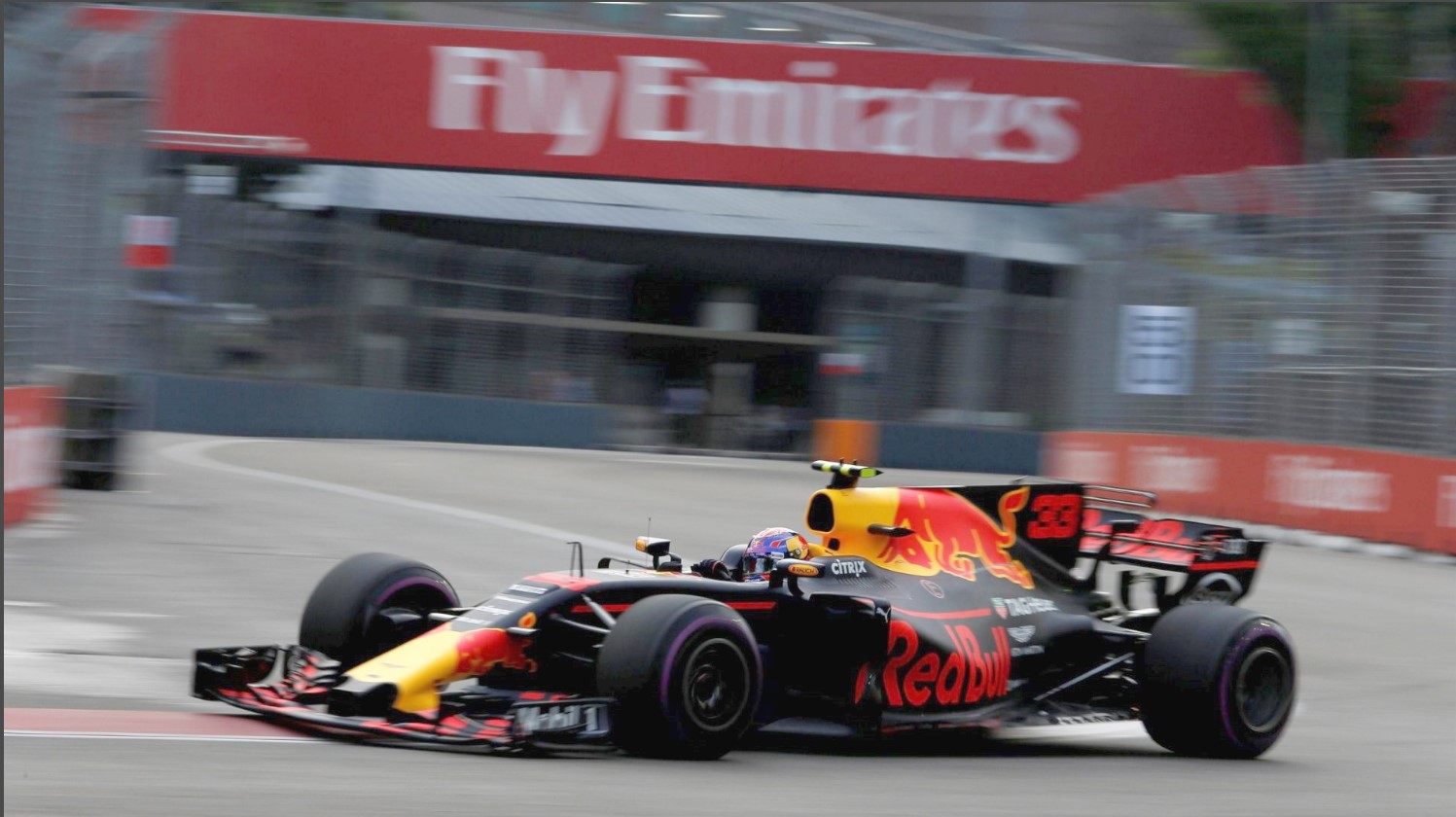 Daniel Ricciardo was fastest in opening practice on the streets of Singapore and after the sun went down he was even faster, leading a Red Bull 1-2 in the 2nd practice session for the Singapore GP. His time of 1m40.852s was 1/2-sec faster than his teammate Max Verstappen.

It was a very smooth and collected Hamilton who got closest to them, albeit seven-tenths down, after Vettel aborted his out-of-sequence run on ultras having stumbled across traffic. The German then whacked a wall and ripped down an advertising hoarding, bringing out the Virtual Safety Car temporarily while the debris was cleared. Thankfully for him, his Ferrari escaped damage.

Hamilton lapped his Mercedes in 1m 41.555s on the purple rubber, on which everyone bar Vettel set their best times, and was followed by team mate Bottas on 1m 42.104s.

Nico Hulkenberg was again on strong form for Renault with 1m 42.448s for fifth ahead of the McLarens of Stoffel Vandoorne and Fernando Alonso, Sergio Perez’s Force India, a subdued Kimi Raikkonen for Ferrari and Esteban Ocon in the second Force India. Vettel was an unrepresentative 11th on 1m 43.104s, which he set on the soft tyre.

On race pace the Red Bulls also looked good, with Mercedes a little bit behind.

Once again Romain Grosjean was in the wars for Haas, spinning in Turn 7, going off later in Turn 2, and complaining of poor front tyre performance and gearbox problems. Team mate Kevin Magnussen was another to brush the Singapore walls, as was Renault’s Jolyon Palmer.

Carlos Sainz, back in his Toro Rosso after Sean Gelael drove it in FP1, went off in Turn 18 early on, later complained that revised settings weren’t working, then ran down the escape road in Turn 18 right at the end.

“It was a good day out there today, but I expected this, to be honest, and am not really surprised with our performance. I knew we would come here with a good car. We made some progress from the morning and even though we were the quickest in FP1, I still wanted to get more out of the car and the set up in the afternoon. We took another step forward throughout the day, which was good and we now hope there is still more room to improve for tomorrow. I’m after a dominant weekend and so far this has been a good start. It’s important that we obviously keep that for tomorrow but I have faith that we can perform on this level all weekend. I know the challenge in Qualifying will be a potentially stronger Ferrari and Mercedes but I’m confident we can stay up there and fight with them at the top."

“Finishing first and second in the last session means it has been a positive Friday. The car in general performed well so we are happy with that side, the balance can always be improved and we are a bit down on top speed but nothing major to work on. After such a good day we have to believe that a very good result in Qualifying is possible, so we will go for it. Compared to our competitors we look very strong, we didn’t expect to be this competitive so of course this is very pleasing for us. We still have to be cautious and work on all aspects because we know that in Q3 tomorrow they will have improved and be closer; for now we look in a good position. Qualifying will be tight but I’m confident that our race pace offers us the chance of a good result. We know this should be one of our best tracks so we will do our best to capitalise on that."