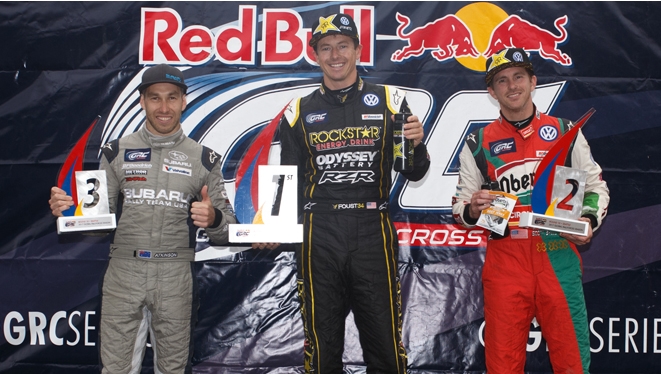 Volkswagen Andretti Rallycross driver Tanner Foust won a Red Bull Global Rallycross event at Evergreen Speedway for the second year in a row, posting a perfect point score at Red Bull GRC Seattle I. Foust, who won professional drifting events at the track before switching to rallycross, held off hard-charging teammate and Supercar points leader Scott Speed for the victory, climbing to second in the championship in the process with only two races to go.

“I’m not sure how many years it’s been – I think it’s been 11 years that I’ve been racing here," Foust said from the podium. “Some of the best racing we have is here (at Evergreen), so we appreciate you coming out here year after year. We’ll have great racing tomorrow, so hopefully we’ll see you guys then too!"

Save for qualifying second to Chris Atkinson, Foust was untouchable for a majority of the event. He won Friday night’s first-round heat, held Speed off in the second round, took an easy victory in the third, and won his semifinal. At the start of the final, he beat both Speed and Atkinson in a drag race off the line and extended a comfortable gap. Speed closed the gap in the final laps, but was unable to make the pass for the win.

In GRC Lites, Cyril Raymond continued his dominance of the 2017 season by taking his sixth victory in 10 tries this season. The Olsbergs MSE X Forces driver extended his Lites championship lead to 93 points, giving him the opportunity to clinch the championship on Sunday. Dreyer & Reinbold Racing drivers Christian Brooks and Travis PeCoy completed the podium.

“[The win] feels so good. The last [race] in Atlantic City was rough, less rough on me but more for [the crew]. Brett, Kyle, Pricey, Boomer – these guys are absolutely rebuilding this car every single time when you have a rough race like that. Here, to bring it home clean after two solid days of driving, it’s such a good thing especially with a double-header — it feels good. It’s pretty high speed here on the front straightaway and diving into this oval corner, there’s a real focus on the brake release in order to not upset the car and slide up hill. In the next one, there are little pot holes that you look out for. Then you come into the right-hander before the jump, and it feels like complete ice with one patch of grip you have to get that reminds me a lot like snow driving. In the last corner, it’s all about saving tires, so each section of the track there’s a critical thing you have to focus on."

“The day’s done, and we were able to salvage second out of [the race]. We definitely didn’t start off the day very good. There was a lot of drama in between to keep it exciting, but we were able to gain lots of points and we still have a good lead [in the championship standings]. Tomorrow, we’re looking at the same plan – we’ll be safe and collect more points, and eat more Oberto Beef Jerky!"

Red Bull Global Rallycross Seattle will resume on Sunday with Round 11 of the championship, featuring a full slate of heats, semifinals, and finals. The action will air live tomorrow on NBC at 4:30PM ET/1:30PM PT.