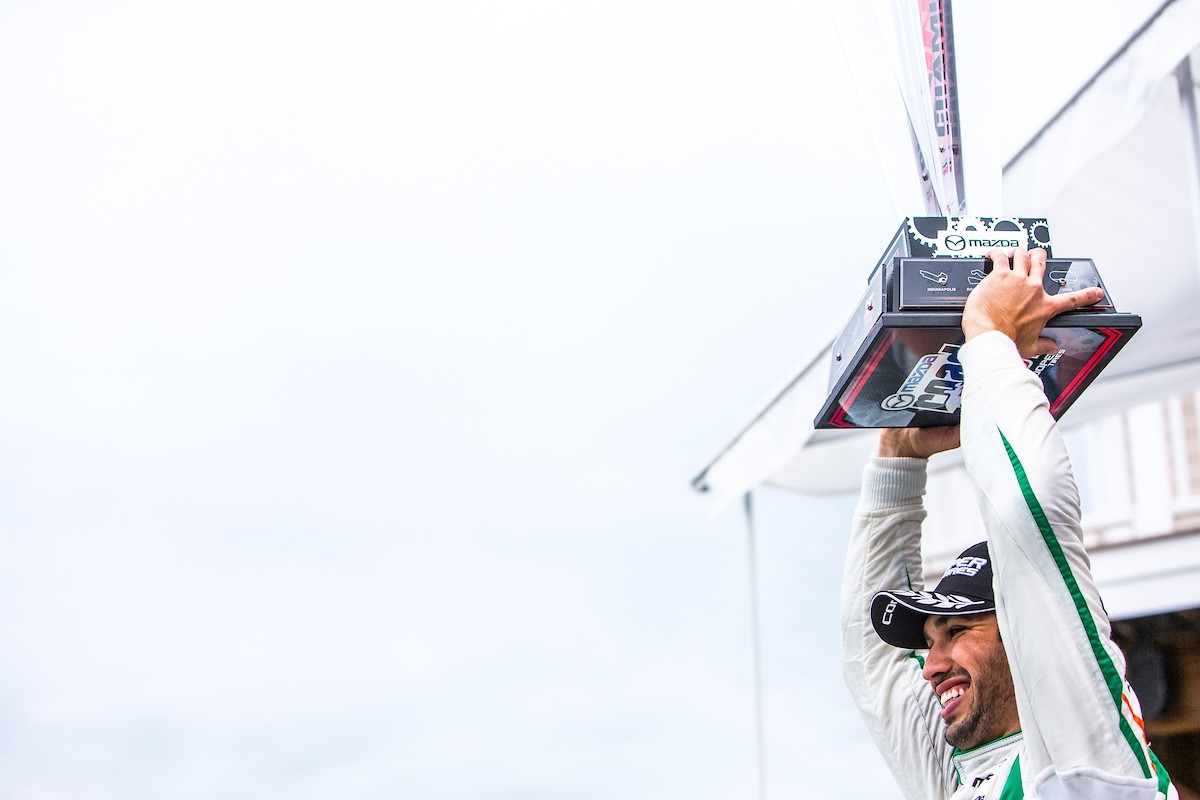 Kyle Kaiser is on his way to drive in the 2018 Indianapolis 500, courtesy of a $1 million Mazda driver development scholarship, as he clinched the 2017 Indy Lights title Sunday at Watkins Glen International in upstate New York. The scholarship guarantees Kaiser three races in next year’s Verizon IndyCar series, including the Indy 500. Three Mazda Road to Indy champions were crowned this weekend, including Victor Franzoni, who won a very tight battle in the Pro Mazda category, and rookie Oliver Askew, who won the USF2000 championship with six wins in 2017.

The Mazda Road to Indy is a program designed to reward championship-winning drivers as they move up the racing ladder from grassroots racing all the way to the top of open-wheel racing in North America.

Indy Lights presented by Cooper Tires: Kaiser, 21, of Santa Clara, Calif., needed to only start the final race to clinch the 2017 crown, but under rainy conditions, he pushed hard for a seventh-place finish as the battle for victory saw current Mazda Road to Indy scholarship winner Aaron Telitz win over Santiago Urrutia and Colton Herta. Telitz won the first race of the season, and then won again in the finale. In a topsy-turvy Indy Lights season where Kaiser often seemed the only constant, 10 of the 16 races were won by rookies.

But in the bigger picture, the focus was on Kaiser and his Juncos Racing team. His consistent season, which included three race wins, was the difference over the rest of the very talented field of drivers.

“The scholarship and going to Indy Car has been my entire goal since joining the Mazda Road to Indy," said Kaiser. “I joined when I was young and early in my career. I learned a lot of things. I made mistakes, went through adversity and that's part of the learning in the Mazda Road to Indy. I grew a lot, I've learned a lot and it's made me a champion in the Indy Lights series!"

Kaiser’s smile grew bigger as he was asked about being excited to be in the 2018 Indy 500.

“That’s the biggest race in the world!," Kaiser beamed. “How could I not be excited by that? The Indy Lights car is the perfect transition into IndyCar. The experience I've gained these three years, by not rushing it, and not moving up until I’m 100 percent ready, is invaluable and it will all transfer into IndyCar. I'm happy with everything and now it’s time to celebrate!"

Pro Mazda presented by Cooper Tires: Franzoni, a 21-year-old from Sao Paulo, Brazil, had an amazing season to win the Pro Mazda championship with Juncos Racing. He won seven times, and finished first or second in every race this season. By winning the last three races of the season, Franzoni topped previous Mazda scholarship winner Australian Anthony Martin in an extremely tight title battle that came down to the final race. By earning the Mazda driver development scholarship of nearly $800,000, Franzoni will move up to Indy Lights in 2018.

The Watkins Glen weekend also marked the end of an era as it was the final professional race for the Mazda Renesis rotary engine. The Pro Mazda series will feature a brand-new Tatuus PM-18 race car next season, which will be powered by the Mazda MZR engine.

“Mazda is not just providing the prize money, they are giving hope," said Franzoni as he celebrated with his team in Victory Lane.

“I think this season, I grew up 10 years," Franzoni said. “Five years into my career, and five years of really really wanting something unbelievable. I had to push all the time at 150 percent to beat Anthony. I think both of us did a great job this season. It was amazing and both of us deserve to be in IndyCar.

“I know today that I will drive Indy Lights," said Franzoni. “It’s unbelievable. I was lucky to be with Juncos Racing. The difference between me and Anthony was so small. We almost did perfect all year – there was almost never a lap where one of us made a mistake. I was following him every time, or he was following me. The only difference was the set-ups. I think that’s what made me win. The drivers were equal, but my team knew the right setup for me. I’m so happy."

Cooper Tires USF2000 powered by Mazda: Twelve months ago, Askew, 21, of Jupiter, Fla. had been in a race car only a few times. Now, he is the 2017 USF2000 series champion. At the end of 2016, he parlayed a scholarship from Team USA into an entry into the Mazda Road to Indy Shootout, which he won to earn a $200,000 scholarship from Mazda for a full season of racing in a Soul Red USF2000 car. With Cape Motorsports, the dominant team in the USF2000 series, Askew ended the year with six victories (including a run of five consecutive wins) and secured the title Saturday by finishing second to his championship rival Rinus VeeKay of the Netherlands. Askew’s scholarship of nearly $400,000 allows him to move up to the Pro Mazda series in 2018.

“I’ve dreamt about this moment for so long," Askew said, after climbing out of his car in Victory Lane. “It’s such a huge weight off my shoulders to be champion. My learning curve has been really steep this year, but I’ve had so many great people around me and I learned something every day at the race track. The priority [today] was to finish on the podium in case Rinus won, and we did that. I can’t thank the Cape team enough. I’m so happy to be able to continue my relationship with Mazda, they’ve helped me so much. This is not going to sink in for a while – I can’t wait for next year!"