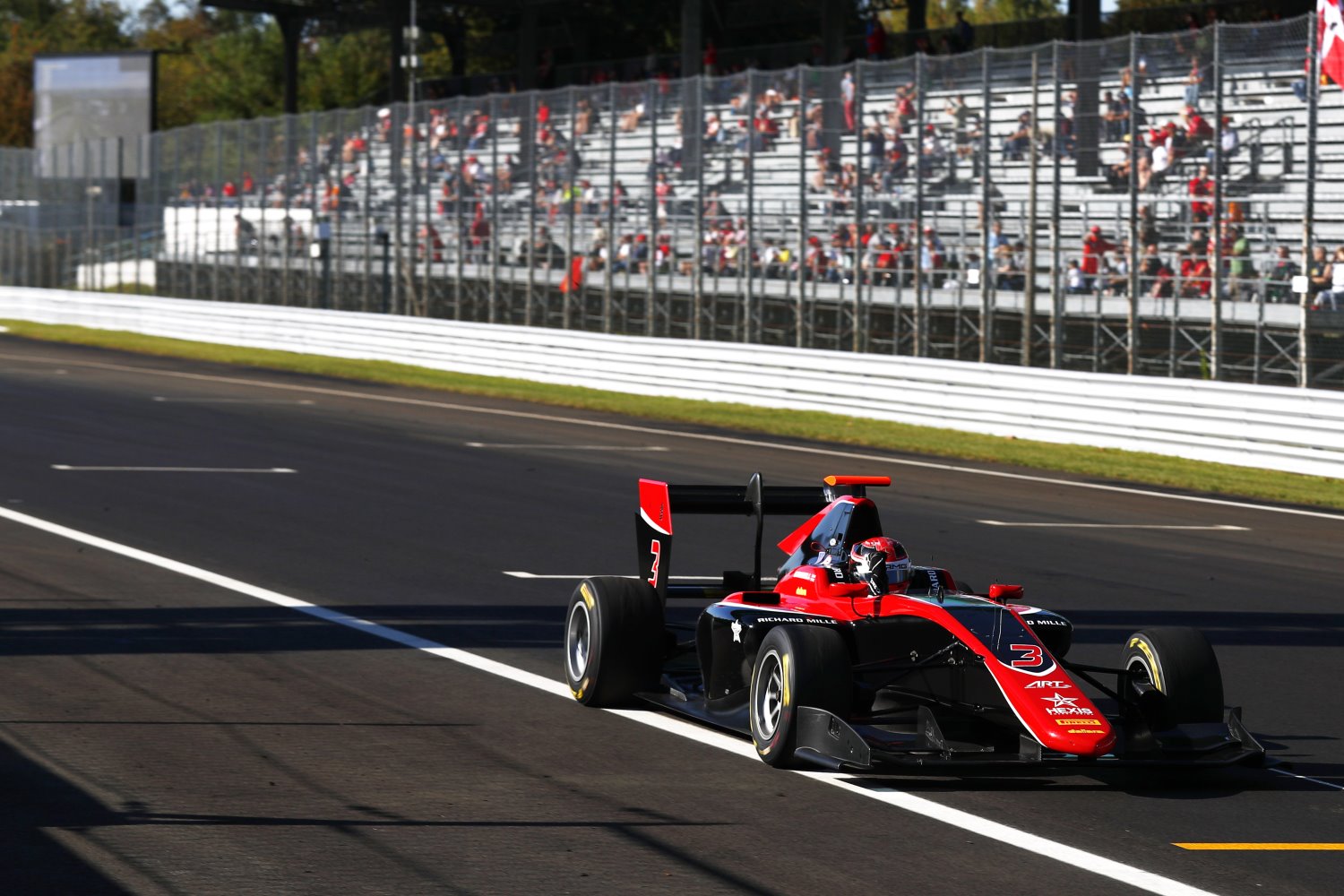 George Russell put the long wait for the start of Race 1 behind him by claiming a strong win in this morning’s race at the Autodromo Nazionale Monza, keeping his head while chaos reigned behind him to head home an ART 1-2-3 ahead of teammate’s Jack Aitken and Anthoine Hubert to claim the team’s 7th title in 8 seasons.

The Briton’s job was made easier when poleman Nirei Fukuzumi failed to make the start after getting stuck at the pit exit with an electrical gremlin: when the lights went out Russell eased away from the line with Hubert and Aitken squabbling behind him. At the Variante della Roggia Leonardo Pulcini and Alessio Lorandi came together, with the former riding the latter’s rear wheel all the way to the barriers: the safety car was straight out on track as the medical team extracted Pulcini from the car, who emerged shaken before heading to the medical center for the usual checks.

Repairs to the barriers meant it took until lap 9 for the race to run live, with Russell making an early getaway to lead his teammates down to turn 1, while behind them Steijn Schothorst and Niko Kari squabbled over best of the rest status, touching at Roggia but continuing the fight. Hubert had the pace over Russell after the safety car and squeezed by him at Rettifilo on lap 11, but it wasn’t to last as the Briton responded in kind 2 laps later, just before Juan Manuel Correa missed his braking and flew into the rear of teammate Arjun Maini, bringing out the VSC boards for the clean up.

There was a huge gap back from the ARTs to Kari in P4, who now had Raoul Hyman and a gaggle of drivers circulating ominously behind: the South African dropped like a stone at the restart while up at the front Aitken made a great restart at Parabolica to run side by side with his teammates before grabbing the lead at turn 1. But Russell was not going to accept it without a fight, running all over his teammate’s rear wing all lap long before getting a better run at Curva Grande and reclaiming the lead at Roggia on lap 16.

With the laps running down the race switched to a timed one, but the impact from Correa was starting to show on Maini’s rear wing: on lap 19 it disintegrated, forcing the Indian into the pits and retirement from P7, and when Kari tripped over the curbs at Lesmo 2 and found the wall there was little choice but to bring out the safety car once again for the final lap of the race.

Russell claimed the win to extend his lead in the drivers’ championship over 2nd placed driver Aitken, 162 points to 119, with Hubert P3 in the race and 4th in the title fight behind Fukuzumi, 99 points to 97. Siebert threaded his way through the chaos for an impressive 4th on track ahead of Ryan Tveter, Giuliano Alesi (5th in the championship on 95 points), with Tatiana Calderon finishing in P7 ahead of Julien Falchero, Kevin Joerg and Bruno Baptista.

In the teams’ title fight ART is untouchable with two rounds remaining on 463 points, from Trident on 222 and Jenzer on 116: following the rain delays yesterday the GP3 Race 2 was cancelled, with the teams now looking ahead to Round 7 of the championship in Jerez on 6-8 October, the penultimate round of the 2017 season.