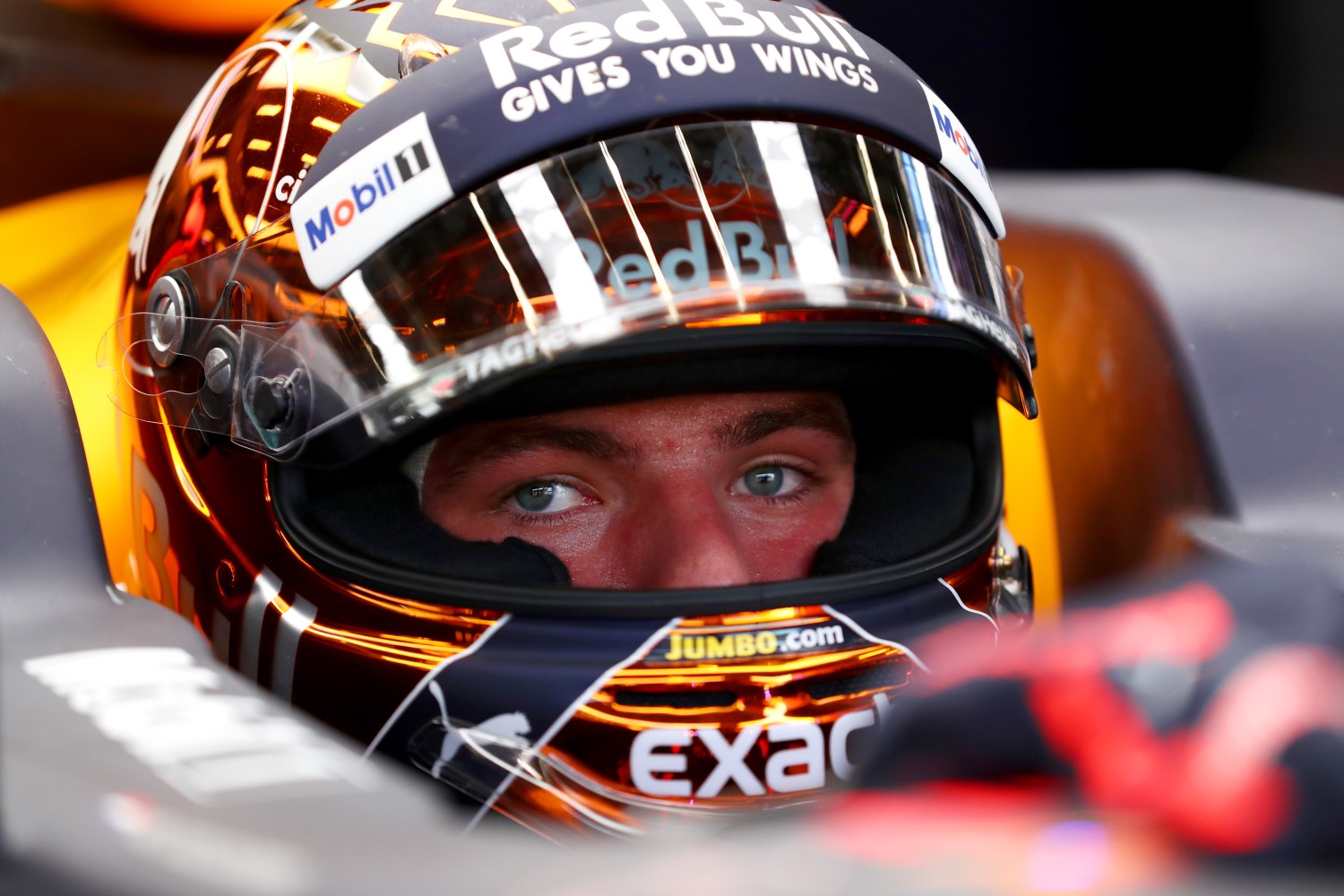 At Spa, in front of thousands of Dutch fans, the 19-year-old's car broke down for the sixth time in twelve races so far this year.

Engine supplier Renault got the blame.

"All we can do is put pressure on our supplier and say 'Get your act together'," said team boss Christian Horner.

"We pay a lot of money for this engine and we're not getting value."

Amid rumors he wants out of his contract before it ends in 2019, however, Verstappen pointed the finger at Red Bull.

"This doesn't happen in a top team," he said.

"At the start you can call it luck but it's no longer that.

"I don't know what the alternative is, but continuing like this makes no sense," Verstappen added.

Verstappen's father Jos also indicated that their patience with Red Bull is up.

"This cannot go on. It's unacceptable," he is quoted by Algemeen Dagblad newspaper.

"What it means for the future? I'm not saying anything about it now. We will have to calm down and sit down together, but it cannot continue in this way."

The energy drink company is known not only for producing great F1 talents, but also ruthlessly dropping youngsters who do not live up to expectations.

The latest to bite the dust is a Finnish 17-year-old by the name of Niko Kari, who was warned by Red Bull at the end of last year that his F3 season was not acceptable.

He was placed in the Horner-linked Arden team in GP3 this year, but has again disappointed his bosses.

"We will work with him until the end of the season. His performance has not been what we were expecting," Red Bull driver manager Helmut Marko told the Finnish broadcaster C More at Spa.

The Ferrari driver hit out at his penalties for failing to lift the throttle for the double waved yellow flags caused by Max Verstappen's retirement.

But his Finnish countryman Salo, a former F1 driver, defended his call.

"It's a rule — it was a double yellow," the former Ferrari driver, who was a FIA steward at Spa, told the Finnish broadcaster C More.

"We got information showing that everyone lifted the throttle with the exception of Kimi," Salo insisted.

"There were people on the track side of the fence pushing the car. Anything can happen and Kimi cannot make that judgment. A rule is a rule — it's that simple."

During the Spa weekend, alarming slow-motion footage showed the rear tires of some cars vibrating so severely under acceleration that parts of the cars broke off.

Pirelli technical boss Mario Isola said: "It only happened in two places — under acceleration in turns 1 and 19.

"Of course we saw the TV pictures, but we also saw data from some teams showing vibrations that we haven't seen before," he is quoted by Auto Motor und Sport.

"But after inspecting the tires we can say that everything is safe. The tires do not rotate on the rims — we can see this from markings and the position of the valves."

(GMM) Toto Wolff has played down a conspiracy theory triggered by comments made by Lewis Hamilton after the Belgian grand prix.

The Mercedes driver won at Spa, but only after a race characterized by intense pressure from Ferrari's Sebastian Vettel and controversial safety car periods.

"I felt it was like Nascar, with safety cars being pulled out for no reason," said Hamilton.

"They could have done a virtual safety car but I guess they wanted to see a race."

Hamilton argued that the safety car was deployed even though there was no debris visible on the track, but his boss Wolff gave FIA officials the benefit of the doubt.

"Maybe there really was debris on the track and it was not safe to continue the race," he said.

"The speed at Spa is very high and no one wants to see an accident because of pieces of carbon fiber on the track," the Mercedes chief added.

"I can understand Lewis' reaction, because he was trying to keep the gap to Vettel. But I think if he takes into account all the circumstances, he actually would have nothing against the use of the safety car."

(GMM) Fernando Alonso has tipped the future of the McLaren-Honda collaboration and his next move in F1 to be decided in "the next few weeks".

The Spaniard made his feelings about Honda's continuing problems clear at Spa, where over the radio he said using the Japanese power unit was "embarrassing".

Asked if McLaren needs to switch to a different supplier to convince him to stay at the team next year, Alonso answered: "Let's see how events develop in the next two, three weeks.

"I'm just the driver, so my job is to drive as fast as I can rather than make those decisions.

"I like this team," he insisted. "The last three seasons were difficult but McLaren is one of the best teams in the world.

"I would be glad to continue but we'll see what happens in the next few weeks."

The big rumor in Belgium is that Williams-Mercedes has made a clear offer to Alonso for 2018.

"I have nothing to say. Nothing new," he responded.

"The demand for my services is very high, which I can see from the proposals that I have received."

Kimi Raikkonen says his 10-second stop/go penalty for a yellow flag breach during the Belgian Grand Prix was "pointless" and doubts that many of his rivals backed off.

Raikkonen was hit with the sanction, along with three penalty points, for failing to slow sufficiently under double-waved yellows on the Kemmel straight, after Max Verstappen ground to a halt.

He admitted during his post-race media session that he did not lift along the straight, though felt it was not necessary, as the car was partly behind the barrier.

"I knew there was a yellow flag, but the car was kind of… at least halfway behind the barrier on the straight," commented the Ferrari driver.

"I didn't go faster. I didn't lift on the straight, but in my view it was pointless to get penalized for that.

"I completely understand when [a car] is on the side of the circuit, like on the proper side and there are people working on it, but this is what happened.

"I would be surprised if everybody else lifted.

"Luckily there was a Safety Car and we could recover something out of it, but it was not the easiest end of the weekend, but that's how it went."

After the aforementioned Safety Car, brought out when the Force India drivers collided, Raikkonen pounced on Mercedes' Valtteri Bottas to recover fourth.

"On the restart, I got a good tow from two cars, then [Daniel] Ricciardo went one side, Bottas was in the middle, and I just had just enough speed to get next to Bottas, and managed to go on the inside," he said.

"After that I never really had the speed advantage over the Red Bull; they [were] surprisingly strong in race conditions compared to what they have been the whole weekend.

"They had good speed in the right places always, and the lap times were pretty similar to what I was doing, but at least I got one place back."

Formula 1 has confirmed that this year's Belgian Grand Prix drew a record number of fans to Spa-Francorchamps, many in support of Max Verstappen.

A crowd of more than 265,000 (an increase of 11.8 per cent on 2016) packed the grandstands and grass banks, marking an outright record for a race at the Ardennes venue.

It coincided with an "improved" 'Fan Festival' returning to the paddock, with several new activities, experiences and competitions on offer to spectators.

"The record number of spectators that came to Spa-Francorchamps is very pleasing and shows that Formula 1 can really energize and grow audiences," said F1 commercial chief Sean Bratches.

"It was also great to see the spectators' enthusiasm for the initiatives in the Fan Zone: here in Belgium, mainly thanks to our collaboration with the Grand Prix organisers, the general public had even more to enjoy.

"As we have said right from the start of the season, we want to carry on down this path, as Formula 1 must get ever closer to the fans.

"Right from next week, we will be in Monza, another historic venue on the calendar and we will put even more effort into initiatives aimed at the fans, both at the track and off it."

Mick Schumacher also completed a demo run in the Benetton B194, which his father, Michael, drove to the 1994 title, during the build up to the race.

Esteban Ocon has hit out at Force India team-mate Sergio Perez after the pair twice came to blows during Sunday's Belgian Grand Prix at Spa-Francorchamps.

Ocon and Perez clashed on the opening lap on the run to Eau Rouge, with Ocon briefly bouncing into the air after being squeezed between Perez's VJM10 and the support pit lane wall.

Force India adopted a two-stop strategy and elected to pit Perez first, in a bid to minimize the impact of a five-second penalty he received for cutting Les Combes, having passed Romain Grosjean.

Ocon stopped shortly afterwards and came out behind Perez, questioning Force India's strategy, before launching an attack next time around with a better exit from La Source.

Ocon challenged Perez on the run towards Eau Rouge but the pair made contact, causing damage to Ocon's front wing and giving Perez a puncture.

Both drivers had to pit for repairs and Ocon went on to finish in ninth, while Perez retired from a non-points paying position late on.

"I accept the first one [on the first lap]; we are three wide, maybe he didn't see me, even if I think he saw me.

"The second one is just the one too much, risking our life for nothing… he risked my life in there at 300 km/h down by Eau Rouge, that's the first thing.

"He's supposed to be a professional driver, today he hasn't shown it, he hasn't done that with any other team-mates, I don't know why he's doing it with me."

When asked whether the respect was gone, Ocon said: "The feeling for sure is I'm going to go speak with him man to man and tell him the truth.

"He's going to have a child, I don't know if he wants to die or something, it's just ridiculous."

Perez apologized for the first incident, admitting that it was "100 per cent my fault", but described Ocon as "too optimistic" in their second clash.