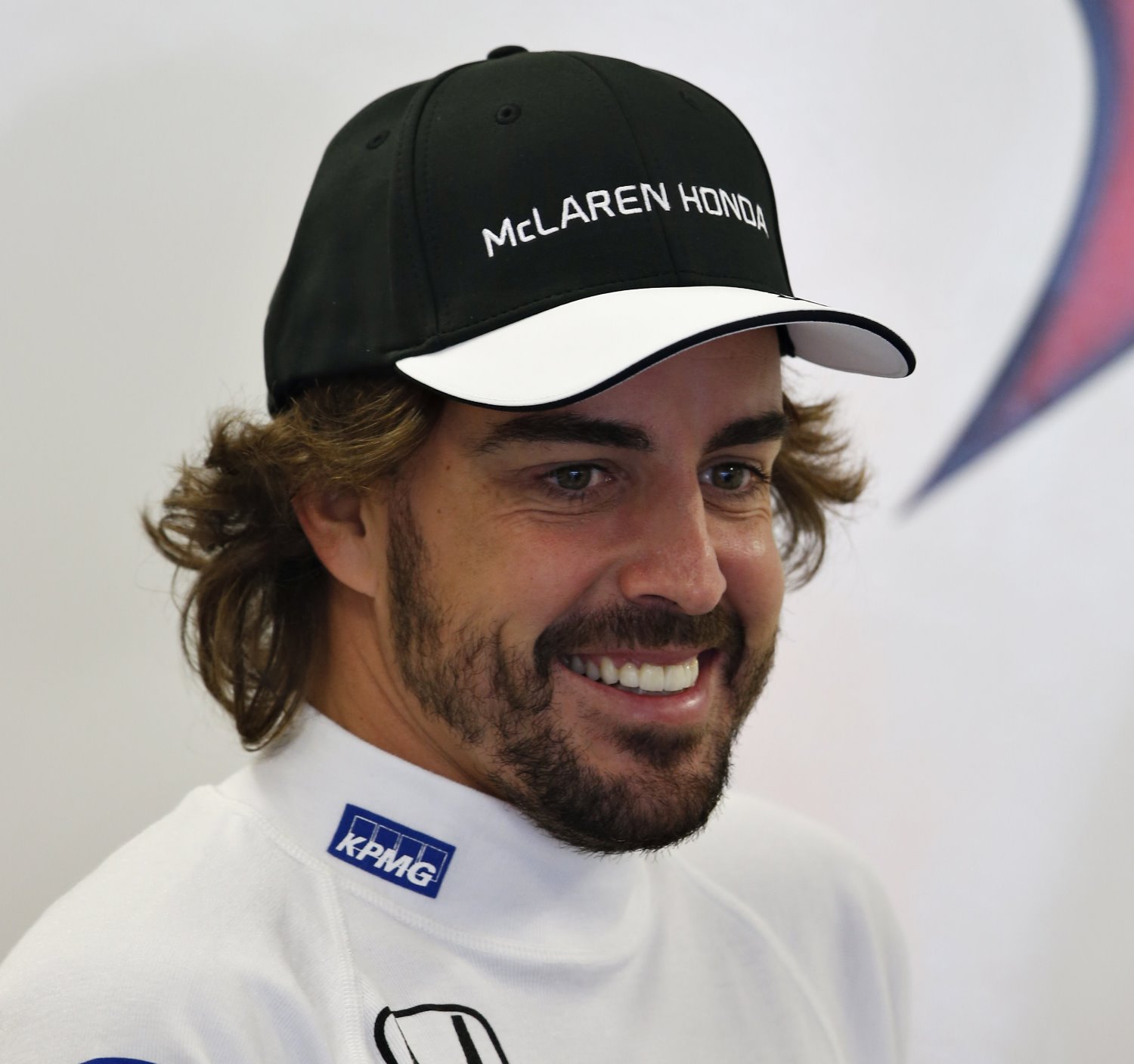 Recently, the likes of Nico Rosberg and Mark Webber have said they feel sorry for the Spaniard, who has struggled since 2015 with McLaren-Honda rather than raced at the front where he really belongs.

But when asked what advice he has for Alonso, F1 legend and Mercedes team chairman Niki Lauda said: "Nothing at all.

"He's where he is because he wanted to make a lot of money at McLaren."

It is expected Alonso will commit to a team only for 2018, so as to leave his options open for 2019 and beyond.

Mercedes, for instance, will have a key vacancy in 2019, as Lewis Hamilton's contract is expiring.

"We will soon be able to say something about 2018. Personally, I'm very satisfied with Bottas. I think our lineup is the strongest, because together Vettel and Raikkonen are weaker and Verstappen and Ricciardo are less stable," he added.

Lauda also denied that Max Verstappen and Sebastian Vettel have been targeted by Mercedes for the future.

"Verstappen is waiting for a top car and is disappointed now, but he must fulfil his contract," he said.

"Vettel will stay with Ferrari," Lauda added. "So it's not an issue for us."

(GMM) Red Bull is not happy with its second formula one team, Toro Rosso.

That is the admission of the energy drink company's key official Dr Helmut Marko, who is regarded as the closest motor racing confidante of Red Bull mogul Dietrich Mateschitz.

He said of Toro Rosso: "We bought the team because the regulations allowed the use of much the same chassis as another team. Then it was changed."

And he says the plan to develop Toro Rosso into a traditional F1 team has not quite worked out.

"A great investment was made in Toro Rosso," Marko told Brazil's Globo, "but they cannot materialize that into points.

"The drivers and the team make mistakes, as well as technical failures. The car, the package would be good enough for fifth, but they cannot do it," he insisted.

So when asked if Red Bull has thought about selling Toro Rosso, Marko answered: "I don't think it is the best time now because Liberty is talking about distributing money better so the smaller teams get more.

"That could turn out to be a good deal. But it's also true that at the moment the cost to Red Bull is very high," he added.

A more immediate issue for Toro Rosso is drivers, with Carlos Sainz coveted by Renault but under contract to Red Bull for 2018.

"Yes, we have been approached by them," Marko confirmed.

"Carlos has a contract with us. We will need to find a solution that satisfies us, as we invested heavily in his development."

Complicating the issue is that Renault is looking into getting Robert Kubica back up and running for 2018, but boss Cyril Abiteboul said at Spa that he is not sure the Pole is able to return.

"I believe we will have a clearer view of the outcome of this story at Monza," Marko said.

Another problem for Red Bull is that its driver programme appears to have stalled, even though Pierre Gasly is being linked with a Toro Rosso debut for 2018.

But apart from that, "There is no one at the moment", Marko admits.

"If you look at the other categories, apart from Leclerc there is no one. (Lando) Norris is very good but he also makes a lot of mistakes.

"What is really wrong is the number of categories," Marko said. "With less championships there would be a grid of 30, the level would rise a lot and we would see who is really good."

Hulkenberg and Magnussen famously fell out in Hungary amid the "suck my b-lls" affair, and at Spa-Francorchamps Perez admitted his fury after the Dane apparently swerved into him during practice.

Mexican Perez said he thinks Magnussen is "dirty" and brought up the issue in the FIA driver briefing.

"He just said that he didn't do anything," said Perez, "but we've seen Kevin react like this a few times.

"At the speeds we drive, it's not good as you could cause a big accident," the Force India driver told Ekstra Bladet newspaper.

"That's why I brought it up with Charlie (Whiting) and hopefully he remembers it because it's too late once there's a big accident," Perez added.

Honda chief Yusuke Hasegawa has revealed that the manufacturer planned to introduce a 'Spec 4' engine in Belgium, but failed to meet its timeframe.

Honda has been ramping up its development programme in a bid to convince McLaren to retain its services for 2018, following increased tensions over the first half of 2017.

Honda introduced a revised power unit concept, following two years of troubles, but its hopes were dashed by a lack of reliability and performance, leaving the partnership playing catch up once more.

Its 'Spec 3' power unit was trialled for the first time in Azerbaijan, raced by Stoffel Vandoorne in Austria, and has been used by both drivers across the past two Grands Prix.

Honda had hoped to use Spec 4 at Spa-Francorchamps this weekend, but has instead brought what it can, with Fernando Alonso running a 'Spec 3.5' and Vandoorne on 'Spec 3.6'.

"We had planned to introduce a Spec 4 engine here, but we failed," said Hasegawa.

"Actually we didn't match to the schedule, so we have a halfway upgrade.

"We called it 3.5 and 3.6, but I think we can introduce some decent upgrade here, but we don't stop the improvement."

Hasegawa believes that some progress has been made with the 'halfway upgrade', but conceded that exact improvements are difficult to measure.

"About the performance upgrade, it is very difficult to compare the previous engine to this engine because this is a completely different circuit," he said.

"But from the data point of view, we see some good upgrade of the performance here."

Ferrari-backed Formula 2 title leader Charles Leclerc says he hopes to make the jump into Formula 1 next year with Sauber, but stressed that his priority is on clinching the crown in the feeder series.

Leclerc graduated to Formula 2 this year as GP3 champion and has taken five victories and seven pole positions to open a 54-point advantage over Renault-affiliated rival Oliver Rowland.

Leclerc's form in Formula 2 led him to become an outside contender for Ferrari next year, but the team confirmed earlier this week that Kimi RÃ¤ikkÃ¶nen will stay on into 2018.

The Monegasque racer's best prospects ostensibly rest with Sauber, which cancelled its proposed Honda partnership in favour of closer ties with Ferrari.

When asked for the latest on his future by GPUpdate.net, Leclerc said: "Ferrari is looking for me for the seat, and I don't want to know anything about next year for now.

"I was expecting for Kimi to do another year in Formula 1, he deserves it, that's the way it is, I'm still quite young. For the first year to be in Ferrari straight away would be quite a big jump.

"I hope to be in the Sauber seat next year, we'll see how things go.

"For now, I'm fully focusing on Formula 2, and then we'll see at the end of the year what the opportunities are."

Sauber is the only team on the grid with no driver under contract for 2018.

Renault chief Cyril Abiteboul has confirmed that the manufacturer held talks with McLaren over a potential 2018 engine deal, but has dismissed the prospect of the teams forming a partnership.

McLaren, in the third year of its reunion with Honda, has sounded out rivals, amid the Japanese company's ongoing underperformance.

Abiteboul admitted that discussions took place, but insists Renault would not want to over-stretch itself, believing adding another partner would dilute its efforts.

"Well, the situation is we have a multi-year contract with Red Bull and Toro Rosso," he said.

"I can confirm there have been discussions with McLaren, but I know there is a restriction in the regulations if we wanted to supply more than three teams.

"In addition to that, I don't think it would be reasonable to believe that we could supply more than three [teams] without degrading the level of service, and the quality of the service.

"Frankly we have a contract in place, we value the relationship with Red Bull, it's an understanding relationship and [we] would like to carry this relationship until 2020.

"If there is something to be done, why not? But right now I understand things are very quiet and certainly they [McLaren] are not necessarily pushing for anything."

Vettel sure of gains after low-key first day

Formula 1 championship leader Sebastian Vettel says he "knows" he can go quicker after a low-key performance during practice for the Belgian Grand Prix.

Vettel, who enters the second half of the season with a 14-point advantage over Lewis Hamilton, finished third and fifth in Friday's pair of sessions, ending up almost half a second behind the Briton.

Vettel feels that Ferrari has the pace to compete at the front, but that he also has to improve his own performance.

"I am not entirely happy but overall I think the car is okay," explained Vettel.

"We just need to put a little bit more together. This is a long track, so it is not that easy to put everything together.

"I didn't really find the rhythm today but the long run was better.

"So, overall, the car is capable of being fast, but we need to get it right. I need to do my job and I know I can go faster.

"On Friday it is always difficult to judge the situation, because on Saturday it seems that everyone makes a step forward. If we can do that, then we can be very close.

"We are here to give a hard time to our competitors."

Kimi RÃ¤ikkÃ¶nen, meanwhile, topped the first session and finished as runner-up to Lewis Hamilton in the afternoon.

"There are things we have to go through to do better, as is the case with any Friday at any race circuit," he commented.

"There's no point now to start guessing what the others are doing, we'll see tomorrow in qualifying, but I'm sure we can be fast."

Williams has been given a fine of â‚¬10,000 after using tires outside of the allocated time limit on Lance Stroll's car during Friday practice for the Belgian Grand Prix.

Under current F1 regulations, drivers are allocated one set of tires for the first 40 minutes of FP1, to prevent rubber being preserved and fewer cars taking to the track.

At Spa-Francorchamps, drivers were allowed to use the initial set of tires for an additional nine minutes – the length of time lost due to a red flag period when Stroll's team-mate, Felipe Massa, crashed.

However, Stroll used the tires again for two further stints after the cut-off had passed.

"Having considered the facts, the stewards accept that the infringement was inadvertent," read a note from the stewards, announcing their decision.

"The stewards have taken due note of repeated offences concerning tires by the team and a similar infringement for which a suspended fine was imposed."

Williams also made a tire-related mistake at the 2015 Belgian Grand Prix, with one Medium and three Soft tires fitted to Valtteri Bottas' car during a pit-stop.