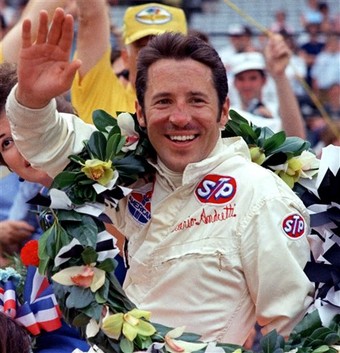 WATKINS GLEN, N.Y. – Dignitaries from the motorsports industry will join in tribute to Mario Andretti on Aug. 31 when he receives the Cameron R. Argetsinger Award for Outstanding Contributions to Motorsports.

Andretti will receive the award from the International Motor Racing Research Center at a sold-out dinner presented by NASCAR, International Speedway Corp., Watkins Glen International and IMSA, supported by Sahlen’s.

The award memorializes Cameron R. Argetsinger, founder and organizer of the first races at Watkins Glen. Roger Penske, a champion driver before launching a 51-year career as a team owner, was the 2016 Argetsinger Award recipient.

The honor will be presented by race-car driver and driving coach Peter Argetsinger, son of the late Cameron and Jean Argetsinger.

“Mario is someone who has put so much into racing as an individual and also as a great athlete and race driver," Penske said. “Mario is a winner. He’s got high integrity. He’s done so much for the sport.

“Cameron would be very proud to know that Mario is receiving this wonderful award."

Bobby Rahal, who serves as chairman of the Racing Research Center’s Governing Council, also will speak. Rahal is a three-time CART champion and one of only three to win the Indianapolis 500 as a driver and an owner.

“It's a great honor for me, not only as the chairman of the IMRRC’s Governing Council, but as a fellow racer, to be a part of this gala evening presenting Mario with the Cameron R. Argetsinger Award," Rahal said.

“When it comes to motorsports history, there is no name more familiar around the world than Mario Andretti. What an outstanding life and career he’s had. We're privileged to be here tonight to celebrate this incredible race-car driver, businessman and legend," Rahal said.

The evening will include the live auction of an original, commissioned painting by motorsports artist Randy Owens depicting significant cars from Andretti’s career. A silent auction will offer photographs of memorable Andretti moments and a variety of items from corporate leaders in the motorsports industry and the Finger Lakes Region of New York.

Two cars from Andretti’s history will be on display: the 1964 Kuzma Watson Indy roadster he drove in the mid-1960s, owned by Lawrence Auriana, and the John Player Special Lotus 79/1, team car to the Lotus 79 that Andretti drove to his World Championship in 1978, owned by Paul Rego of Regogo Racing. Also on display will be the IndyCar two-seater that Andretti now pilots, giving fans a thrill of a lifetime, courtesy of American Honda.

Andretti is considered by many to be the greatest driver in the history of the sport, posting victories at virtually every level of racing in a career that spanned five decades.

He is being honored for having advanced and improved the sport. The award recognizes Andretti for bringing prestige to motorsports and demonstrating commitment to the future of racing.

The dinner will be at the world-renowned Corning Museum of Glass in Corning, N.Y., and precedes the Verizon IndyCar Grand Prix at The Glen weekend at WGI.

The Racing Research Center, a 501(c)(3) charitable organization, is an archival library dedicated to the preservation and sharing of the history of motorsports, of all series and all venues, through its collections of books, periodicals, films, photographs, fine art and other materials. For more information about the Center's work and its programs, visit www.racingarchives.org or call 607-535-9044. The Center also is on Facebook and Twitter.